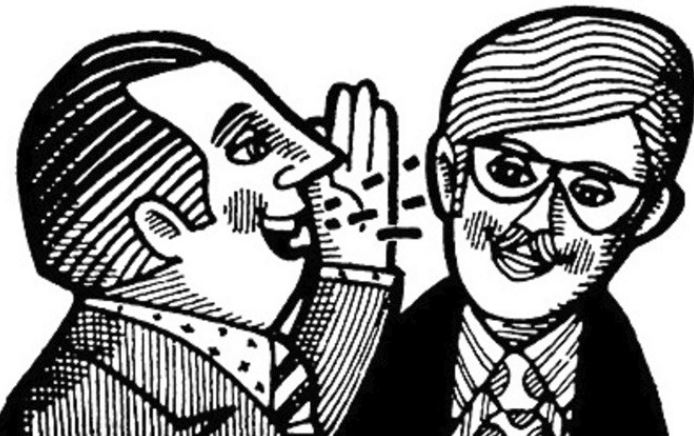 Recently, Southern Baptist pastor Rick Patrick faced public outrage over comments he made in a private forum about women, sexual assault, and the #metoo movement. His words made it out into the wild, and Patrick was forced to apologize several times for his offensive statements. I am sure that Patrick thought his words would be protected, but as President Trump has learned, offensive words said in private often make their way to the Internet. Such is the nature of the digital age.

Evangelical pastors are noted for preaching sermons against gossip and crude speech. Growing up in Independent Fundamentalist Baptist (IFB) churches, I heard numerous sermons about gossip, off-color humor, swearing, and even the use of bywords. (See Christian Swear Words.) My pastors told me that Jesus heard everything I said, and that come judgment day, he would hold me accountable for my words. What these men of God didn’t tell me is that when they were behind closed doors with their colleagues in the ministry, they routinely failed to practice what they preached.

Years ago, I was a participant on a Reformed Baptist discussion group. The group was private and had pastors and elders in its membership. It was common for group members to talk — Greek for gossip — about problems in their churches or the difficulties they were having particular members. We talked about and said things that would have proved to be embarrassing had they been made public. This group, at that time, was the Reformed Baptist version of the Catholic confessional. What was said was considered sacrosanct.

One day, as I was searching the Internet, I came across the “private” discussions from the group. Evidently, a programming mistake had made the group’s posts public instead of private. Horrified, I immediately notified the group administrators, and they fixed the technical problem. I thought, at the time, if church members and non-group clerics ever saw what we said, why, there would be all sorts of outrage and calls for discipline. Fortunately, my find saved the group’s collective bacon.

I was a pastor for twenty-five years. During my teenage years and my years in the ministry, I attended numerous pastor’s fellowship and conferences. These events allowed men of God to hang out with their own kind, giving them opportunities to talk shop and air their grievances. Most of these events featured a meal, either at lunch or before the evening session. It was during these meals that pastors would gather in smaller groups and “talk.” I have heard and shared countless stories about church problems. The gathered pastors where expected to commiserate with gossipers, and, if warranted, offer advice.

Thanks to being in the ministry for so long, I had a lot of preacher friends, including a few men I considered BFF’s. I would often visit my friends at their church offices or we would arrange to meet somewhere for a meal. Without fail, our conversations would turn to this or that problem, this or that contrary member, or one of the never-ending problems facing IFB and Evangelical churches. These discussions were often chock-full of information disclosed in private counseling sessions by church members or things overheard on the grapevine. The thinking was that sharing private information with colleagues in the ministry was okay. Who’s going to know, right?

Of course, I would know, and when I would later be asked to preach at the churches of my friends, I would have thoughts of what they shared with me over lunch or at one of our fellowship/prayer times. One pastor friend kept a dossier on every church member he talked to. He had become the pastor of a church filled with conflict and strife. The previous pastor had been accused of sexual assault (he later left the church and pastored elsewhere) and his wife had been accused of dressing seductively. The deacons ran the pastor off, and in came my friend. As is often the case when young, inexperienced pastors — it was his first and only pastorate — take on troubled churches, they become sacrificial lambs. There was so much lying and deception going on that my friend decided to write reports of every conversation he had with church members. Much like James Comey did with his discussions with President Trump, my pastor friend kept intricate records of every conversation. He would share some of these conversation with me. This, of course, colored my view of these people. I knew many of them by name, so when I was in the presence of such-and-such person, I thought of what my friend had told me about them.

I could spend hours giving anecdotal stories about private things I heard and said when I was in the safe circle of my ministerial colleagues. Some of these men would come and preach for me, so I am sure they had the same thoughts I did. Oh, there’s the couple Bruce said hasn’t had sex in five years. Oh, there’s the man who confessed to having secret homosexual desires. Oh, there’s the teenager who got caught getting drunk and having sex in a motel room.

Christian church members should be aware of this fact: most pastors are gossips; most pastors are going to talk out of school; most pastors think sharing secrets with colleagues is all part of effectively “ministering” to others. Unlike professional counselors, pastors are not prohibited from repeating what was said behind closed doors. Many readers of this blog have likely heard sermons that made use of what was said to their pastors in private. Their pastor might not name names, but there’s no doubt about who’s the subject of his sermon/illustration. IFB preachers, in particular, are noted for preaching passive-aggressive sermons using information spoken to them in private. Smart, attentive congregants know when the pastor in his sermon is talking to or about them. Going through a tough time in your marriage and pondering divorce, and you talked to your pastor about your feelings? If, on the next Sunday, he preaches a thundering sermon on the sin of D-I-V-O-R-C-E, who do you think he is talking to? Pastors often use their pulpits as whipping posts, attacking rumors, allegations, and private conversations. In the pastor’s mind, God is “leading” him to share the truth. In fact, he is a gossip or rumormonger sharing things said in private.

I hope you will keep what I have written here in mind the next time you think about unburdening yourself to your pastor. Your troubles may be gossiped about, talked about among his ministerial colleagues, or turned into sermon illustrations come Sunday. While not all pastors have loose lips, many of them do, and since there is nothing that prohibits them from “sharing,” people should weigh carefully what they say to a pastor, understanding that he may not protect their privacy or he may consider shooting the breeze with his pastor friends as a safe way to share secrets and get advice about how best to handle problems. It is on this issue that the Roman Catholics are right. What’s said in the confessional is privileged. When I first started seeing a counselor, I asked him about how he treated our discussions. He told me they were privileged, and he would never divulge what I said to him (and when several of my children saw him, he never divulged to me what they said).

Did you ever have a pastor use what you said in private as fodder for a sermon, or did you find out later that he gossiped about you to his pastor friends or other church leaders? Please share your experiences in the comment section.