Communion: Inquiring Minds Want to Know, Can Someone be a Christian and Gluten Intolerant?

Snarkiness ahead. You’ve been warned!

Those of us raised in Evangelical churches likely remember the Old Testament story about how God fed the Israelites with manna (bread) from heaven during the forty years they spent wandering in the desert (Exodus 16). Every morning, millions of Israelites would arise from their sleep to find the ground covered with God-sent manna. God commanded them to gather up enough manna to feed themselves that day. Any manna left to the next day, the King James Bible says, “bred worms, and stank.”  On the sixth day, the Israelites were commanded to gather up a double portion of manna. The seventh day was the Sabbath, and no work was to be done on this day.

In the New Testament, the writer of gospel of John speaks of Jesus being manna sent down from Heaven by God. John 6:48-58:

I am that bread of life. Your fathers did eat manna in the wilderness, and are dead. This is the bread which cometh down from heaven, that a man may eat thereof, and not die. I am the living bread which came down from heaven: if any man eat of this bread, he shall live for ever: and the bread that I will give is my flesh, which I will give for the life of the world. The Jews therefore strove among themselves, saying, How can this man give us his flesh to eat?  Then Jesus said unto them, Verily, verily, I say unto you, Except ye eat the flesh of the Son of man, and drink his blood, ye have no life in you. Whoso eateth my flesh, and drinketh my blood, hath eternal life; and I will raise him up at the last day. For my flesh is meat indeed, and my blood is drink indeed. He that eateth my flesh, and drinketh my blood, dwelleth in me, and I in him. As the living Father hath sent me, and I live by the Father: so he that eateth me, even he shall live by me. This is that bread which came down from heaven: not as your fathers did eat manna, and are dead: he that eateth of this bread shall live for ever.

All Christian sects believe that there are at least two sacraments: baptism and communion (Lord’s Supper, the Eucharist). In this post, I want to focus on the sacrament of communion. Common to communion practice is the use of wine (or Welch’s grape juice if you are teetotaling Baptist) and bread (crackers, wafers). Often, the bread is unleavened. Roman Catholics, in accordance with John 5:53-56, believe that when they eat a communion wafer they are literally eating the body of Jesus and when drinking the communion wine, believe they are drinking the blood of Jesus (transubstantiation). It is for this reason that priests must consecrate the bread and wine, miraculously changing it into the flesh and blood of the Son of God.

Lutherans take a different approach to communion, one deemed heretical by the Catholic Church (consubstantiation). Lutherans believe that the when they take communion, the wine and bread supernaturally become the body and blood of Jesus without materially changing.

Baptists and other non-Catholic, non-Lutheran sects believe that communion is meant to be a memorial, a reminder of Jesus’ flesh-and-blood sacrifice on the cross. Baptists find justification for their communion belief in Luke 22: 19,20:

And he [Jesus] took bread, and gave thanks, and brake it, and gave unto them, saying, This is my body which is given for you: this do in remembrance of me.  Likewise also the cup after supper, saying, This cup is the new testament in my blood, which is shed for you.

Calvinistic Baptists prefer to use Mark 14:22-26 or Matthew 26:26:30 as their communion proof texts because these passages refer to Jesus’ blood being shed for many, thus proving, in their minds, the doctrine of limited atonement (or particular redemption). Nah, nah, nah, Jesus didn’t die for everyone!

Many Christian sects, both Calvinistic and non-Calvinistic, believe that communion is a ‘means of grace’ — a way in which God confirms his grace among his people.  Wikipedia’s article on the ‘means of grace’ explains it this way:

The means of grace in Christian theology are those things (the means) through which God gives grace. Just what this grace entails is interpreted in various ways: generally speaking, some see it as God blessing humankind so as to sustain and empower the Christian life; others see it as forgiveness, life, and salvation.

In 1 Corinthians 11:23-32, the Apostle Paul writes to the Church at Corinth about the practice of communion. Here’s what he had to say:

For I have received of the Lord that which also I delivered unto you, that the Lord Jesus the same night in which he was betrayed took bread: And when he had given thanks, he brake it, and said, Take, eat: this is my body, which is broken for you: this do in remembrance of me. After the same manner also he took the cup, when he had supped, saying, this cup is the new testament in my blood: this do ye, as oft as ye drink it, in remembrance of me. For as often as ye eat this bread, and drink this cup, ye do shew the Lord’s death till he come. Wherefore whosoever shall eat this bread, and drink this cup of the Lord, unworthily, shall be guilty of the body and blood of the Lord. But let a man examine himself, and so let him eat of that bread, and drink of that cup. For he that eateth and drinketh unworthily, eateth and drinketh damnation to himself, not discerning the Lord’s body. For this cause many are weak and sickly among you, and many sleep. For if we would judge ourselves, we should not be judged.  But when we are judged, we are chastened of the Lord, that we should not be condemned with the world.

In Baptist churches, this passage from 1 Corinthians 11 is often read before churches take communion.  Congregants are asked to examine themselves before taking communion, rooting out and exposing any sin in their lives. People who take communion with unconfessed sin on their accounts risk God making them sick or killing them for their disobedience. 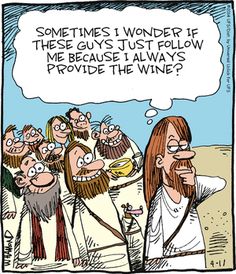 In my Calvinistic days, I took the whole “unconfessed sin” very seriously. One Sunday, I preached two sermons on confessing and forsaking sin. Come Sunday night, after I served up a second helping of fear and guilt, it was time for communion. I told the solemn, sober crowd that only those who were willing to confess and forsake ALL sin should take communion. We had a lot of smokers in the church at the time. I said to them, if you are going to go home light up a cigarette after church, then you aren’t serious about forsaking your sin. I went on to mention several other common sins among the faithful, and then I asked those who were ready to take communion to please come forward. No one moved, not even my wife and children. I had so put the “fear” of God in them, that none of them wanted to risk God’s judgment. I quickly closed the service with prayer, knowing that I had to rethink my communion strategy come next week. The next Sunday evening, I apologized to the church, explaining to them that I had taken things too far, and that none of us, including Pastor Bruce, was without sin. Normal communion practice resumed and, as far as I know, God did not afflict anyone with sickness or death.

This is the place where I must confess how big a hypocrite I could be as a pastor. One summer Saturday evening, my sons and I attended a STARS dirt track race at Midway Speedway in Crooksville, Ohio. All the big-name drivers were there, and we arrived early so we could get good seats. Part way through the race, it began to rain, forcing the night’s events to be postponed to Sunday. No, I thought, NOT Sunday. Not the Lord’s Day. Not during the time we held our evening service. I knew I couldn’t skip church. What would everyone think of me if I skipped church to go to a race? I quickly cooked up in my mind a way to “do” church and still make it to the races. I announced during Sunday morning church that we were having an oh, so special Sunday night service at an earlier time. No preaching, no singing; just communion and testimonies about God wondrous saving grace. Sure enough, my scheme worked, allowing us to make it to the rack track on time. I had twinges of guilt over my communion plan, but once the races started, all thoughts of bread and wine faded, and into my nostrils came the sweet, sweet smell of racing fuel.

In 1994, I was the co-pastor of Community Baptist Church in San Antonio, Texas. (See I am a Publican and a Heathen) Community was a Sovereign Grace church, as was Hillburn Drive Grace Baptist Church, a nearby church pastored by Jose Maldonado, a former member of Community. (See Jose Maldonado Says I Never Was a Christian) One Sunday night, I preached at conference held at Hillburn Drive. During the service, the church had communion. I thought, as a visiting pastor and friend, that it would be okay for me to partake of communion. Maldonado came to me and let me know that their church practiced closed communion, so I would not be permitted to join them in communion.  Everyone in the building, save me and a friend of mine from Ohio who was also preaching that night, took communion.

Regardless of what the bread/wine is or means or who is allowed to partake, all Christian sects believe that taking communion is essential to Christian faith and practice, and believers who do not take communion are being disobedient to God and his commandments. I should note, in passing, that there are some hyper-dispensationalist Evangelicals who believe that communion was commanded in a previous dispensation and is not to be practiced in this present dispensation. Other than a few outliers, Christians believe communion to be a vital part of their worship of the Christian God. Whether taken (or offered for those who don’t like the use of the word taken) weekly, monthly, quarterly, annually, or whenever we get around to it, communion is practiced by hundreds of millions of Christians. Of course, Lutherans think Catholic and Baptist communion is heretical. Catholic think the same about Baptist and Lutheran communion, and Baptists think that all sacraments but theirs are anathema. So much for there being ONE Lord, ONE Faith, and ONE Baptism (Ephesians 4:5).

So, having written the previous 1,800 words, all I really want to know is this: Can someone be a Christian and gluten intolerant?

That’s it! Now you know everything you will ever need to know about communion. I’ll take mine B positive and rare the next time I take communion at a local blood cult.