Worldnet Daily, home to a plethora of right-wing Evangelical writers and nut jobs, warns that an upcoming solar eclipse is a warning sign from God:

A solar eclipse coming on March 20 won’t just be an astronomical wonder – it will be an event that may be unprecedented in human history, according to biblical experts who say it is an unmistakable sign of judgment.

Root Source Ltd., which provides Christians access to Jewish teachings online, reports the eclipse will darken the sun just in time for the sunrise at the North Pole, where it will be visible for two minutes.

Such an astronomical event only takes place once every 100,000 years, experts said.

In an exclusive interview with WND, Root Source co-founder Bob O’Dell pointed to the significance of an eclipse visible from the North Pole at this particular time.

“The North Pole can’t really be called the territory of any particular nation or people,” O’Dell said. “This is likely a message from God to the entire world.”

He also believes the path of the eclipse is significant.

“The total solar eclipse continuously hovers over water and ice. I’m reminded of Isaiah 11:9 – which tells us that ‘None will harm or destroy another on My entire holy mountain, for the land will be as full of the knowledge of the LORD as the sea is filled with water.’”

Root Source co-founder Gidon Ariel, an Orthodox Jew, is calling for people around the world to pray for two minutes starting at 10:18 a.m. Greenwich Mean Time. Ariel will be praying at the Western Wall in Jerusalem at a time of day that Jewish tradition reserves for prayer in the Temple.

In a written statement, Ariel commented, “While a worldwide call to prayer is not typical for Jews like myself, the concurrence and rarity of this natural event, together with the times in which we live, points to prayer as being the right response to such an amazing natural event that might indicate the finger of God in history.”

The solar eclipse is already causing concern even in the secular world. The vast majority of the sun’s rays will be blocked in Europe during the event, and experts are warning of possible power shortages in nations that rely heavily on solar power.

Pastor Mark Biltz, author of “Blood Moons: Decoding the Imminent Heavenly Signs,” sees a heavenly warning in the consequences of the eclipse, especially for the northern Europeans, who will be most affected.

In an exclusive interview with WND, Biltz explained, “In Jewish tradition, a total solar eclipse is a warning to the Gentiles and a sign of judgment on the nations. When we look at where the darkness will be, it will be in northern European countries like England and Sweden where we see the rise of Islam and anti-Israel sentiment. Europeans especially should take heed.”

Biltz also sees significance in the timing of the solar eclipse.

“An event of this magnitude at the very beginning of the religious new year demands attention. As the Bible tells us, there will be signs in the heavens on the feast days, and this is a very significant sign on a critical day.

“It’s the same day that there was the grand-opening ceremony of the tabernacle of Moses, with fire from heaven lighting the altar. Historically, this is a day of judgment.”

Biltz is the original discoverer of the four Blood Moons, a concept heavily promoted by pastor John Hagee. Biltz points out that the total solar eclipse comes in the midst of these Blood Moons and that there will be another heavenly sign only weeks after the eclipse.

“This comes at a time when American aid for Israel has become an important political issue in the United States. But Israelis know they cannot put their survival in the hands of one who wishes their demise.

Biltz also points to other upcoming signs that will take place on feast days. There will be another solar eclipse on The Feast of Trumpets, on Sept. 13, 2015.

The final blood moon, a “super blood moon,” will appear during the Festival of Tabernacles, which is also known as a period of judgment for all the nations. Biltz believes that this is a sign that momentous events are in motion.

“The last time there were four blood moons in a row, it was 1967 and Israel captured Jerusalem,” Biltz said. “The time before that occurred just after the re-establishment of Israel. Christians need to be aware of these facts in order to understand what is happening in the world today.”

The blood moons teaching is receiving increased attention in the Christian community. Root Source is launching its own online educational course and ebook to educate both Christians and Jews about the blood moons…

World Net Daily is a defender of young earth creationism. If they follow Bishop James Ussher’s chronology, the earth is 6,019 years old. How then, can an event that happens once every 100,000 years be a warning sign from God? According to the nutters and wing nuts at World Net, the universe is only 6,000 or so years old. This means that there has been NO solar eclipse like the upcoming one on March 20th.

And when God’s judgment fails to fall as these false prophets say it will? By then, they will be on to other warnings and signs from God.  They are never called upon to account for their false prophecies. They’ve made their money off the gullible, and a few years from now, they will cook up another prophetic scheme so they can bilk sincere, ignorant Christians out of their money. 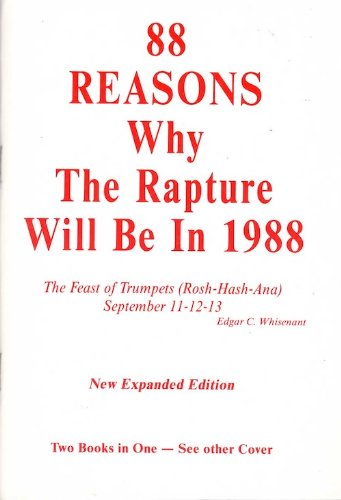 27 years ago, Edgar Whisenant published 88 Reasons Why the Rapture Will Be in 1988. Almost five million copies of the book were given away or sold. Here we are, three decades later. Whisenant, repeatedly redid his “Biblical” calculations and said the rapture would occur in 1989, 1993, and 1994. He died in 2001 without ever seeing Jesus split the eastern sky.

Before him, crackpots like Hal Lindsey and Jack Van Impe  traveled the county preaching the soon return of Jesus. While I will still in high school, Van Impe, the walking Bible, came to Findlay, Ohio to hold a crusade. Thousands flocked to hear him preach. I remember hearing Van Impe emphatically state that the Russian flag would be flying over the US capitol in 1976. In the 1980’s Hal Lindsey warned that the 1980’s were going to be it. Then he said that it was doubtful that Christians would be on the earth after the year 2000. (remember the Y2K scare and religious fanaticism?) Both of these hucksters have been wrong over and over, yet their bank account balance continues to grow. 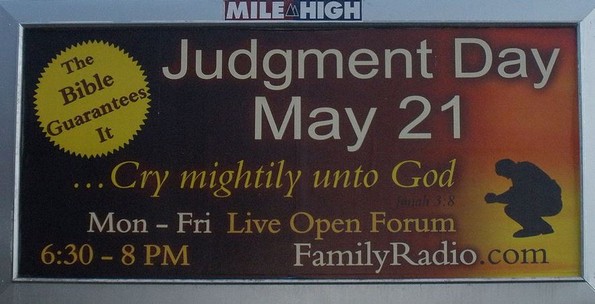 And who can forget 2011, the year billboards appeared all over America warning that Jesus was coming again on May 21, 2011. Harold Camping, using the fund raising powers of his Family Radio empire, raised millions of dollars so he could warn the world of its soon to come demise. After May 21st came and went, Camping revised the date to October 21, 2011. Camping died in 2013 without ever seeing Jesus in the clouds coming to snatch him away.

Sites like World Net Daily and men like Hal Lindsey and Jack Van Impe prey on Christians who are fearful about the future. As they watch Christian America slide headlong into secularism and same-sex marriage, they find themselves wondering if the rapture could happen soon. No amount of common sense and reason will persuade them otherwise. Their trusted eschatological sources can’t be wrong! After all, their predictions are straight from the Bible. But, they are wrong. They have always been wrong. If these false prophets lived in Old Testament times they would have been long ago stoned to death.

Evangelicals, who are inherently fundamentalist, are conditioned to accept even the most ludicrous of ideas and beliefs. Taught to belief the Bible is an inerrant, infallible, and inspired book and taught that pastors and evangelists are the mouthpiece of God, they surrender their rational thinking skills and embrace the kinds of craziness found in the World Net Daily article. There is no hope for them until they realize that the Bible is not what their pastor says it is. Until they are willing to let go of inerrancy/infallibility/inspiration, they will continue to be easy marks for a 21st century version of Sinclair Lewis’s Elmer Gantry.

While I think Jack Van Impe and Hal Lindsey are in it for the money, Edgar Whisenant and Harold Camping were sincere, well intentioned believers who became obsessed with prophecy.