…”It is unconstitutional for a government entity to fly a flag with a patently religious symbol and meaning on its grounds,You must take immediate action and refrain from hoisting this flag up the flagpole at the city hall building.”…

…“It conveys the message to the twenty-six percent of the U.S. population who are not Christians that they are not ‘favored members of the political community,’”…

Gilchrist said that the threat of a suit is what ultimately resulted in the removal of the flag.

“That would just about ruin us,” Gilchrist stated. “I have to look out for the best interests of the city.”

He said that he believes that the threat of suit is how the group strong-arms cities into compliance with their wishes.

“That’s what they do, they pick on these smaller towns that can’t defend ourselves,” Gilchrist said, noting that he personally did not want to remove the flag.

It was later given to local restaurant owner Jeff Word, who raised the flag outside of Big Chief Restaurant.

The Etowah County Chapter of First Responders for Christ soon decided to organized a rally in support of the flag’s original presence at Glencoe City Hall. Approximately 100 people turned out for the event on Saturday, which featured Rep. Mack Butler and state Sen. Phil Williams, as well as Thom Harrison, pastor of North Glencoe Baptist Church.

“We weren’t called to sit back and watch and not say a word. We’re called to go out and proclaim the gospel among all nations,” Williams declared.

Williams pointed to the Christian heritage of the nation, such as the daily presence of a Congressional chaplain since 1789 and the motto “In God We Trust,” first printed on currency in the 1800’s.

“This country and our laws were founded on Judeo-Christian principles that are literally written in stone at our nation’s Capitol, and that history cannot be overlooked or undone,” organizer Samuel Lowe told the Christian Post. “They can remove the flag from the pole, but the Christian roots of our nation’s origin can never be denied.”

“On the surface, the flag removal appears to be a battle over the fictitious separation of church and state,” he said, “but the underlying reason the flag was removed was due to the separation between God and man because of the sin that’s in man’s heart.” 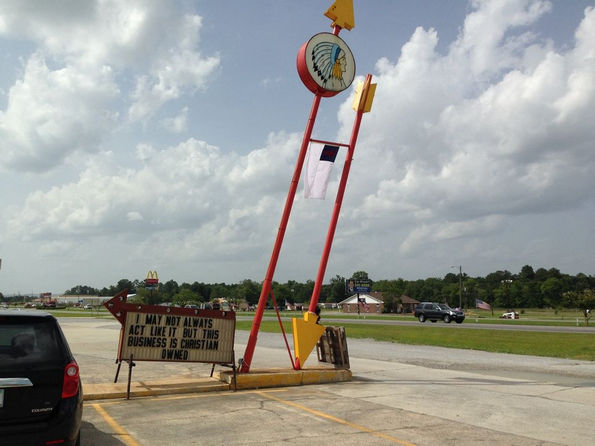 I am at a loss about why Christians have a hard time understanding the establishment clause and the separation of church and state. Jeff Word, the owner of Big Chief Drive-In and the man who took ownership of the flag, understands, in part, that there is a difference between government endorsement and private freedom. Word stated:

“I think our freedoms are leaving us gradually, as we once knew them. It was one person that took prayer out of school. I felt like I needed to be that ‘one person’ in this case. I feel like I’m a private businessman and it’s my right to fly the flag.” 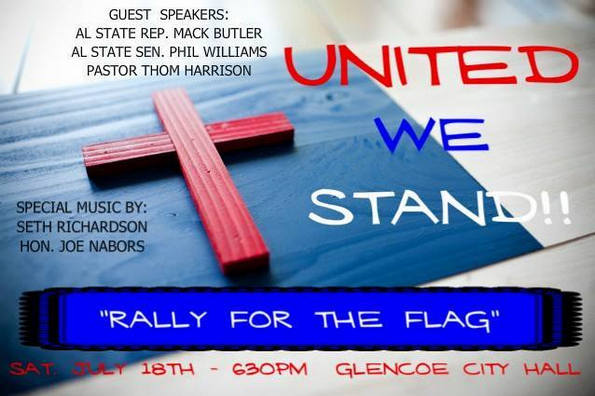 Correct, as a PRIVATE citizen, any American may fly any flag they wish, including the Christian or Communist flag.  The protestors, standing on a public sidewalk, the freest piece of real estate in America, have every right to protest and wave the Christian flag. No one stopped them from exercising their constitutional right to freedom of religion. What Christians in Glencoe find upsetting is that they no longer have a seat at the head of the cultural table.  They pine for the 1950’s, failing to realize that most Americans have moved on.

One hundred people showed up for the Rally for the Flag.  ONE HUNDRED  out of 5,000 Glencoe residents. Thom Harrison, pastor of North Glencoe Baptist Church was there, yet most of his church members didn’t show up. What’s clear is that, even in the middle of Baptist country, Evangelicals no longer draw large numbers of people to their cause; especially when it has to do with a sectarian flag illegally flying in front of a government building. While several Republican state politicians showed up for the rally, I highly doubt either of them will be offering up legislation any time soon “legalizing” the flying of the sectarian Christian flag on government property. Such an attempt would be quickly ruled unconstitutional by the courts. I suspect  Representative Mack Butler and Senator Phil Williams attended the rally because of the optics and both are up for election in 2016 and 2018. Both Butler and Williams are Baptist.