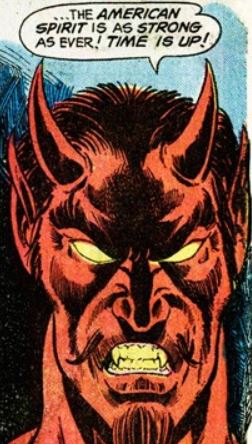 Tim Wildmon, president of American Family Association, had this to say yesterday on the Point of View radio program:

“God made a special carve-out, if you will, in the late 1700s to create this new country called the United States of America. It was all birthed out of biblical values or, as my dad calls it, the mind of Christ [for the purpose of spreading] the Christian Gospel all over North America and then we spread the Christian Gospel all over the world. And by ‘we,’ I mean American Christians.” “This is a spiritual war for America and I think Satan hates America because America has spread the Gospel around the world and we still have a majority Christian nation. That’s my view. I can’t prove it but I think that’s why we’re so engaged and we see so much going on for our country’s future.”

First, I find it interesting that Wildmon ignores the first hundred years of American history. Why is that? Perhaps he  wants to steer clear of the genocide perpetrated by America’s first settlers on Native Americans. Or perhaps he wants to distance himself from the fact that commerce and trade were the primary reason settlers migrated to America.

Second, there is little to no evidence for the United States being “birthed out of biblical values.”  Wildmon is taking his fundamentalist beliefs and attempting to read them back into history. He, like David Barton, scours history for evidence to bolster his claim. So far, the evidence is scant and I don’t expect any to be forthcoming. Certainly, some of the founders of the United States were Christians, but I seriously doubt that any of them were Evangelical. Many of them were deists.

Third, commerce and control of taxation were the primary reasons for the founding of the United States. The tea thrown into Boston Harbor was not tossed overboard because of a lack of religious freedom.

Fourth, America has not spread the gospel all around the world. The vast majority of world citizens are NOT Christian.  And those who are belong to sects that Wildmon likely thinks preach a false gospel. (i.e. Roman Catholicism) According to a 2012 Pew Research report:

There are an estimated 285,480,000 Evangelicals, corresponding to 13.1% of the Christian population and 4.1% of the total world population. The Americas, Africa and Asia are home to the majority of Evangelicals. The United States has the largest concentration of Evangelicals.Evangelicalism is gaining popularity both in and outside the English-speaking world, especially in Latin America and the developing world.

According to Operation World, there are about 550 million Evangelicals in the world. Regardless of which number is used, Evangelicals are 4-8% of the world’s population. So much for “spreading” the good news of the gospel. The true gospel of the United States is capitalism. When IN GOD WE TRUST was put on our money they left a word out. It should have said In THIS God we Trust.