Domestic Violence in the IFB Church 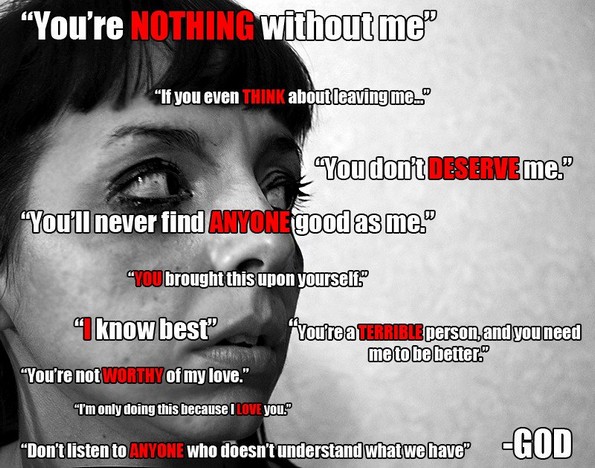 Domestic Violence in the IFB Church

Domestic violence can be defined as a pattern of behavior in any relationship that is used to gain or maintain power and control over an intimate partner.

Abuse is physical, sexual, emotional, economic or psychological actions or threats of actions that influence another person. This includes any behaviors that frighten, intimidate, terrorize, manipulate, hurt, humiliate, blame, injure or wound someone.

Does the Independent Fundamentalist Baptist (IFB) church movement have a domestic abuse problem? The short answer is Yes!

The IFB church movement is built on a foundation of emotional and mental manipulation and abuse. This is seen in how parents discipline their children and how husbands lord over and control their wives. These behaviors are often modeled by IFB pastors, deacons, and church leaders as they manipulate, control, and dominate church members.

And therein lies the problem. The abuse and violence are institutionalized to such a degree that it is considered normal. People are so used to seeing it that they never consider whether such behavior is appropriate. IFB church members are familiar with having their “toes stepped on.” They are accustomed to fire and brimstone, naming names, calling sin “sin,” sermons. They are used to aggressive behavior from their pastors. It seems quite normal to them. Those of us who were raised in the IFB church movement understand this. It took us getting away from it to see how manipulative and abusive it  is. The waiting rooms of mental health professionals are crowded with people whose mental wellness and self-esteem were ruined by Fundamentalist religion.

For those of us who spent decades in the IFB church, we know that the deep mental and emotional scars left by our time in the IFB church never go away. We learn to come to terms with our past and try to do the best we can going forward. We are marred, even broken, yet somehow, we find a way to pick up and move forward.

This is why some of us speak so openly about the IFB church movement and its manipulative and abusive tendencies. We don’t want ANYONE to experience what we experienced. When we see someone gravitating towards Fundamentalism we try to warn them as we would warn a person who is driving towards a cliff. Stop! Turn around!  Sadly, many people ignore these warnings and often pay a heavy price, emotionally, mentally, and sometimes physically, as a result.

Here is what many IFB pastors preach to their church members:

Now, none of these things, in and of  itself, necessarily lead to domestic abuse. However, add to this the IFB church preoccupation with sin and the portrayal of God as a violent deity who will whip them if they disobey, and you have a recipe for not only domestic abuse but also child abuse. I have watched more than a few IFB church members and pastors beat the hell out their children with a belt, switch, or paddle. I remember hearing of one parent who picked up a 2×4 and beat his two teenage girls with it. Why? The teen deliberately disobeyed him by riding the church bus home instead of going home with him.

I have admitted my own violent, abusive methods of correcting my three oldest children. Fortunately, I abandoned these practices with my three youngest children. My oldest sons routinely got thrashed for disobeying their parents. I corrected them this way because I thought that is what God wanted me to do. The books I read said this was the proper way to discipline children, and every big-name preacher I heard preach said I was doing right by my kids when I whipped them. Is it any surprise then, with Bible-sanctioned brutality against children and a violent God who uses violence to chastise disobedient IFB church members, that violent behavior spills over into the relationship between the husband and his submissive wife?

I can’t say that I know of many instances where a husband physically beat his wife. It happened, but not very often, to my knowledge. I know of a few pastors’ wives who were physically abused by their pastor husbands. The pastors were men of God in the pulpit, but at home they  were violent disciplinarians who ruled over their wives and children with a rod of iron. Most of the abuse I saw was more of the mental and emotional type. If the woman wasn’t submissive enough or didn’t put out sexually, she would pay for it. If she dared to have ambition, want to work outside the home, or go to college, she would be put in her place and reminded of God’s divine order for the home.

I have often said, I don’t know how ANY woman stays in the IFB church. Well, I do know. Women are afraid. They fear disobeying God, their husbands, and their pastors. They fear God will chastise them if they dare step outside the role God has ordained for them.  And so they stay and suffer the abuse.

Let me give an illustration of how this is perpetuated from the pulpit:

Years ago the church I was pastoring joined together with other IFB churches to hold a joint revival meeting. The speaker was Bill Rice III. (I am almost certain it was Bill Rice but it could have been Pete Rice, both were associated with the Bill Rice Ranch.) One night, Bill Rice preached on the subject of marriage and divorce. Rice did not believe there were any grounds for divorce. He said that even if a husband was beating on his wife, the wife should stay in the marriage. Perhaps she would win her husband to Jesus by her willingness to stay in the marriage. Rice intimated that saved husbands don’t beat their wives.

By the time of this meeting my views had already begun to change and I pulled our church out of the meetings. I was incensed that Rice was advocating a woman endure beatings by her husband , the implication being that God wanted her to do so.

As my wife and I traveled beyond the IFB church movement, we had to relearn what it meant to have a healthy marital and family relationship. Ultimately, it took getting away from Christianity altogether for us to find wholeness.

I am not suggesting that every husband in the IFB church movement is abusive or that every father abuses his children when he disciplines them. I am suggesting that IFB theology encourages manipulation, violence and abuse, especially of the mental and emotional variety. Personally, I don’t think the IFB church movement is good for anyone. The extreme Fundamentalism found in the movement is emotionally and mentally harmful and people are better off finding other Christians sects to be a part of; sects that don’t view women as being inferior and don’t see children as chattel. I am of the opinion that the best thing that can happen to the IFB church movement is that it dies a quick death. It is dying, but it is dying slowly. I am all for smothering the movement in its bed.

Over the years, I have watched a number of women break free from domestic violence. They decided their own personal self-worth and happiness was more important than supposed obedience to God, the Bible, the pastor, and their husbands. Most often, gaining their freedom required them to divorce their husbands.

Let me head off  those who might suggest that the reason there is domestic abuse and child abuse in the IFB church movement is because they misinterpret the Bible. I don’t think this is the case at all. I think abusers are being consistent with their beliefs and they accept the Bible as written. After all, the Bible does command a father to beat his children with a rod. The Bible does command the wife to be submissive to her husband and to be a keeper of the home. And let’s face it, the Bible is a written record of the violence God pours out and will yet pour out on all those who do not worship or obey him. The good news is that many Christians ignore or explain away vast parts of the Bible. They know beating children is wrong. They know demanding a wife submit to her husband is demeaning. They wisely reject such things.

Do you have a story to tell about domestic violence? What did you experience growing up in the IFB church? What went on in your IFB home when the doors were closed? Please share your thoughts in the comment section.