So Much Good Has Been Done in the Name of Religion 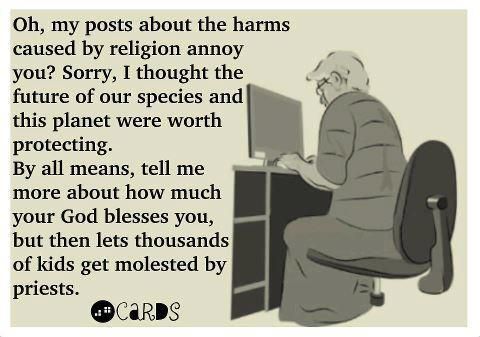 But so much good has been done in the name of religion too.

This is one of the arguments I would quite happily never hear again for the rest of my days. It’s the apparent riposte of choice whenever someone has the temerity to draw attention to the downright formidable list of sins attributable to religions or religious institutions. Beginning from A for Appalling Atrocity, one could easily go through the alphabet many times over in an attempt to produce even a marginally comprehensive report of these misdeeds. Alas, the effort would most likely be come to nothing, for the inevitable reply would merely be “yes, it is true, all that took place, but it also inspired so much good“.

At the risk of appearing forward, I must state this is without a doubt one of the most vacuous and insipid arguments I have ever encountered. Any truth there is to it, is a truth of the most trivial and banal kind, so much so that it bears great resemblance to the infamous claim by McDonald’s that their food is nutritious, since it contains nutrients. Yes, one can say people have been inspired to do good because of their religion, but has that good truly amounted to more in the grand scheme of things, than those vaunted McDonald’s nutrients? Do the few, aged onion slices really make up for the throat-clogging fat and the pink slime? In short, does it, and has it ever, made up for all the misery, suffering and all-round horribleness which can unquestionably be laid at religion’s doorstep? Do good intentions really cancel out abhorrent outcomes? And if McD’s doesn’t get away with appealing to all the good nutrients contained in their products, why should religion be allowed to use this frankly rather outrageous claim to get a free pass?

You know, the fascists did a lot of good things too. They reduced unemployment, they made the infrastructure work, they restored order in society. I’m sure some Stalinists were very kind and loving to their families. The inquisitors and puritans who made it their life mission to hunt down, torture and kill heretics, no doubt had the very best intentions with regard to the future and well-being of all humankind. Many paedophile priests or ministers were reported to be well-liked and appreciated shepherds to their flocks, doing many a good deed and performing many a needed service. An inordinate proportion of men who abuse their partners are known to be very charming and impressionable with everyone else, and such good, dependable men too. Yet, do we excuse these people for the less than stellar aspects of their behaviour, based on “all the good” they have done? No, no, no, no, and all too often yes, respectively. Religion however, does get to hold this permanent get-out-of-jail-free trump card. Why?

Why are Magdalene laundries and Irish reform schools ignored? What about the Catholic Church actively shielding paedophiles? Or lying to poor people in Africa about the efficacy of condoms in prevention of AIDS? The US government at the behest of religious elements instituting a global gag rule on the topic of abortion among all NGO’s receiving their funding? The evangelicals fomenting war(s) in the Middle East in the hopes of bringing about WWIII, the Armageddon and the second coming of Christ? The incalculable and frankly philistine destruction of culture and artifacts perpetrated by missionaries? The active pursuit to keep women forever as not even second class citizens? Denial of Anthropogenic Global Warming (AGW) and the abject refusal to do anything about it, as it can’t  possibly be true, because “God alone is in control of the planet”? Or is this all too abstract perhaps? What about refusing sick people life-saving medical procedures because they would amount to “playing God”? Bullying individual members to give up their autonomy, belongings and anything else the holy people deem offensive to the divinity? Forcing families to completely cut off apostates or those designated as such, at the threat of eternal damnation? Actually physically harming individuals, who dare to step out of line too much? Female genital mutilation (FGM), suttee, honour killings, witch hunts? I could go on, for pages on end. And do not for a moment think this doesn’t happen any more, or that it doesn’t happen in our beloved civilized west. I will be more than happy to point to actual cases. Note, that I have purposefully selected mostly modern examples here. The sheer carnage is by no means limited to history books, I assure you.

Yet all the above is conveniently swept aside with a few small words, “but a lot of good too”. What that amounts to is a brazen claim that all the above and then some doesn’t really matter. It isn’t really that important at all, as it is generously counterweighted by soup kitchens, second hand shops, schools, orphanages, etc. Incidentally, that all too often means soup kitchens where a captive audience is proselytised to, or schools where children are mentally and physically abused. But look at all the good that has been done! Surely that means all the less savoury aspects are worth it in the end? Yes, I am sure that’s an inordinate comfort to those on the receiving end of those less savoury aspects. I ask you, what other institution in the history of humankind, would get such a leeway?

The fascists are rightly denounced today, despite their purportedly accurate train schedules. Sincere belief in the goodness of one’s actions excuses few people, and gratifyingly often a few good qualities aren’t enough to rescue people who are harmful to others from social opprobrium. We are willing to do this, but religion still gets to appeal to its shiny side and wash away all its sins. So what’s the difference?

Perhaps a hint to a possible answer is in the fact, that other people who frequently escape consequences for their behaviour are those in power. Husbands supported by patriarchal structures, sports heroes supported by adoring fans, billionaires supported by their buddies in business, politicians supported by party machines and so on. They couldn’t possibly be held responsible for what they’ve done; after all, they are otherwise so good (or rich, successful, handsome, etc.)! Those in power do not want the proles to get all uppity and attempt to apply the same rules to them as are applied to the proles. Those without power adore and idolise those in power, declaring that their heroes can’t be all bad and should therefore have their transgressions excused. Possibly also hoping against all good sense that the world is just and therefore those people would never get that far, or the institutions would never have survived this long, were their existence not, in the end, mostly a good thing for the rest of the world.

It is well known that history is written by the winners. It would seem to me, that not only has religion been one of the great winners over time, but that it still is writing the history today.