Christians Say the Darnedest Things: Women Are the Property of Their Husbands by Larry Solomon 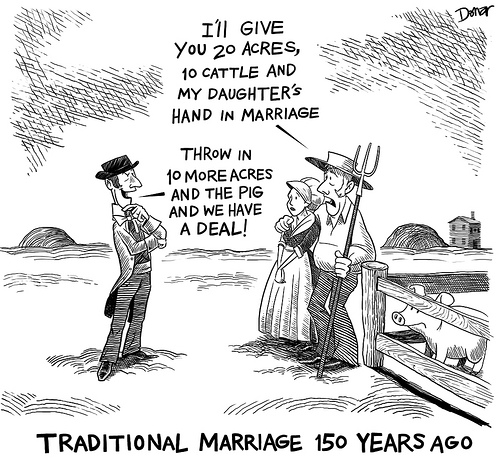 God made wives the property of their husbands.

There are some relationships in Scripture where the submission of one to another does not involve the ownership of one by the other. Examples of this would be the Biblical admonition to citizens to submit to civil governments and for church members to submit to their church leaders.  God does not give governments ownership rights over their citizens and he does not give church leaders ownership rights over their members. These two spheres of authority are limited in their powers and jurisdictions.

But God established some spheres of human authority where ownership of human property is either allowed (such as slavery under certain circumstances) or ownership is simply implied such as the relationship between a father and his children or a husband and his wife.

The ownership of the wife by the husband is confirmed in the 10th commandment where a man’s wife is included in a list of his possessions:

Again in the book of  Deuteronomy a man’s wife is included in his possessions:

There are many that falsely attack the Bible based on these and other passages saying that the Bible makes a woman a possession that is no more valuable than cattle(Exodus 20:17) and a peace of land (Deuteronomy 20:5-7).

Another way of saying their argument is “If a woman is owned by her husband then she has no value as a person”.

But this could not be farther from the truth.  While it conflicts with our modern values a person can be owned by another and yet have great value. The Bible says “Who can find a virtuous woman? for her price is far above rubies.“ (Proverbs 31:10). I don’t know about you – but I think rubies are far more valuable than a house, cattle or a vineyard!