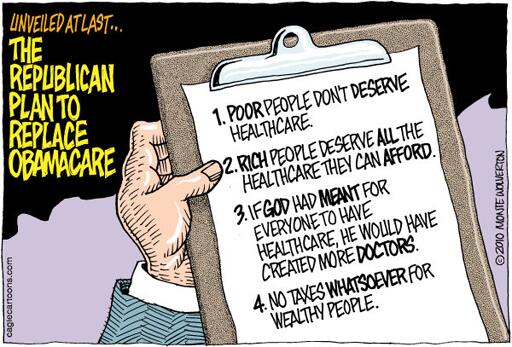 Congressional Republicans are waging a full-scale war against the health of poor and working-class Americans. Their battle plan is quite simple:

The Republicans who oppose the current Senate healthcare bill do not object because they want Americans to have better healthcare. What they want is a complete dismantling of the federal government, including any laws and regulations that govern healthcare. These Ayn Rand-loving Libertarians don’t care one whit about whether Americans live or die or whether any of us has affordable insurance. Left to their own devices, these Republicans will destroy the social progress of the past sixty years, remolding America into a fiefdom where the rich and major corporations rule the land. The difference between people such as I and these Republicans is that we actually care about the welfare of the American people and these Republicans don’t. Their concern begins and ends with their wallets. Ironically, most of these Republican are Christians, people who supposedly follow Jesus and keep his commandments. Evidently, these human-hating Republicans have never read Jesus’ words about riches and how those of means should treat the poor. 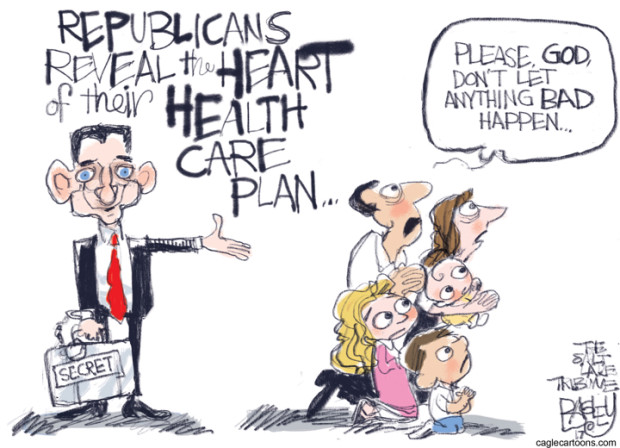 The solution, of course, is to raise taxes, and provide single-payer health insurance for all Americans — rich, poor, and working class. It is time we take the profit out of healthcare. People should not have to look at their bank balances before deciding to seek medical treatment. As it stands now, even those of us who have healthcare are facing astronomical rises in insurance premiums, deductibles, and drug costs. The only sure way to make certain that all Americans have comprehensive, affordable healthcare is to burn to the ground the current system. This means, first, voting out of office any Republican or Democrat who continues to suckle at the teat of the healthcare industry. These “leaders” of ours cannot, as Jesus said, serve two masters. You will love the one and hate the other. And as it hands now, it sure looks like the ruling class hates poor and working-class people.