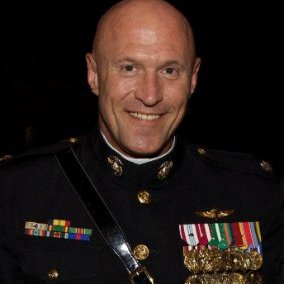 Todd “Rhino” Tomko, a disgraced U.S. Marine colonel and pastor of Parkview Church in Quincy, Illinois, was charged this week with “three counts of indecent liberties with a child, three counts of aggravated sexual battery and one count of cruelty.”

Joshua Miller, a reporter for the New York Post, writes:

A former commander of the Marines’ Wounded Warrior Regiment has been charged with sex crimes involving three children in Virginia, police said.

Todd Shane Tomko, a 54-year-old former Marine Corps colonel, was arrested last week in his hometown of Quincy, Ill., where he had been serving as the pastor of Parkview Church following his court-martial and forced retirement from the Marines Corps in 2016 amid accusations of inappropriate sexual contact with subordinates, the Quincy Herald-Whig reports. [Tomko court-martialed over sexual improprieties, Jesus forgives him, and church hires him as their pastor…amazing]

Tomko was arrested on charges of three counts of indecent liberties with a child, three counts of aggravated sexual battery and one count of cruelty, Virginia Beach police spokeswoman Linda Kuehn told the Virginian-Pilot.

Tomko, according to the Washington Post, was sentenced to 60 days’ confinement and fined $10,000 after pleading guilty during his court-martial to conduct unbecoming of an officer and a gentleman for having an inappropriate contact with enlisted subordinates, including a female Marine corporal.

Tomko also pleaded guilty to possessing anabolic steroids and testosterone, with the majority of the allegations occurring when he was stationed with the Wounded Warrior Regiment in Quantico, Va. Tomko had been relieved of his command there in February 2015 after the allegations surfaced, the Washington Post reported.

Tomko, whose 33 years in the Marines included a tour of duty in Afghanistan, said during the court-martial that he was diagnosed with post-traumatic stress disorder just months after he was relieved from the Wounded Warrior Regiment. But he had been struggling for years, Tomko said.

Last year in February, Col. T. Shane “Rhino” Tomko was relieved of his duty after only being in that position for approximately six months. He was relieved by Marine and Family Programs Director Brig. Gen. Russell Sanborn “due to a loss of confidence in his leadership,” in a statement released by Maj. Rob Dolan, a spokesman for Marine Corps Manpower and Reserve Affairs.

A preliminary hearing in the case was scheduled for March, but later postponed, according to the Quincy news. No calls were returned to the news source by the Marine Corps.

Tomko was charged by the Corps with “abusive sexual contact, obstruction of justice, illegal possession of steroids and other crimes,” as listed in the news piece. It detailed charges of Tomko being accused of “sexually assaulting a female Marine corporal in October 2014 by forcibly kissing her on the mouth and later making derogatory remarks about her.”

It also listed other charges of previous sexual assault complaints against Tomko, in the past — one in which was in the civilian courts but was later withdrawn in January after an administrative complaint was upheld.

Tomko had come to the regiment after a year-long tour as the 2nd Marine Division’s operations officer out of Camp Lejeune, North Carolina. He enlisted in 1983 and has experience as an infantryman and special operations officer according to reports.

Todd Tomko, a United States Marine, faced a judge Tuesday morning in Virginia Beach’s Juvenile and Domestic Relations court,
requesting a bond be set in the case against him.

Tomko is charged with seven felonies; three counts of custodial indecent liberties, three counts of aggravated sexual battery with a victim under the age of 13 and one count of endangerment and cruelty to children.

The 54-year-old served in the USMC for 33 years, some of it as an infantry officer and the final part of his career with the Wounded Warrior Battalion.

Defense counsel said Tomko has three children who live in Germany with his ex-wife. Jarrett McCormick, his lawyer, said Tomko is not a threat to society and not a flight risk but the Commonwealth’s Attorney argued against setting a bond.

Court records show Tomko had three victims, all known to him. In court the judge denied the defense counsels request for bond.

Tomko’s attorney said he plans to appeal his bond hearing and the case will likely go on front of a judge again on Monday. At that time a preliminary hearing date will be set.