Quote of the Day: The True Meaning of Christmas by John Hardin 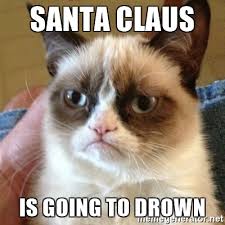 My partner, Amy Gustin, had a great idea the other day. This is not at all unusual for her. A lot of my columns begin with one of her great ideas, and this is one of them. The other day, Amy was perusing some books about the cave paintings at Lascaux and Chauvet while contemplating the flora and fauna of Ice Age Europe, and speculating about the Paleolithic origins of certain pagan European Christmas symbols, when she said this: “Environmentalists should take over Christmas.”

“What?” I replied. She explained that a lot of European pagan Christmas symbols celebrate the Boreal Forest and an arctic climate. We have Christmas trees. Christmas is the only time of year when snow is popular, and Santa lives at the North Pole and gets around on a sled pulled by caribou. All of these things remind us of the arctic, and they should remind us that the arctic is undergoing dramatic changes due to global climate change.

Can you think of a better symbol for global climate change than Santa Claus? First, he drives a zero-emission, carbon-neutral vehicle, and he’s been doing it for centuries. Second, everything Santa owns faces imminent destruction, unless we can stop the sea ice from shrinking. Santa, Mrs. Claus, all of the elves and the whole toy factory are headed straight for a watery grave at the bottom of the ocean unless we stop global warming now.

Coca-Cola has done a great job of making the polar bear into a symbol of Christmas, and we should adopt that symbol wholeheartedly. Instead of Mary, Joseph and Baby Jesus, put a mother polar bear and her two cubs in your nativity scene. I’m all for wise men, if you can find any, but how wise can your men be if they’re standing next to a hungry polar bear?

The global climate crisis effects everyone, and it’s time to make Christmas into a holiday for everyone. From now on, Christmas is about the North Pole and the gift of a stable climate. Being born doesn’t get you a holiday, in my book. Jesus has a holiday — it’s the one he lived and died for, and Christians should go ahead and do Easter big. But Christmas is too important to let Christians hog it to themselves. Besides, Christmas is better without Jesus.

We’ve still got Santa Claus, but now Christmas is about saving Santa. We’ve got reindeer and sleigh bells, snow and Christmas trees and we’ve got all of the animals coming together to help their friend the polar bear. We’ve got the Nutcracker to help us crack the nut of global climate change, and we can re-edit the Charlie Brown Christmas Special so that Linus’ big speech reflects the holiday’s bold new direction. Everything you love about Christmas will still be there for you, but now Christmas has a mission.

— John Hardin, Like You’ve Got Something Better To Do, The True Meaning of Christmas, December 18, 2017