Christopher Hitchens, My Son and a Story

Guest post by Logan.  You can read his blog at Life After 40: Reflections on Life and Faith After 40.

I heard today that Christopher Hitchens died on this date [December 16] back in 2011. I was technically still a Christian at that time. But today, I am very grateful for the impact that Hitchens made on me, my oldest son and the world. He is missed.

With this being an anniversary of sorts, I thought I’d share a little story that involves Christopher Hitchens, my son and the start of my journey.

The year was 2009. I discovered that my oldest son had bought and read Hitchens’ book entitled God is Not Great. As a Christian, I was offended. “What!? How dare this man write a book with such a title!” I also certainly didn’t like the notion that “religion poisons everything”.

After discovering the book in my son’s room, I lightly skimmed it but I was literally too scared to seriously read it. I feared for my soul and the potential influence of the book.

So what did I do?

Using a poor attempt at humor, I printed up a fake book cover entitled “Atheism, And the Morons who believe it” with a fictional author name of “I.B. Wright”. I put the fake cover over a Scott Adams’ book (probably a Dilbert book).*

I wrote something stupid on the back page cover too, a feeble attempt to support my revised book title. I left my creative work in my son’s room for him to admire.

My son took a picture of my handiwork and posted it to the atheism group on reddit. 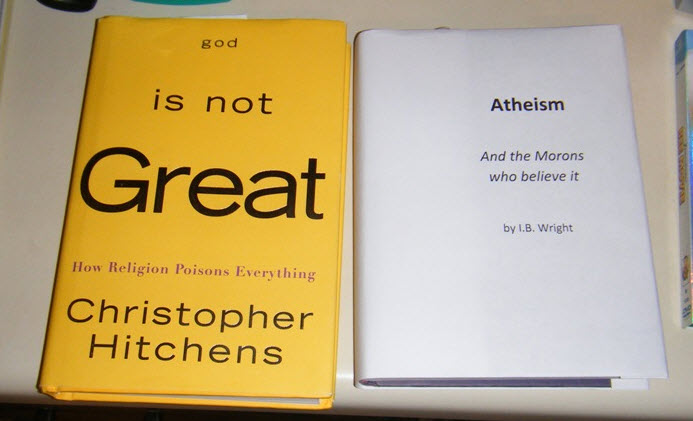 His post got over 1000 points, which in the Reddit world, is quite a lot. I didn’t know about the Reddit posting for quite a while, but after discovering it and reading through the comments, I was skewered. Severely. And rightly so.

The text I put on my back cover said: “In Mr. Wright’s latest book, I.B. shows that God is truly good and that through His son, Jesus, the world was rocked by a mere three years of ministry that culminated in Christ rising from the dead, which skeptics have been unable to disprove or rationally dispute.”

I look back on all of this with embarrassment. Unfortunately, indoctrination shuts off critical thinking, and I was very indoctrinated during my early years. I’m just grateful now that my son didn’t hide his change in beliefs and that eventually, I broke the spell. And as Christopher Hitchens said so well, religion poisons everything.

Tonight I will raise a glass to the late Hitchens.

* It was ironic for me to use a Scott Adams book since Mr. Adams is an atheist (which I didn’t realize at the time).