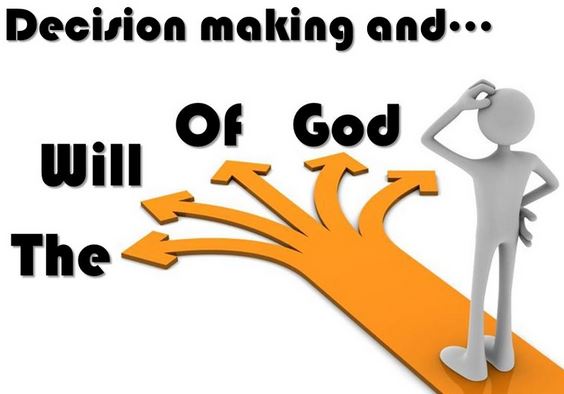 Many Evangelicals have a decidedly convoluted, complex process they follow when making decisions. In their minds, it is essential that this process be followed lest they be accused of missing or being out of the will of God. The goal is for every decision to line up perfectly with the will of the Almighty. In Romans 12:1,2, Christians are commanded to seek after the perfect will of God:

I beseech you therefore, brethren, by the mercies of God, that ye present your bodies a living sacrifice, holy, acceptable unto God, which is your reasonable service. And be not conformed to this world: but be ye transformed by the renewing of your mind, that ye may prove what is that good, and acceptable, and perfect, will of God.

And if Evangelicals find the perfect will of God, that one true God promises to answers to their prayers. 1 John 5:14,15 says:

And this is the confidence that we have in him, that, if we ask any thing according to his will, he heareth us: And if we know that he hear us, whatsoever we ask, we know that we have the petitions that we desired of him.

When Evangelicals are faced with an important decision, here’s the process they follow:

It is only after following this process that Evangelicals can know for sure that they are following the perfect will of God. Some Evangelicals turn to putting out fleeces or casting lots when this process still leaves them with doubt about the rightness of a prospective decision. Both are found in the Bible.

And Gideon said unto God, If thou wilt save Israel by mine hand, as thou hast said, Behold, I will put a fleece of wool in the floor; and if the dew be on the fleece only, and it be dry upon all the earth beside, then shall I know that thou wilt save Israel by mine hand, as thou hast said. And it was so: for he rose up early on the morrow, and thrust the fleece together, and wringed the dew out of the fleece, a bowl full of water. And Gideon said unto God, Let not thine anger be hot against me, and I will speak but this once: let me prove, I pray thee, but this once with the fleece; let it now be dry only upon the fleece, and upon all the ground let there be dew. And God did so that night: for it was dry upon the fleece only, and there was dew on all the ground. (Judges 6:36-40)

Let me give you a bit of context. The Israelites, those oft-sinning followers of Jehovah, disobeyed Jehovah and he punished them severely for their sin:

And the children of Israel did evil in the sight of the LORD: and the LORD delivered them into the hand of Midian seven years. And the hand of Midian prevailed against Israel: and because of the Midianites the children of Israel made them the dens which are in the mountains, and caves, and strong holds. And so it was, when Israel had sown, that the Midianites came up, and the Amalekites, and the children of the east, even they came up against them; And they encamped against them, and destroyed the increase of the earth, till thou come unto Gaza, and left no sustenance for Israel, neither sheep, nor ox, nor ass. For they came up with their cattle and their tents, and they came as grasshoppers for multitude; for both they and their camels were without number: and they entered into the land to destroy it. And Israel was greatly impoverished because of the Midianites; and the children of Israel cried unto the LORD. (Judges 6:1-6)

Jehovah impoverished the Israelites because of their sin. Modern day followers of the Christian God must really be living right because they are definitely not impoverished.

For seven years, God pummeled his followers with the judgment stick. At the end of the seven years, the Israelites cried out to God and God sent a prophet to ask them if they had had enough of his judgment.

After the prophet left, an angel came to an Israelite named Gideon. The angel and Gideon had a conversation:

Angel: The LORD is with thee, thou mighty man of valour.

Gideon: Oh my Lord, if the LORD be with us, why then is all this befallen us? and where be all his miracles which our fathers told us of, saying, Did not the LORD bring us up from Egypt? but now the LORD hath forsaken us, and delivered us into the hands of the Midianites.

Angel (or Lord): Go in this thy might, and thou shalt save Israel from the hand of the Midianites: have not I sent thee?

Gideon: Oh my Lord, wherewith shall I save Israel? behold, my family is poor in Manasseh, and I am the least in my father’s house.

Angel (or Lord): And the LORD said unto him, Surely I will be with thee, and thou shalt smite the Midianites as one man.

Gideon: If now I have found grace in thy sight, then shew me a sign that thou talkest with me.

God gave Gideon the sign he requested and Gideon went forth to be a messenger for God, for a while.

It seems that Gideon’s skeptical side kept getting in the way. He wanted to make sure it really was God speaking to him, so Gideon asked God to prove to him he really was God.

Gideon put a fleece of wool on the floor. He said if the fleece was wet in the morning and it had not rained (or dew covered the ground) outside he would believe what God had said.

Sure enough, the fleece was wet in the morning. Did Gideon believe God? Nope. Skeptical Gideon asked for more evidence.

Gideon reversed the fleece experiment. He said if the fleece was dry in the morning and there was dew on the ground outside he would believe what God had said.

Sure enough, the fleece was dry in the morning.

In Acts 1, the disciples of Jesus were having trouble deciding who should take Judas’ place as an apostle. After praying on the matter, the disciples decided to cast lots — the equivalent of pulling straws to see who gets the short straw — to determine who would be numbered among the eleven apostles. Verses 24-26 state:

And they prayed, and said, Thou, Lord, which knowest the hearts of all men, shew whether of these two thou hast chosen, That he may take part of this ministry and apostleship, from which Judas by transgression fell, that he might go to his own place. And they gave forth their lots; and the lot fell upon Matthias; and he was numbered with the eleven apostles.

Evangelicals can follow this process and conclude that God wants them to do something and still find themselves out of the will of God. Christians are encouraged to seek out God’s will. Their pastors preach on the importance of being in the “center” of God will; in running the race as a horse with blinkers on, focused on exactly what it is God wants you to do.  However, when congregants put their pastor’s preaching into practice, they often find themselves at odds with their pastor, elder board, or other church power structures. You see, the men running the show only want you following the will of God if it lines up with their purpose, plan, and agenda for the church. Worse yet, in Evangelical churches that have strict disciplinary practices, following what you believe is the will of God can get you kicked out of the church. Let me illustrate this point. Years ago, I met a single woman at a meeting I was preaching at a Reformed Baptist church in Findlay, Ohio. She had moved to Findlay from the east coast. She told me a heartbreaking story of her believing it was God’s will for her to move to Ohio and her pastor and elder board disagreeing with her. Her being single meant that she had no man to rule over her, so they expected her to submit their authority. After numerous meetings on the matter, she decided to follow her bliss and move. The church leaders punished the woman by excommunicating her.

I was an Evangelical pastor for twenty-five years. I watched scores of congregants follow the aforementioned process for making decisions. I have watched countless church members make harmful decisions, believing that it was God green-lighting them. I can say the same for some of the decisions I made. I was oh-so-certain that the Captain of my Salvation was leading the way, yet in hindsight it was clear that my decision-making process was flawed or based on wrong or incomplete information. I can confidently say that there are several churches I never should have pastored, yet, at the time, I sincerely believed God wanted me to do so. And therein is the crucial point I want readers to see; that Evangelicals, much like their counterparts in the real world, make decisions based on feelings. If it feels right do it, the old mantra goes. We humans do what we do because we can. We may weigh the pros and cons of a matter, but when it comes right down to it, we choose to do what we want. Evangelicals may think that God is “leading them,” but the fact of the matter is that the only things leading any of us are wants, needs, and desires. In the end, we do what we want to do. We may seek out the counsel of others — certainly a wise idea — but once the opinion of others has been registered, we do what we think is best for ourselves at the time.

I am sixty-one years old. I have made a lot of decisions with and without God — not that there is any difference since there is no God. Many of my decisions have worked out as planned, but others haven’t. I have, over the years, made some horrid, wrong-headed choices. All I can do is learn from my mistakes, and hopefully not repeat them. I am sure the same can be said for all of us. Live long enough and you will have regrets.

Tagged Evangelicalism, Putting Out a Fleece, Making Decisions, Casting Lots, Will of God, Discerning the Will of God