Christians Say the Darnedest Things: Your Place is in the Kitchen, Wives 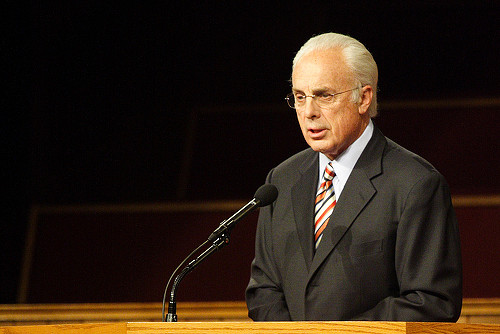 And then, number five, and now we get down to the nitty-gritty. They [wives] are to be workers at home. We’ve dealt with the attitudes of a woman, love toward husband, love toward children, wisdom and purity. Now, we turn to the very important issue, the sphere of her responsibility, workers at home, oikourgos, literally a house worker. This is the sphere of a woman’s life. It is her domain. It is her kingdom. It is her realm.

The word is derived from the word “house” and the word “work.” A house worker. It doesn’t simply refer, by the way, to scrubbing floors and cleaning bathrooms and doing that. It simply connotes the idea that the home is the sphere of her labors, whatever they might be. It is not that a woman is to keep busy all the time at home. It doesn’t mean that she can never go out the door. It doesn’t mean that she’s always to be doing menial tasks. But what it does mean is that the home is the sphere of her divine assignment.

She is to be the home keeper, to take care of her husband, to provide for him and for the children, all that they need as they live in that home. Materially, she is to take the resources the husband brings home and translate them into a comfortable and blessed life for her children. She is to take the spiritual things that she knows and learns and to pass them on to her children. She is a keeper at home.

God’s standard is for the wife and mother to work inside the home and not outside. For a mother to get a job outside the home in order to send her children even to a Christian school is to misunderstand her husband’s role as a provider, as well as her own duty to the family. The good training her children receive in the Christian school may be counteracted by her lack of full commitment to the biblical standards for motherhood.

In addition to having less time to work at home and teach and care for her children, a wife working outside the home often has a boss to whom she is responsible for pleasing in the way she dresses and a lot of other matters, complicating the headship of her husband and compromising her own testimony. She is forced to submit to men other than her own husband, likely to become more independent, including financially in fragmenting the unity of the family. She is in the danger of becoming enamored by the business world or whatever world she’s in, and finding less and less satisfaction in her home responsibilities.

Now, when children are grown, there is an opportunity for some kind of endeavor outside the home. Certainly, that option is viable, if it doesn’t compromise her as a woman, it doesn’t compromise the headship of her husband, it doesn’t put her under undue temptation, it doesn’t put her in an environment where she is going to be subject to the actions and the words of ungodly men. It may be that when the children are grown she can work part-time; she can even work full-time in an environment which is salutatory to her and which increases her godliness and strengthens her as a wife.