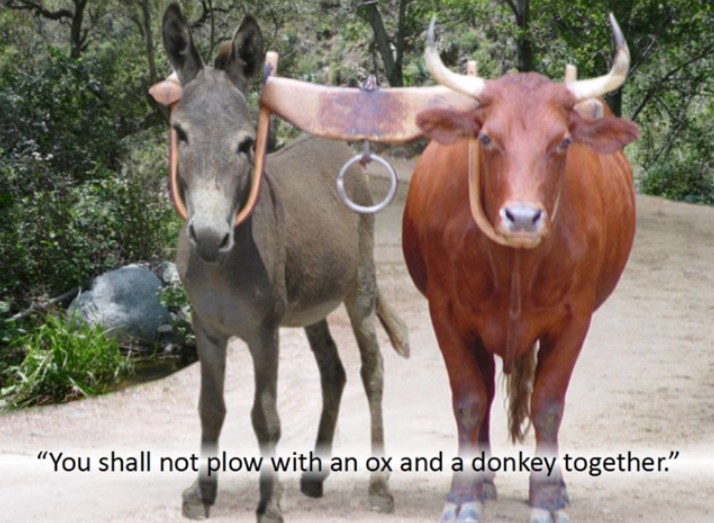 Be ye not unequally yoked together with unbelievers: for what fellowship hath righteousness with unrighteousness? and what communion hath light with darkness?  2 Corinthians 6:14

During my years as an Evangelical Christian, I heard many sermons warning Christians not to be “unequally yoked” with unbelievers with regard to marriage, friendship, or owning a business together. The illustration was always of two animals that were not similar in size or strength being yoked together to pull something heavy. A picture was always painted of two animals walking in circles or the transport going awry in some way.

As teenagers and young adults, we were warned to never date unbelievers because that would lead to disastrous outcomes. Our pastors and teachers would give anecdotal examples of Christians marrying a non-Christians in which the Christians were bullied or convinced to give up their principles. Often the non-believers in these stories would mistreat the believers and lead them down roads of debauchery. Or the non-believers would lead the believers away from Christ, only to abandon the believers, leaving the believers’ lives in shambles (for Jesus and the church to swoop in to rescue and rehabilitate them). The pictures painted were quite bleak. The reasoning behind this advice was that a Christian and a non-Christian supposedly have completely different worldviews and sets of values guiding their choices.

I met the man who became my husband through some friends. My close college friend was dating a guy who was the fraternity brother of my husband. In the early 1990s at our university, it was still customary for fraternity brothers to dress up in a suit jacket, khakis, a button-down shirt, and a tie to attend football games. Female students would dress up as well, typically in a nice dress (usually black) with nice shoes and jewelry. A fraternity brother would ask a female student to be his date to the game, meaning that they would meet at the fraternity house for cocktails, go to the game for a while, then return to the fraternity house for more cocktails. Later in the evening, after everyone had changed clothes, there would be a party at the fraternity house, typically with a live band. It was the South, after all, where traditions died hard. However, it was a lot of fun. (Our daughter attends our alma mater, and apparently the formal dress and the game date part has changed, but the pregame cocktails and postgame activities remain the same.) My fraternity friend set me up with his dateless fraternity brother for a football game. I figured that I wouldn’t have to actually spend much time with the guy; that we would both just hang out with our respective friends with the respectability of having a date to go to the game remaining intact. Instead, we hit it off and ended up dating. The rest, shall we say, is history.

When we met, I was in the process of leaving Evangelical Christianity, but as deconverts know, many deeply-held ideas are difficult to shake. My husband was a nominal Catholic, meaning that his family attended mass on Christmas and Easter, along with the occasional wedding or funeral. When we met, he said he was Christian and seemed confused when I asked him “what kind?” He seemed to think “Christian” covered everything. Au contraire, mon ami! I explained to him that there were many different denominations of Christian, each with its own doctrines and practices. As we became more and more serious, I knew that we were an “unequally yoked” couple. He would alternately refer to himself as “Christian” or “agnostic”, but he respected all beliefs or lack of belief. He had a strong set of values, stronger than those of many Christians I had encountered, so I knew he wasn’t a bad person. I knew he wasn’t “saved,” but I was having doubts about the necessity of Evangelical salvation, so I let that go. We got engaged, and while the concept of being unequally yoked nagged at me a bit, I continued to push those thoughts away. I had no intention of converting him to Evangelical Christianity; first, because I was having doubts myself, and second, because I realized it would sound ridiculous to an outsider.

Oddly enough, my family barely questioned my husband’s Christian beliefs. They knew that he had been raised Catholic, but they really didn’t ask us many religious questions. I don’t know if it was because they trusted me to vet a marriage partner or if they were afraid to have an argument with me. Many of my family members are afraid of me for some reason (probably because I am not afraid to speak my mind and to disagree with their ideas). In any case, we were married in our university chapel by a Methodist campus minister. We had our wedding reception, complete with a full bar and a DJ, at the fraternity house. I warned my Southern Baptist grandma before the wedding that we would be serving alcohol and having dancing at the reception, and she told me that it was between me and my husband and that she would stay for a little while. Grandma was a complementarian, after all. After dinner was served, my uncle drove my grandma home while the rest of us partied.

During our early years of marriage, we tried a variety of churches including Catholic, for a while. We ended up at a Congregational United Church of Christ for a few years while our children were little. It was an open and affirming church, with a husband and wife team of pastors. I became a deacon and joined the choir while my husband joined the finance committee. After a few years, each of us had our deconversion experiences for different reasons. He openly called himself an agnostic and then an atheist, while I spent several years saying I was “taking a break from religion” while I sorted out the details. Our children were so young that they do not remember much about our church-going years, and both consider themselves to be nonreligious and will occasionally use the term “atheist” to describe themselves, depending on the company present.

We are equally yoked atheists at this time. Because I was raised in such a hardcore Evangelical environment, I am more anti-fundamentalist than my husband is. He considers most religion to be benign, a way to teach people love and morals and to give comfort during times of suffering or heartache. I witnessed and was a part of the ugly side of Fundamentalist Christianity. I did not talk about it for many years, mainly because the memories were often painful and my embarrassment regarding the anti-intellectualism was too intense. As my daughter began exploring universities in the Bible Belt, I started talking with my family about my experiences so that they could understand the Bible Belt culture. I wanted them to understand a bit more about why mom reads books about evolution, about the history and archaeology of the Bible, about deconversion experiences, and about atheism. Each of my personal stories is met with looks of “WTF”. They are even more stunned to hear that many of our family members still believe these things.

I suppose an Evangelical pastor could use my story as a sermon illustration of why unequal yoking is detrimental to one’s “Walk With The Lord.” While I did not enter a life of total debauchery or divorce, I did deconvert from Christianity. I am an apostate. Though the pastors of my background (and some of my relatives and friends from my past) would consider me in the “once saved always saved” crowd, I am well outside the world of the True Christian®, and in their estimation I have led my husband and children to the eternal fires of Hell. In my estimation, for one to remain in Evangelicalism with beliefs at odds with the findings of history, archaeology, and science, it is vitally necessary to insulate oneself (and one’s family) from outside influences that reveal the tenuous nature of religious doctrines. Therefore, it makes sense that Fundamentalist leaders would urge their flocks to avoid becoming entangled with nonbelievers or to attend secular educational institutions.

Do you have a story regarding the concept of being unequally yoked, either your own experience or the experience of someone you know? If you were or are part of an unequally yoked pair, did you experience any trepidation? Please share your story in the comment section.