“But He’s a Good Person” 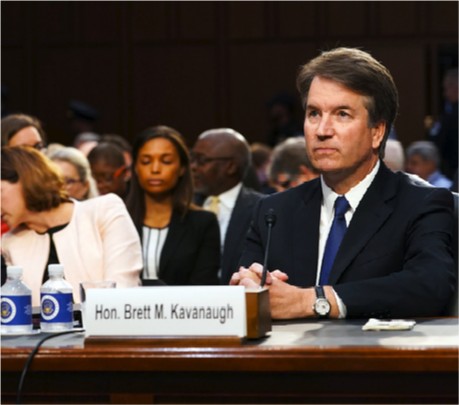 During his Senate confirmation hearings, Brett Kavanaugh testified about the good and great things he’s done throughout his life: He has “mentored” many female students; 21 of the 25 clerks he hired while a US attorney were women. Why, he even coaches his daughters’ basketball team!

I have no reason to doubt that he has done whatever he can to offer women opportunities in the law, politics, academia and other areas. I also am willing to believe him when he says he is committed to equality or even when he says he’s tried to live an “exemplary” life.

I would also believe such statements from any number of other men. Moreover, I have known many other men who, throughout their lives, gave of their time and resources to help women, as well as men and children, in any number of ways. In fact, I know of one in particular who gave over his life to helping and guiding other people.

He was a priest in the parish where I grew up. Nearly everyone sang his praises: He was a fixture, not only in the parish, but in the community as a whole.

It seems that at that time, a priest stayed in a parish longer than he stays now: Some priests spent most or all of their careers in the same place, hearing the first confessions, offering the First Holy Communion and confirming young parishioners — and their children — and grandchildren. You would also see them on playgrounds, in nursing homes or walking the streets of the neighborhood. They visited the old and sick, sometimes giving of their meager means to help.

Also, in neighborhoods like the one in which I spent my childhood, priests were the de facto therapists and social workers. Most of the men were blue-collar workers and the women homemakers; many were immigrants and few had more than a high-school education. That meant they couldn’t afford, or didn’t know how to access, therapists, and even if they could or did, they never would trust them, or for that matter, social workers, in the same way they would confide in a priest.

The particular priest I’m thinking of right now did such things, and more.

And he sexually molested me.

Now, anyone who doesn’t know that probably knows only what a “good and Godly” man he was to them. Were I to tell them, then or now, what Father did to me, it probably wouldn’t change their perceptions of him. In fact, some would turn on me — or, for that matter, anyone else who might say that he did to them what he did to me.

(I, of course, have no way of knowing whether he abused any other kids — or assaulted any adults. But, given what we’ve seen, it isn’t hard to imagine, for me anyway, that he did: Sexual predators rarely, if ever, prey on only one person.)

So, even though I thoroughly sympathize with — and believe — Christine Blasey Ford, I understand why other women signed a letter of support for Judge Kavanaugh. Most were his high school friends or classmates and said, in essence, that the young man they knew “would never do anything like that.”

That is how most sexual predators are able to go undetected for decades.  If someone treats you well, you are less likely to think he or she is capable of harming another human being. That is especially true if that someone has some sort of standing in the community — whether through family or professional connections, academic or professional accomplishments or as a spiritual leader.

Brett Kavanaugh may well have been someone who “has always treated women with decency and respect,” as the letter relates. He may also be the rigorous scholar, conscientious teacher, caring mentor, impartial jurist, loving father — and champion of women’s equality – that he proclaimed himself to be.

That is, he might be all of those things — to people not named Christine Blasey Ford. Or Deborah Ramirez. Just as the priest in my parish was a godly, saintly man to many people in my community — but not to me. Or, perhaps to some other kids or, for that matter, adults who have not yet spoken up.

It’s difficult to understand the complexities of the human mind – what makes people “tick,” what goes on inside them. As a result, none of us ever knows what evil lurks in the depths of those we think we know – even those who are “good people.”