Christians Say the Darnedest Things: Why Jerry Falwell, Jr. Has an Ongoing Bromance with Donald Trump 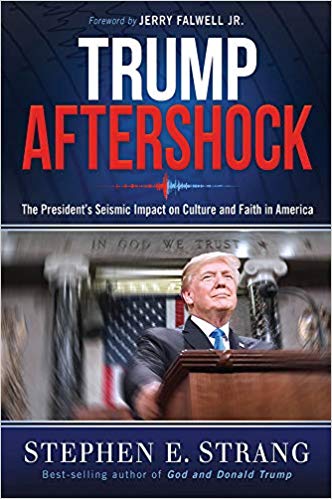 For over two years now people have been asking me why I supported Donald Trump as a candidate for president of the United States and why I continue to support him now in his role as the chief executive of our great nation. After all, I was one of the only people from the evangelical camp who endorsed Mr. Trump even before the Iowa caucuses. I determined early on that what ailed the United States would require more than a PR and policy bandage. And if Trump were to get elected, he would need more than bandwagon support.

But to answer the question about my support, much of my motivation came from my background in business. My father came from a family of businesspeople who were not Christians, including my grandfather. But a series of personal tragedies resulted in his early death at the age of 55. My dad was only 15 at the time, and he became a Christian because of those sorrowful events. I think he might have gone into the family business if those things hadn’t happened. The point is that though the world knows the Falwell name chiefly in the context of my famous clergyman father, most Falwells have been successful entrepreneurs—businessmen and businesswomen.

Even in the context of a nonprofit organization such as Liberty University, I have seen firsthand what applying business principles can do to save an organization. In the late 1980s and 1990s, when donations dried up, we had to create a business model that would keep Liberty alive. In the end not only did we eliminate the debt; we also prospered enough that we’ve now fulfilled many of the original visions my father had for this university. But Liberty’s success didn’t come through hazy or lazy leadership.

So that’s why I supported Donald Trump early, because the United States is drowning in $21 trillion of debt. Trump is a businessman. We haven’t had many businessmen who have become president. Instead, we get career politicians who are short on transformative thinking and long on political career preservation. Even though Trump hadn’t even decided what all his political views were at that time, I knew that a pragmatic businessman with common sense would come down on the right side of issues. Trump wanted to do what was best for the country. And if you start with that desire—to do what’s best for the country and for the common man—then you have no choice but to be a conservative. It’s that simple.

I’m proud I supported Donald Trump. And since he’s entered the White House, I’ve stayed in close touch with him, talking to him about once a month. It has become a close friendship. I’m so pleased with how he’s kept his promises. He’s appointed justices to the lower courts and the Supreme Court who I believe will uphold the Constitution. On matters related to religious liberty, the president has been a godsend. And his deregulation strategies have brought about prosperity for businesses and the American worker. He’s done all the things he said he was going to do—even with all the attempts to thwart his administration by fake Republicans in the Senate and all the folks on the left who will stop at nothing to overthrow a duly elected president.

You see, we needed somebody with resolve and backbone. Republicans and Democrats—the parties had become so much alike that you really couldn’t tell the difference. Many of them were—and still are—so scared of their shadow and criticism from the press that they waffle on every issue. They put their finger up and see which way the wind is blowing.

But Trump just marches ahead. He doesn’t care how much criticism comes his way. And the people don’t care either. The people don’t care what the press say anymore because they’ve lost all credibility. That’s what Americans have longed to see in their president—somebody who will stand up for the country, stand up for what’s right and not back down in the face of adversity.

Like Stephen Strang does in this book, I compare Trump to Winston Churchill during World War II. Everything looked lost in the face of the onslaught of Hitler’s military might. Churchill had to resolve to move ahead anyhow and to never quit. That’s what I see in Donald Trump, and I think that’s why people support him in spite of all the negatives that get thrown at him.

In this new book by my friend Stephen Strang, you will come to a great understanding of all that has been happening since election night. Strang shows how President Trump has exceeded the expectations of his supporters. And Strang reveals how the left, instead of acknowledging the genuine successes of the Trump administration, are growing in their animus toward the president. Refusing to acknowledge the roaring economy and a renewed sense of optimism and national pride, some on the left (and some on the right) are succumbing to “Trump Derangement Syndrome.” And so the rift between the left and the right has grown deep, and our national politics are more polarized than ever.

But Strang’s book strikes a chord of hopefulness because he believes (as do I) that these days are some of the most extraordinary times in the life of our nation. You’ll enjoy Trump Aftershock. But even more, it will prompt you to pray and work in your own community to “make America great again.”

You can buy Trump Aftershock here. I am sure regular readers of this blog will want to run out and buy themselves a copy. That’s sarcasm, by the way.