Taking Back America For God: How Evangelical Christians View the World 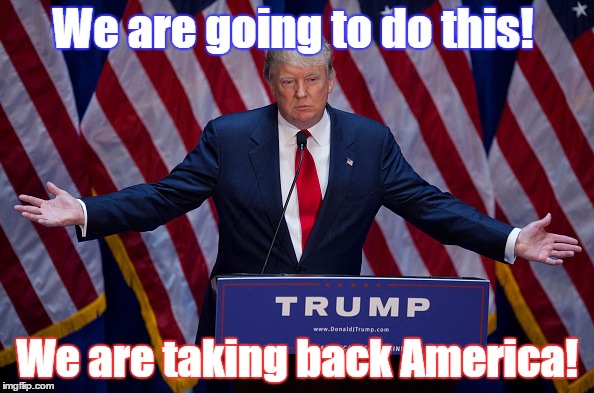 What follows are the lyrics for the Southern Gospel song, We Want America Back. Written by Fundamentalist Christian Jeff Steele, this song succinctly reveals how Evangelicals view the world. It’s scary to think that anyone thinks this way, let alone tens of millions of Americans. Jeff Steele is a member of The Steeles.

Narrative to be used (before singing Stanza 2):

I love America. But I do not love what she has become.
Scripture has said, Blessed is a Nation whose God is the Lord,
and America has forgotten the Godly foundation upon which she was built… Something is wrong
Our children are asked to attend public schools that in many cases resemble war zones,
without even the most basic right of any soldier… the right to pray to the God of heaven.
Many times a wild-eyed, drug-addicted, gun-carrying teenager is allowed to stay in school,
while our Supreme Court decided to expel God from the classroom over thirty years ago.
Something is wrong. Television daily bombards the senses of our nation with the idea that wrong is right,
that the abnormal is normal, that the abhorrent is acceptable, and that what God calls an abomination is
nothing more than an alternate lifestyle. And it’s had an effect. Thirty years ago, the number one television
program in America was “The Andy Griffith Show.” Look what we have today. Something is wrong.
When our government can pass out contraceptives to children is school without parental consent,
and yet the Gideons can no longer pass out the Bible on campus . . . something is wrong.
When our leaders can tell your children and mine that premarital sex is alright as long as it’s safe. . . yes . . .
something is wrong. And I for one am ready for a change. I will say to my government, “I’m not raising
dogs at my house; I’m raising children . . . created in the image and likeness of almighty God.
And I’m going to teach them the Bible. If the Bible says it’s right . . . it’s right.And if the Bible says it’s wrong . . . it’s wrong.”
The only hope that America has is that Godly men and women of character
will stand together as one might army and declare to the immoral, the impure, the obscene and the foul,
“Your days of unlimited access the minds of America are over.
The army of God, that has been silent for too long, is taking America back!”

Here is a video of this song. It is being sung by Barbara Fairchild and her husband Roy Morris at a 2012 Patriotic Rally. Please take the time to view the video. Listen carefully to the ad libs that are added to the spoken part of the song. Still think religious beliefs are harmless?