Quote of the Day: “The Family” 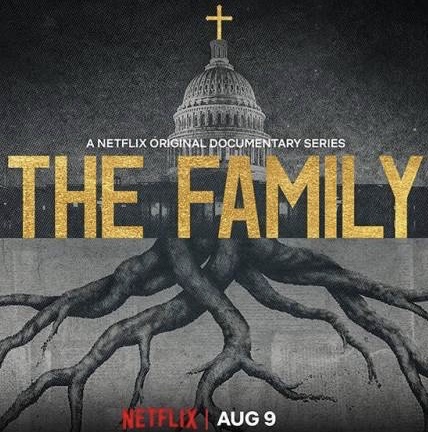 A secretive organization that has courted political leaders and built international influence while undermining the constitutional division of the church and the state in the process is at the center of a new five-episode documentary series called “The Family.”

Since 1953, the National Prayer Breakfast has remained a fixture in American politics that has boasted attendance by every president since Dwight D. Eisenhower on the first Thursday of every February. It has been hyped as an opportunity for the political elite of Washington, D.C., and visiting international dignitaries to put aside partisan differences and reflect on a higher purpose.

While the annual event is purportedly hosted by members of Congress, it is actually organized and run by an evangelical Christian organization called The Fellowship Foundation, or “The Family,” as it is referred to internally by its members.

The series, which debuts on Netflix on Friday, takes a look at the group that operates with its own higher purpose — quietly building its influence on global politics “in the name of Jesus.”

“The Fellowship isn’t about faith and it spreads very little. It’s about power,” said Jeff Sharlet, whose books, “The Family: The Secret Fundamentalism at the Heart of American Power,” and “C Street: The Fundamentalist Threat to American Democracy,” inspired the Netflix series.

“Internally, it is spoken of primarily as a ‘recruiting device’ with which to draw ‘key men’ into smaller prayer cells to ‘meet Jesus man to man,’” according to Sharlet. “Practically, the Prayer Breakfast has functioned from the very beginning as an unregistered lobbying festival.”

Citing 2006 documents, Sharlet estimates the number of dedicated organizers who handle recruitment at just 350. Those organizers, however, have built a network of prayer cells that the late Christian Right leader Chuck Colson pegged at 20,000-strong, calling it, “a veritable underground of Christ’s men all through government.”

Sometimes that has meant aligning with politicians who stray from Jesus’ example. In 2009, former South Carolina Gov. Mark Sanford gave a press conference outside of C Street emphasizing his religious pedigree upon resurfacing after disappearing from his state for days to visit a mistress in Argentina.

So, while President Donald Trump may not have the most pious of track records, Sharlet says the Family has embraced the unique opportunity provided by the most fundamentalist Cabinet in recent American history to advocate evangelical policy.

“The Fellowship believes God uses who He wants, and that power itself is an indicator of who He has chosen — it’s a theology of more power for the powerful,” Sharlet explained.

“The fact that Trump, with his “art of the deal,” is especially well-prepared to embrace this transactional theology — Trump puts the Christian Right’s people in power in return of their support — seals the deal.”

The Family: The Secret Fundamentalism at the Heart of American Power