Quote of the Day: Americans Increasingly Indifferent Towards Christianity 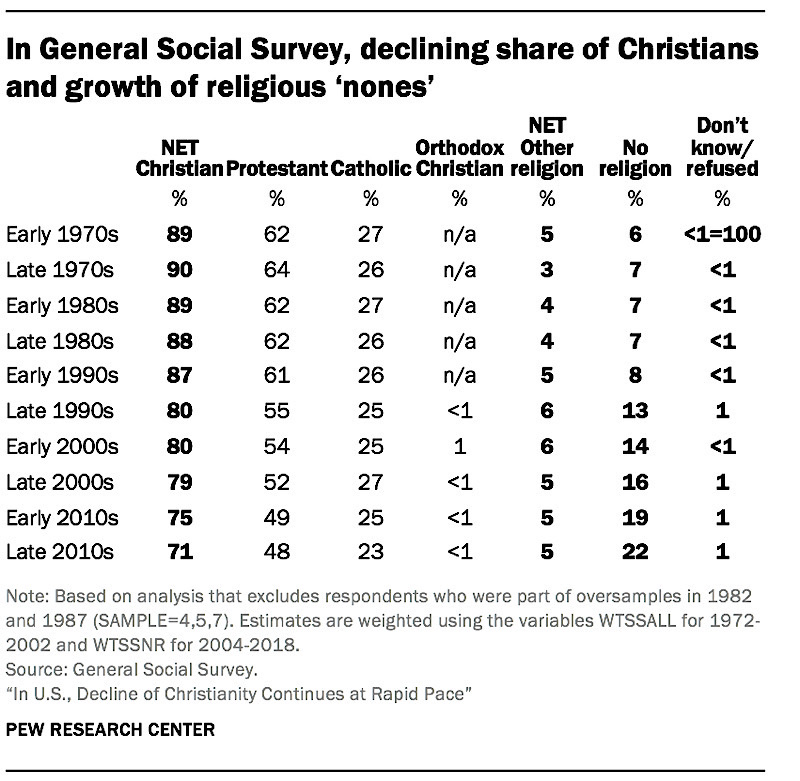 The United States is becoming a less Christian country, and the decline in religious affiliation is particularly rapid among younger Americans, new figures show.

The proportion of US adults who describe themselves as Christian has fallen to two-thirds, a drop of 12 percentage points over the past decade, according to data from the Pew Research Center.

Over the same period, the proportion of those describing themselves as atheist, agnostic or “nothing in particular” has risen by 17 percentage points to more than a quarter of the adult population.

Although churches and faith movements continue to exert strong political influence on the Trump administration and at the state level, the proportion of American adults attending religious services has declined.

The proportion of US adults who are white born-again or evangelical Protestants – the religious group which strives hardest to see its political agenda adopted – is now 16%, down from 19% a decade ago.

The number going to church at least once or twice a month has fallen by seven percentage points over the past decade. More Americans now say they attend religious services a few times a year or less (54%) than say they attend at least monthly (45%).

The fall in religious identification and activity has affected both Protestant and Roman Catholic churches. According to Pew, 43% of adults identify with Protestantism, down from 51% in 2009. And 20% are Catholic, down from 23% in 2009.

Fewer than half of millennials (49%) describe themselves as Christians; four in 10 are religious “nones”, and 9% identify with non-Christian faiths.

As many millennials say they never attend religious services (22%) as those who say they go at least once a week.

Pew’s report, released on Thursday, says the decline of Christian communities is continuing at a rapid pace.

Religious ‘nones’ have grown across multiple demographic groups: white people, black people and Hispanics; men and women; all regions of the country; and among college graduates and those with lower levels of educational attainment.

“Religious ‘nones’ are growing faster among Democrats than Republicans, though their ranks are swelling in both partisan coalitions. And although the religiously unaffiliated are on the rise among younger people and most groups of older adults, their growth is most pronounced among young adults,” the report said.

— The Guardian, Americans Becoming Less Christian as Over a Quarter Follow no Religion, October 17, 2019