Living in a World Where Facts Don’t Matter 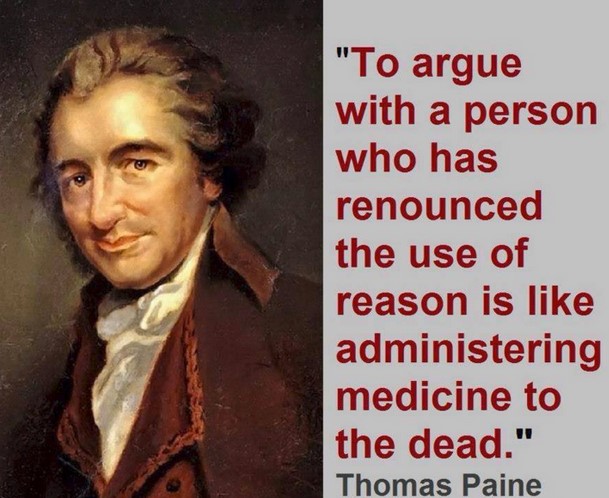 People who believe science is the best way we have to explain the world we live in and who believe facts matter find themselves under increasing assault by people who refuse to accept things as they are. I am all for vigorous debate and disagreement, but there comes a time when what matters is facts. Recently, a family member — who happens to be a Trump-supporting Evangelical pastor — posted a quote allegedly by Alexandria Ocasio-Cortez on social media. Generally, I avoid discussing politics and religion on my personal Facebook account. Want to discuss such things with me? Go to my Facebook page or my blog. My personal Facebook account is reserved for photographs, family stuff, silly memes, and cat videos.

For whatever reason — boredom, perhaps? — I decided to respond to the Ocasio-Cortez quote. The quote seemed out of character for Ocasio-Cortez, so I went to Snopes to check it out. Sure enough, the quote was false. After determining the quote’s truthfulness, I left the following comment: thou shalt not bear false witness. This got me excommunicated; not unfriended, just blocked from seeing the man’s posts. I don’t play that game, so I unfriended him. I then let him know that I did so, and why.

The false quote perfectly fits this man’s worldview; his view of secularism, liberalism, socialism, and Democrats. In his mind, it must be true because it reinforces his sincerely-held political beliefs. I suspect many readers could tell similar stories; times when they challenged religious or political statements with facts. I have repeatedly responded to false claims on Facebook from friends and family members by commenting with a link to the relevant Snopes article. I have yet to have someone say to me, thanks for pointing out my error. I made a mistake. All I get is silence, and the false quote or meme continues to live on in infamy.

In 2017, Dr. R. Kelly Garrett wrote an article titled, Facts don’t matter to Americans, and we should be worried.

Have you ever thought to yourself, “I’ll bet that’s true,” before you had all the facts? Most people probably have at some point.

Where people differ is in how often they do so. A 2016 survey that my colleague Brian Weeks and I conducted found that 50.3 percent of all Americans agreed with the statement “I trust my gut to tell me what’s true and what’s not.” Some of those polled felt quite strongly about it: About one in seven (14.6 percent) strongly agreed, while one in 10 (10.2 percent) strongly disagreed.

In other words, there’s a lot of variation in how Americans decide what to believe.

In a recent paper, we were able to use the findings from this survey and two others to dig into the different approaches people take when deciding what’s true.

What we learned offers some hope for people’s ability to tell truth from fiction, despite the fact that so many trust their gut.

Many incorrect beliefs have political foundations. They promote a policy, an ideology or one candidate over another.

People are susceptible to political misinformation because they tend to believe things that favor their side — even if it isn’t grounded in data or science. There are numerous factors at play, from the influence of nonconscious emotions to the need to defend a group that the individual identifies with.

For these reasons, millions of Americans believe things that aren’t true.

With all the talk about political bias, it’s easy to lose track of the fact that politics aren’t the only thing shaping people’s beliefs. Other factors play a role too.

For example, people are more likely to believe something the more often they’ve heard it said — commonly known as the illusory truth effect. And adding a picture can change how believable a message is, sometimes making it more convincing, while at other times increasing skepticism.

Our study focuses on something else that shapes beliefs: We looked at what matters the most to people when they’re deciding what’s true.

We found that having faith in your intuition about the facts does make you more likely to endorse conspiracy theories. However, it doesn’t really influence your beliefs about science, such as vaccine safety or climate change.

In contrast, someone who says beliefs must be supported with data is more likely both to reject conspiracy theories and to answer questions about mainstream science and political issues more accurately.

The risk of relying on one’s intuition may be self-evident, but its role in belief formation is more nuanced.

In the end, knowing how much someone trusts his or her intuition actually tells you very little about how much proof that person will need before he or she will believe a claim. Our research shows that using intuition is not the opposite of checking the evidence: Some people trust their instincts while at the same time valuing evidence; others deny the importance of both; and so forth.

The key is that some people — even if they usually trust their gut — will check their hunches to make sure they’re right. Their willingness to do some follow-up work may explain why their beliefs tend to be more accurate.

In this context, our results are surprising. There are many individual qualities that seem like they should promote accuracy, but don’t.

Valuing evidence, however, appears to be an exception. The bigger the role evidence plays in shaping a person’s beliefs, the more accurate that person tends to be.

We aren’t the only ones who have observed a pattern like this. Another recent study shows that people who exhibit higher scientific curiosity also tend to adopt more accurate beliefs about politically charged science topics, such as fracking and global warming.

There’s more we need to understand. It isn’t yet clear why curiosity and attention to the evidence leads to better outcomes, while being knowledgeable and thinking carefully promote bias. Until we sort this out, it’s hard to know exactly what kinds of media literacy skills will help the most.

But in today’s media environment — where news consumers are subjected to a barrage of opinions, data and misinformation — gut feelings and people’s need for evidence to back those hunches up can play a big role. They might determine whether you fall for a hoax posted on the Onion, help spread Russian disinformation or believe that the British spy agency MI6 was responsible for Princess Diana’s death.

For now, though, when it comes to fighting the scourge of misinformation, there’s a simple strategy that everyone can use. If you are someone who consistently checks your intuition about what is true against the evidence, you are less likely to be misled. It may seem like common sense, but learning to dig into the story behind that shocking headline can help you avoid spreading falsehoods.

Several days ago, a Christian man named Bill Wood stopped by this site to wow me with his intellectual prowess. Wood posted verbose comments meant to “educate” me about Biblical and scientific truth. You can read his comments here. Wood demanded I explain to his satisfaction my deconversion. I pointed him to the WHY page. Not good enough for Wood. He doubled and tripled down, refusing to accept any “truth” but his own. Wood is a classic reminder of why I don’t get into discussions with Evangelicals. Their minds are made up as to what the “truth” is. Wood believes the Bible is God’s inspired, inerrant, infallible Word. I asked him if he had read any of Bart Ehrman’s books, knowing that the answer was likely a big, fat, emphatic NO! Sure enough, all I got was another lengthy sermon. You see, for the Bill Woods of the world, their minds are closed to anything that challenges their worldview. They have decided this or that is “truth,” end of discussion. Their “gut” (often called the Holy Spirit) tells them that whatever they believe about God, Jesus, religion, science, etc. is true. In Bill Wood’s mind, creationism trumps science; theological dogma trumps archeological, geological, and sociological facts. All the facts in the world won’t change his mind.

We now live in a post-facts world. Instead of chasing truth wherever it leads, people scour the Internet looking for websites, blogs, memes, and social media posts that reinforce their beliefs. In 2016, eighty-one percent of voting white Evangelicals voted for Donald Trump. Three years later, a majority of Evangelicals still support the President, despite his having told over 15,000 public lies. On January 23, 2016, then-candidate Donald Trump said:

I could stand in the middle of Fifth Avenue and shoot somebody and I wouldn’t lose any voters, okay? It’s, like, incredible.

Fast forward to today. Does anyone doubt that what Trump said is the truth; that no matter what he says or does, a sizeable percentage of Americans will resolutely support him. To these people, facts don’t matter. As long as their beliefs and worldview are confirmed, Trump is free to run roughshod over our Republic. As long as Trump says he is anti-abortion, anti-transgender, anti-immigration, anti-welfare, anti-socialism, anti-atheism, anti-anything enacted by Obama, white Evangelicals, conservative Catholics, and Mormons will continue to vote for him. Racists and white supremacists know that Trump is their best chance for a whiter America. No matter what the “facts” are, an overwhelming majority of Republicans and libertarians move in lock-step fashion with the President.

What are people who value facts supposed to do? If a large number of Americans are impervious to the truth, what hope is there for this great nation of ours? I know that this post will do nothing to change hearts and minds. People who agree with me will shout “right-on, brother!” Those who don’t will just see me as yet another liberal, commie, socialist out to destroy white Christian America.

We truly live in perplexing times. I have no confidence in things becoming better any time soon. I shudder to think what four more years of Donald Trump will bring us. Imagine what would happen if Republicans somehow took control of Congress? We are fools if we think the United States is invulnerable to decline and collapse. History tells us about many great civilizations who have come and gone. We are not immune to a similar fate.

What do you think people who value facts and truth should do? Please share your thoughts in the comment section.