Bruce, What if Christianity is True? 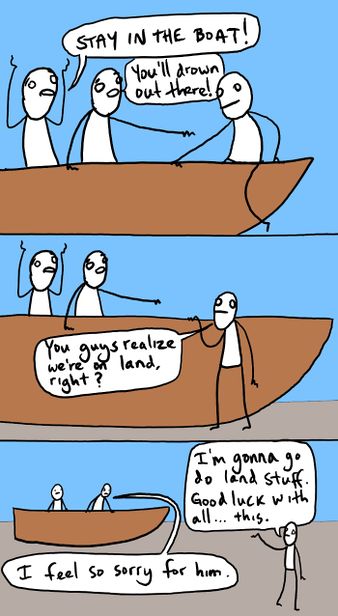 “It’s just the ocean playing tricks on us. Just because it looks like we’re on land, and it doesn’t seem like we’re moving, doesn’t mean we should risk getting out.” “Our ancestors wouldn’t have sacrificed so much to stay in the boat if it wasn’t really on the water. And I wouldn’t feel such a dark, frightened feeling every time my doubts say we’ve been fooled.” “Absolutely. There’s no other explanation for it.” Source

Countless, Evangelicals have asked me, “Bruce, what if Christianity is true?” Usually, this question is couched in the use of Pascal’s Wager. For those of you unfamiliar with Pascal’s Wager, the RationalWiki explains it this way:

“”Pascal’s wager: Believing in and searching for kryptonite — on the off chance that Superman exists and wants to kill you.

Pascal’s wager is an argument that asserts that one should believe in God, even if God’s existence cannot be proved or disproved through reason.

Blaise Pascal’s original wager was as a fairly short paragraph in Pensées amongst several other notes that could be considered “wagers”. Its argument is rooted in what has subsequently become known as game theory. The wager argues that the best course of action is to believe in God regardless of any lack of evidence, because that option gives the biggest potential gains. Pascal’s original text is long-winded and written in somewhat convoluted philosophy-speak, but it can be distilled more simply:

Pascal’s wager makes a number of assumptions about reality, and a number of theological assumptions about the god it argues for. If any of these can be shown to either be false or undesirable, then the power of the Wager for determining one’s actions and beliefs is severely weakened — indeed, the argument of the Wager can be reversed in some cases and it can argue for non-belief. These mostly stem from the theological implications of applying the Wager to belief in God, rather than the game theory attributes and decision-making process presented.

People asking me this question genuinely fear what will happen to me if Christianity is true. Well, actually, their version of Christianity, anyway. I have yet to have a progressive or liberal Christian try Pascal’s Wager on me. Either out of not wanting to be impolite or believing in some form of universal salvation, liberals and progressives don’t try to evangelize me. All praise be to Loki for such grace and mercy. Evangelicals, on the other hand, adhere to an exclusionary, separatist version of Christianity. For them, it is all about right beliefs, who is in and who is out. Matters of salvation and eternal destiny are elevated to matters of life and death. If God is who Evangelicals say he is, and judgment and eternal torture await all those who refuse to bow a knee and worship Jesus, then I can, on a theological and personal basis, understand why they might be worried about me. There are those Evangelicals who seem to relish and glory in my soon death and torture in Hell, but most Jesus-lovers are decent human beings who don’t want to people to suffer (though their overwhelming support for the vile, anti-human policies of Donald Trump is cause for me to reconsider my view of Evangelicals as a whole). Thus, the question, WHAT IF CHRISTIANITY IS TRUE?

Such questions are laden with presuppositions. The Bible is the inspired, inerrant, infallible Word of God. The God revealed in the Bible is the one true God. This true God reveals himself to everyone through creation and conscience, rendering every human who has ever walked on the face of the earth without excuse. That’s why Evangelicals say there’s no such thing as an atheist, or that atheists deliberately ignore the evidence for God out of some sort of secret desire to sin and live licentiously. No matter how many times atheists suggest otherwise, Evangelicals know better. Their presuppositions tell them so . . . end of discussion. This is why it almost always a waste of time to argue with Evangelicals who are psychologically tethered to these beliefs. Until they are willing to at least consider they could be wrong, there’s no way to reach them intellectually.

I get it. Fear of being wrong is a powerful motivator. So is fear of Hell and eternal damnation. Remove fear as a motivator, and I suspect many Evangelicals would be sleeping in on Sundays with the unwashed, uncircumcised Philistines of the world. But, as long you worried about what might happen if you believe the wrong things, go to the wrong church, or any of the other “important” matters they clench their sphincter muscles over, you are likely to, at least, do the things that make one a Jesus-loving, Bible-believing, Evangelical Christian. It was only when I no longer believed that the Bible was what Evangelicals claim it is that I was able to break free of a lifetime of Fundamentalist belief and practice. It was the Bible that had a magical, powerful hold on me. Once, however, that hold on me was broken, the jig was up. Once the Bible lost its authority over me, I was free to think and believe whatever I wanted. And, here I am today, an outspoken ex-Evangelical turned atheist; a former card-carrying right-wing extremist who is now a progressive and a liberal. Truly reason and intellectual inquiry have transformed me into a new person. As the good book says, “If any man be in reason, old things are passed away and all things become new.” Okay, the original text says, “if any man be in CHRIST,” not in “reason.” However, I did have a born-again experience of sorts when I deconverted. The difference, of course, is that I have not arrived. I have not bought fire insurance and punched my ticket for glory. I am just a man wandering on the path of reason, knowledge, and understanding. Released from fear of God, judgment, and eternal fire and brimstone, I am free to wander at will across this landscape we call life. This is called FREEDOM.

Bruce, you never did answer the question. “What if Christianity is true?” Fine, here’s my answer. I have weighed Christianity in the balances and found it wanting. I have concluded that the central claims of Christianity are not true. Jesus? A naturally-born Jewish rabbi who got himself killed 2,000 years ago because he ran afoul of Roman (and Jewish) law. Once dead, Jesus stayed that way. No resurrection for Jesus, nor for the rest of us either. But what about all Jesus’ miracles? Works of fiction. That’s what reason and common sense tell me. I refuse to let a largely irrelevant religious text cloud my view of life.

“But, Bruce, what if Christianity is true?”

Are you on Social Media?