The Myth of Persecution by Candida Moss, A Book Review 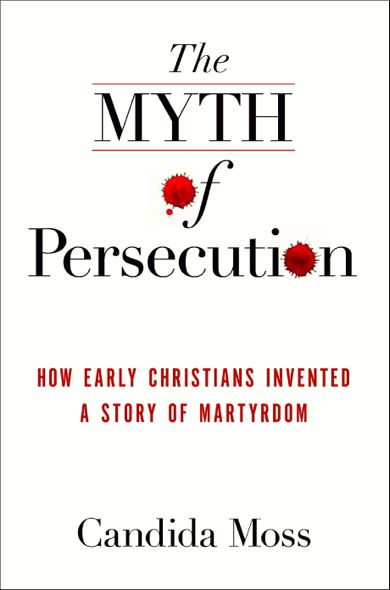 HarperOne, the publisher of The Myth of Persecution: How Early Christians Invented A Story of Martyrdom, sent me a review copy of the book.  The book is 260 pages long, 308 pages long including the chapter notes and index.

The author of the Myth of Persecution is Dr. Candida Moss, professor of New Testament and Early Christianity at the University of Notre Dame.  She is a graduate  of Oxford University and earned her doctorate from Yale University.

The Sunday school narrative of a church of martyrs, of Christians huddled in catacombs out of fear, meeting in secret to avoid arrest, and mercilessly thrown to lions for their religious beliefs is a macabre fairy tale. When Christians appeared in Roman courtrooms, they were not tried as heretics, blasphemers, or even fools. Christians had a reputation for being socially reclusive, refusing to join the military, and refusing to swear oaths. Once in the courtroom Christians said things that sounded like sedition. They were rude, subversive, and disrespectful. Most important, they were threatening. Even if the actions of the Romans still seem unjust, we must admit that they had reasons for treating Christians the way they did. The fact that religion and politics were so intimately blended with one another means that it is difficult to parse the motivations of Roman administrators as either religious or political. But from a Roman perspective and from the perspective of members of most ancient religious groups and political organizations, the Romans had the moral high ground. They were protecting the Empire from the wrath of the gods and its effects. That Christians were executed should not surprise us, this is a world in which people paid the “ultimate price” for seemingly small offenses.

As we have seen in the past two chapters, a close look at the evidence shows that Christians were never the victims of sustained, targeted persecution. Even the so-called great persecutions under emperors Decius and Diocletian have been vastly exaggerated in our Christian sources. In general, when Christians were executed, it was for activities that were authentically politically and socially subversive. In the case of the emperor Decius , it seems that the so-called persecution of Christians wasn’t aimed at Christians of all. It was a way of bringing about social and political unity in the Empire, something more like a pledge of allegiance then religious persecution.

Throughout the book, Moss details how many of the source documents for the stories about Christian martyrs were embellished, and,  at times, fabricated out of thin air.  Even some the saints revered by the Catholic church  have histories that call into question their authenticity. I was quite surprised and delighted that Moss, a professor at a Catholic university, did not shy away from the controversies surrounding the mythic stories of the Catholic church.

Moss also details how some of the ancient martyr stories were actually borrowed from other cultures and religious traditions.  There were times when I thought Moss was stretching these connections a bit, but I found the chapter, Borrowing of Jewish and Pagan Traditions, to be quite fascinating.

Even a brief study of early Christian martyrdom literature reveals that Christians were influenced by ancient Greek, Roman, and Jewish traditions about death. The heroes of the classical world were reshaped into soldiers for Christ. When people admit that Christians were heirs to this legacy, they do so selectively. Many acknowledge the Christian martyrs inherit or at least claim to inherit the mantle of martyrdom from ancient Judaism. The references to and comparisons with the Maccabees provide incontrovertible evidence that Christians saw their martyrs as part of this tradition. This much is acknowledged or at least implicitly acknowledged in most scholarly and religious treatments of the subject.

When it comes to the Greek and Roman influences, however, things are very different. We would be hard-pressed to find any modern denomination of Christianity that admits Greek and Roman heroes and heroines in their canon of martyrs, even if Christians like Justin Martyr were willing to revere Socrates as a Christian before Christ. Why the difference? The distinction is not based on the evidence, but on the way that people think about the relationship between Christians and Jews. For Christians, the Old Testament is believed to contain a series of prophecies about Jesus and the church. If Christian martyrs seem to be like figures from the old and new Testaments, it is because their deaths are fulfillments of prophecies. They are seen as being part of a single unbroken tradition, a single witness to truth.

This is a game of cultural favorites. There’s a theological explanation for the fact the Christian martyrdom stories are similar to biblical narratives of persecution, but there is no such explanation for the similarities with pagan traditions. That Christianity might have borrowed from pluralistic, polytheistic religious traditions is difficult for those who conceive of themselves as part of an unbroken singular tradition. The problem is exacerbated by the fact that Greek and Roman religious practices no longer exist. The idea that Christianity borrowed from or was dependent upon morally questionable failed religions ruffles feathers and prayer books.

The truth of the matter is that as we have seen, Christians adapted their ideas about martyrdom and sometimes even the stories about the martyrs themselves from both ancient Jewish and pagan writers. We cannot help but note the irony here. Christians are thought to be unique because they die for Christ, but the stories by which they communicate their uniqueness are borrowed from other cultures. Clearly Christian martyrdom is one of a number of ancient varieties of martyrdom. Even though early Christians adapted, augmented, and otherwise contorted ancient models in their own stories, they were nonetheless dependent upon earlier literature. To be sure, Christian martyrdom stories depart from classical examples of noble deaths, but toying with, trumping, reversing, and usurping are not the same as inventing. Early Christians consciously and deliberately harnessed the cultural power of Greek, Roman, and Jewish heroes for their own ends.

All in all, The Myth of Persecution was a great read. If I were to have any criticism of the book it would be that the chapter on how the myth of Christian persecution affects our modern culture was quite sparse, only ten pages long. I wish she had spent a lot more time dealing with how the religious-right in the United States has a martyr complex that finds its root in the ancient Christian martyrdom stories.

I also found myself wishing that Moss had written a chapter or two about the martyrdom tradition and stories found in the Protestant church.  This, I suspect, was beyond the scope of the book.

As any Evangelical knows, Foxe’s Book of Martyrs is considered one of the foundational texts of Evangelical belief. (especially in the Baptist church)  I suspect the stories complied by John Foxe have their own problems, and while Moss did briefly mention Foxe’s Book of Martyrs, she said nothing about the stories contained in the book. Maybe her next book will be on the martyrs of church after Constantine.

I heartily recommend, The Myth of Persecution.