Biologist Jerry Coyne Mentioned My Deconversion Story on his Blog

No, he didn’t write a post about my vast knowledge of science. That would have taken all of eight words: not much, but more than I knew yesterday. In the post, Why I Stopped Believing, I mentioned five of the books that played an instrumental part in my deconversion. Coyne’s book, Why Evolution is True, was one of the books I mentioned. The book was quite helpful when I was trying to hang on to some sort of God who created. One chapter in particular, Remnants: Vestiges, Embryos, and Bad Design, had a profound effect on how I viewed the natural world.

In a post titled, In Which I Help Deconvert Someone, and on What Works, Coyne writes:

I’ve always said that the definition of “success” in mentoring graduate students is “producing a student who can replace you.” And though I’ve had very few students, I’ve replaced myself in that sense at least three times, so I’m quite happy.

And I consider the definition of “success” as an anti-theist to be “turning at least one person away from the delusions of faith and towards the virtues of reason.”  After all, if theists can boast about bringing people to Jesus, why can’t atheists take pride in helping people go in the reverse direction?

Now I can’t claim full credit for doing that to any one person, but I claim partial credit for helping quite a few—or so they tell me. And I’ll add those partial successes up to assert that N > 1.

The latest partial convert is Bruce Gerencser [sic], a former Christian minister, who explains on his website what led to his leaving the church. As is nearly always true for the deconversion of ministers (or anyone else, for that matter), it is a long, tortuous, and complex process involving many inputs…

…But read Gerenser’s [sic] whole piece (it’s short), because he traces the roots of his apostasy back to the very virtues instilled in him by his religious parents, including a love of reading and having the courage of one’s convictions.

The other point this makes is that it’s better, if you want to advance reason, to write and publish (if you have that privilege) rather than to give lectures and have debates. That is because in the quietude of authorship, you can polish and fully express your views, and people can read them at leisure and compare them with contrary views. In a public talk, I often find that the audience comprises people who are already on my side, and have come out of curiosity or to seek affirmation. Those are both fine reasons, and, after all, we all need affirmation (except perhaps Christopher Hitchens!), but in truth I’d prefer a higher titer of opponents when I speak. But again, I prefer to write, and that’s why I wrote The Albatross (soon to be available in fine bookstores everywhere)… 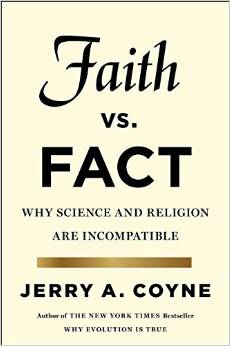 Coyne has a new book coming out in May, Faith vs. Fact: Why Science and Religion are Incompatible. You can pre order the book here. (I receive a few shekels if your order the book through this link)