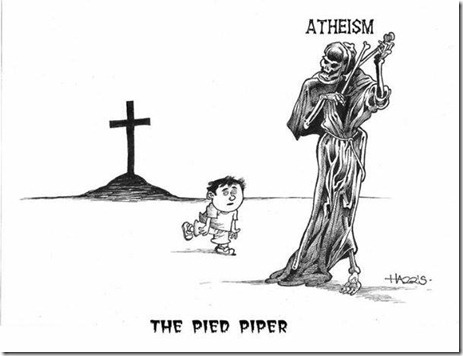 They might not publically acknowledge their fear of God’s judgment because of their pride and their love of sin but deep down inside, they know God exists. They are simply suppressing that knowledge (Rom 1:18). I remember an unbeliever sitting next to me on a jet and we were circling the airport and waiting to land because there were tornadoes nearby and the storms had large hail as well as severe wind shear. As the jet kept circling, other planes began to circle around the airport too, waiting for the tornado warnings to expire. The longer we were in flight, the more other jets were in the area and the lighter our jet became (using up fuel), the more it was tossed right and left and up and down. After this experience, the man next to me asked me about God. I sensed his fear of dying made him fear God’s judgment, knowing that he was living a sinful life (as he acknowledge to me). Unbelievers can only have “a fearful expectation of judgment, and a fury of fire that will consume the adversaries” (Heb 10:27) in near-death experiences and that’s the only fear of God they will ever know unless they repent. In the back of their minds they know that “our ‘God is a consuming fire’” (Heb 12:29) and that after death, they will be judged (Heb 9:27).

Imagine, for a moment, if atheists told Christians that believers know deep down that there is no God. Why, there would be outrage. How dare atheists invalidate their personal experiences! How dare atheists suggest that Christians do not know what they believe! Yet, Evangelicals routinely tell atheists that their unbelief is a charade; that atheists deep down (deep down where?) know that God exists. Atheists are rightly offended over such dismissals of their beliefs and personal experiences. If Christians can know in whom they have believed (2 Timothy 1:12), then atheists can certainly know in whom they have NOT believed.

I am an atheist because I do not think there is sufficient evidence for the existence of gods. I am not suppressing knowledge that tells me Jack Wellman’s version of God exists. How can Wellman possibly know that the creator God is Jehovah/Jesus — his preferred deity? What in the natural world screams to all who dare to listen that the Evangelical God created the universe 6,020 years ago? Evangelicals such as Wellman believe the Evangelical God exists because the Bible says he exists. Based on this presupposition, Evangelicals then interpret scientific data so it lines up with what God’s inspired, inerrant, infallible word says. Wellman, typical of most Evangelicals, closes his mind to anything that contradicts his Fundamentalist worldview. Such people are not seekers of truth. They think they have found the truth and have no need to consider any data that contradicts their version of truth. I can tell Wellman this much: provide evidence for the existence of the God of the Bible and I will believe. It really is that simple.

Will such evidence be forthcoming? Of course not. Wellman knows that most Christians-turned-atheists have already critically examined the evidence for the Christian God and found it wanting. What new evidence could possibly be forthcoming? In Luke 16 — the story of the rich man and Lazarus — Abraham tells the rich man — who is in hell — that unless his topside brothers listen to Moses and the prophets, they too will end up in hell. In other words, unless unbelievers heed what the Bible says they will go to hell when they die (technically they will go to the grave, not hell, and await Judgment Day). According to the Bible, God is not planning on sending a sign so people will believe (which is interesting since many Evangelicals keep saying God is giving America signs concerning his disfavor and coming judgment). God gave the world the Bible, end of story. Believe what it says or go to hell. That is, IF you can believe it, since salvation requires God giving the sinner the power to believe. No one, according to Arminians and Calvinists, believes unto salvation until God gives them eyes to see and ears to hear.

Wellman and his fellow Evangelicals refuse to accept that many atheists are quite knowledgeable about the Bible. After all, I was an Evangelical pastor for 25 years. Raised in an Evangelical home and trained at an Evangelical college, I know the Bible inside and out. I carefully weighed the Evangelical God and his errant, internally contradictory Bible on the scale of reason and found them wanting. If Wellman wants to bring atheists to the light then I suggest he do something other than quote Bible verses and make false assertions about unbelievers.

Speaking of false assertions, Wellman states that atheists do not “publically acknowledge their fear of God’s judgment because of their pride and their love of sin.” Pride? Really? What does pride have to do with atheism? Does Wellman really think atheists refuse to acknowledge the existence of the Christian God because they are too proud to do so? I assume he thinks atheists are too proud to admit they are wrong. Here’s the problem with such an argument: for atheists who were once Evangelicals, pride would have kept us in the fold. However, putting great value on truth, Evangelicals-turned-atheists refused to let cultural or family pride get in the way of their examination of Christianity. If anything, it is Evangelicals who have a pride problem. Tens of millions of Evangelical are little more than cultural Christians. It is pride (and fear) that keeps cultural Christians in the fold. If they were honest, cultural Christians would admit that they too see little evidence for the existence of the Christian God. Their lives are living proof that many Evangelicals are, in fact, atheists or agnostics. The Jack Wellmans of the church are the minority.

Wellman also states that atheists refuse to acknowledge the Evangelical God because of their “love of sin.” Countless Evangelical preachers — regurgitators of unverifiable nonsense — make the claim that atheists have secrets; that atheists are actually licentious, vile sinners. Can atheists behave badly? Absolutely. But, based on daily news headlines, it seems that it is Evangelicals that have a sin problem. Atheists, refusing to be bound by an irrelevant ancient religious text, are often quite open about their “sins.” Evangelicals, on the other hand, are taught to hide their sins under the mythical blood of Jesus. Just pray and ask for forgiveness, Evangelicals are told by preachers, and your sin debt will be wiped clean. What a way to avoid accountability for bad behavior. No need to air one’s dirty laundry. Just pray and move on to the next sin-filled night. Who is being more honest? Atheists who say, this is how we live our lives or Evangelicals who hide and obfuscate who they really are, pretending to be some sort of saints? Give me honest atheists every time.

Nothing I write in this post will crack Wellman’s cement-filled head. Now in the sunset years of life, Wellman has too much invested to walk away. In the not-too-distant future, the Evangelical God will either rapture Wellman away or call him home to be with Jesus. Or so Wellman thinks. Oh how I wish that Christians, immediately after death, could come back to life long enough to tell us that there is NOTHING that lies beyond the grave. Or at the very least, tell us that it was Wakan Tanka and not the Evangelical God who met them when they crossed to the other side. Since no one, including Jesus, comes back to life after dying, Evangelicals will continue to believe that a sweet payoff awaits them after death.