Book Review: The Divinity of Doubt by Vincent Bugliosi 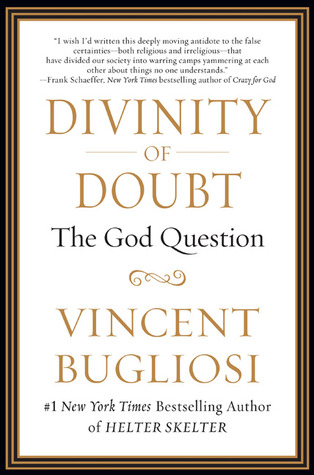 The publisher Vanguard Press sent me a review copy of Vincent Bugliosi’s latest book, Divinity of Doubt, The God Question. Divinity of Doubt is 272 pages long (338 pages with chapter notes and index) and is Bugliosi’s attempt to establish agnosticism as the only valid choice in the God debate. Bugliosi neatly divides views about God into three categories: organized religion, agnosticism, and atheism.

Bugliosi spends significant time — in fact the entire book save 3 chapters  — dismantling and shredding Christianity. He makes it clear that he does not believe the Christian God exists. He dismisses the rest of the major religions of the world in a chapter titled “Hey, Look at Us. We are Just as Silly as They Are.” Bugliosi makes it known that the world would be far better off if organized religion died a quick death.

Bugliosi’s critique of Christianity is standard atheistic fare. Long time atheists and agnostics will bore quickly when reading Divinity of Doubt. I found myself saying yeah, yeah, yeah, I agree. Ok, next. That said, Bugliosi’s book is a great primer on the theological and textual issues the Christian church faces. This would be a great book for someone who is considering leaving Christianity.

Bugliosi is rightly critical of those who believe in certainty but he often appeals to theological certainty when he writes about what bible scholars believe concerning this or that theological or historical issue. He often makes it sound as if bible scholars are unified when it comes to the textual and historical problems of the Christian bible, when, in fact, unity is a word rarely used to describe bible scholarship. Proof? Consult the true God of this world  — Google  — and you will quickly discover that practically every aspect of the Christian religion is endlessly debated. Christians can’t even agree on basic things such as God, communion, baptism, or how a person becomes a Christian.

I was astounded that Bugliosi did not mention Bart Ehrman even once. (I did not read the chapter notes so there is a small possibility Ehrman makes an honorary appearance there.) Ehrman is clearly the most popular and most widely read theologian of the 21st century. His books are a devastating critique of Christianity and Bugliosi’s failure to mention Ehrman’s books is troubling. (Not that Ehrman would have necessarily added anything to the book. Bugliosi comes to many of the same conclusions as Ehrman.) In passing I should note that Bugliosi incorrectly states that William Lane Craig is a Catholic apologist. Craig is actually an Evangelical Christian apologist.

Bugliosi spends several chapters on the subject of evolution, creationism, and intelligent design. He admits he is not a scientist but this does not keep him from diving right in anyway. Bugliosi writes:

But apart from science, I have problems with the Big Bang theory. For one thing, I simply cannot even begin to imagine how at some tiny point in time and space, some microorganism, or what have you, self exploded and created the universe, though I obviously am in no position to challenge this theory…But I do know that whatever they are, they are something, and that is the big problem. It would seem that no one can actually believe that the Big Bang exploded out of nothing, completely empty space, which would be an impossibility. It had to have exploded out of something. And no matter how small or subatomic that something is, the question is who put that something there? If it wasn’t the creator, and how did it come into existence? Remember, nothing can create itself because if it did, it would proceed itself, an impossibility.

Unlike Bugliosi, I confess not only am I quite deficient when it comes to matters of science, I also have no intentions of exposing my ignorance to those who are experts in science. I will leave it to my readers who are well-schooled in science to deal with Bugliosi’s claims. I will stick to the Bible and theology.

In a chapter titled “Atheism and Its Current Leading Prolocutors,” Bugliosi deals with the subject of atheism. Bugliosi focuses only on the writings of Richard Dawkins, Sam Harris, and Christopher Hitchens. For some unexplainable reason Bugliosi assumes that if he reads the books written by the Big Three of the Atheist movement (he ignores Daniel Dennett) he has adequately surveyed the necessary material to make a proper judgment about atheism. As a result, Bugliosi paints a truncated, incomplete picture of atheism. His book would carry far more weight with atheists IF he had broadened his horizons and referenced books written by atheists, agnostics, humanists, and skeptics who offer a different viewpoint from those of Harris/Hitchens/Dawkins.

Bugliosi hates the certainty he sees in the writings of Harris/Dawkins/Hitchens. Bugliosi wrongly assumes that these three authors are the face of atheism and that their beliefs are the beliefs of all atheists. Bugliosi rightly contends that no one can know for certain whether or not there is a God yet he discounts atheists who say just that. Dawkins admits that a person cannot, with certainty, know whether or not a God exists. Dawkins states “God almost certainly does not exist” and Bugliosi takes this to be a disingenuous statement. Why?

Atheism is all about probabilities. Does God exist? I don’t know. Is it probable God exists? No. Is it likely God exists? No. Does the Christian God, as taught in the Bible, exist? No. Rare is the atheist who says with certainty that no God exists. In fact Bugliosi proves in his book that he is every bit as much an atheist as most of the atheists I know. Bugliosi would have been better informed about atheism if he had, at a bare minimum, read the WIKI on atheism.

In the future, I hope Bugliosi will broaden his horizons when it comes to atheism. I have profited greatly from the books of Richard Dawkins, Sam Harris, and Christopher Hitchens. That said, there are many other authors, such as Michael Shermer, Richard Carrier, Hector Avalos, David Eller, S.T. Joshi, A.C. Grayling, Paul Kurtz, Bart Ehrman, and Scott Aiken/Robert Talisse, all of whom have written significant books about atheism and humanism that I have found quite helpful; books, it seems, that Bugliosi paid no attention to. Bugliosi also fails to mention the books by John Loftus  — Why I Became an Atheist and The Christian Delusion  — two books which are very helpful in laying the foundation of modern atheism.

If you are a confirmed atheist or agnostic, Divinity of Doubt will not plow any new ground for you, and it certainly does a poor job of surveying the current popular atheist scene. The book is bombastic at times and its biggest defect is how Vincent Bugliosi portrays himself. To-wit:

I seem to naturally—and not as a result, I can assure you , of any special intelligence at all—see what’s in front of me completely uninfluenced by the trappings of reputation, hoopla, conventional wisdom, and so on, put on it by others.

I suspect some readers of Divinity of Doubt will be unable to get beyond Bugliosi’s naïve view of himself. As I read what Bugliosi said about himself I found myself wanting to toss the book in the corner where I store all the books I have read by authors filled with self-importance. (Granted my sensitivity to this stems from a lifetime in a religious movement dominated by arrogant, self-important preachers.) I didn’t toss the book, and I am glad I didn’t. I had to remind myself that sometimes I have to get beyond the messenger and listen to the message. Forget Bugliosi’s character flaws; is what he preaches the truth? The answer is Yes, especially when dealing with Christianity.

I close this review with Bugliosi’s own words concerning religion:

I can say with relative confidence (because what I’m saying, at least it would seem, has to be true) that there is only one necessary religion that has any merit to the people who inhabit this earth, and that’s the Golden Rule: “Do unto others what you would want them to do unto you” (from the Beatitudes of the Sermon on the Mount [Matthew 7:12]). To treat others as you would want them to treat you is the highest, most noble form of human behavior and the basis of all morality. No matter what some papal encyclical says; no matter what some bishops’ conference says; no matter how many sacraments of the Catholic church there are, or chapters and verses in the bible, or thick and complex books by theologians, or Sunday school classes and sermons by pastors; no matter how many heated arguments there are about God, Jesus, and religion; no matter how many pilgrimages there are to Mecca, Jerusalem, and other holy places; no matter how many thousands of hours Jewish scholars struggle over the meaning of the Torah; no matter how many multimillion-dollar churches and synagogues and grand cathedrals to Christ are constructed, nothing can ever change that simple reality…..

If we must have religion, the seminal test as to the value and merit of any religion worth its salt has to be not what you believe, but what you do—that is, how you treat your fellow man. Yet in the thousands upon thousands of books, and billions upon billions of words that have been written, particularly about Christianity and the bible, what percentage of these books do you think are devoted to the only thing that counts—the Golden Rule?

To these words this atheist says Amen.

You can purchase Divinity of Doubt here.