The Long and the Short of Not Coming Out 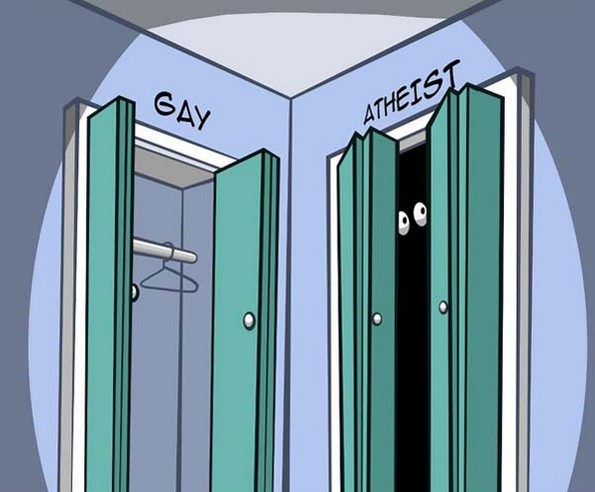 Recently my husband and I attended his high school reunion. It was held at a ranch in central Texas and was a weekend-long event. My husband and I were raised in small west Texas towns which are heavily protestant and quite conservative.

There were some 30 attendees, about half of whom were the original classmates. We began to get the idea that we were in a strongly Christian home when we noted several bibles, many more Christian-oriented books, and numerous placards with biblical sayings. When it was time for dinner, the host called us all in to pray before dinner. I lingered out on the porch, hoping to sit it out, but beckoned me, repeating “come on in – we’re going to pray.” He read a bible verse from his mobile phone, then offered up a prayer. This occurred before every meal. For the other meals, I “disappeared” at prayer time.

Our hosts are Church of Christ, and probably some of the others are as well. Some, at least, are Baptist (probably Southern Baptist). Evangelical? I don’t know, but likely. I also do not know what affiliation the others are. One woman told my husband and me that her life is much better now that she has discovered there is no hell, but we were interrupted before we could get any further in that conversation. Later, I heard her professing something about being a Christian. I wanted to get back to her about how not believing in hell is the beginning of a slippery slope at the bottom of which is non-belief in a god, but the opportunity never arose again. I wasn’t completely sure I wanted it to.

During our discussions with several people, they talked mentioned how blessed they are, and I am under the impression we were the only non-believers there. We did not spill the beans, but just listened.

There was no alcohol served at the house – no beer, no wine, no hard liquor. There was no cursing. I suspect that some of the people live that way. There are others who, although they probably are Christians, engage in at least a bit of cursing. One of them is a Vietnam vet who has various ailments which he attributes to his service, but he cannot get the VA to agree with him. I imagine he knows how to cuss up a blue streak. Others probably live the way they did this weekend.

There was a huge amount of white privilege at the reunion, although I suspect at least some of them were not conscious of it. We didn’t comment on it. There was a bumper sticker on a side table which said “Guns Kill People like Spoons Made Rosie O’Donnell Fat.” It took me several readings of that to realize that is it NOT an anti-gun sentiment!

The last morning, the hostess and I were talking about Facebook and she tried to friend me, but on her little phone I couldn’t determine which icon was mine – I change my photo often and couldn’t find mine among the choices. So she told me her FB name and suggested I friend her – hers is unique. After we got home, I pondered long and hard about whether to let her see my FB page, which is full of pro-choice and atheist posts. I wasn’t sure I wanted to let her know that we (my husband is strongly skeptical about the existence of any gods) have “strayed from the fold.” I am quite sure that if these people knew of our lack of faith, they would have spent the entire weekend trying to save us. We left with our secret intact, unwilling to come out to those people with whom my husband had grown up.

Today, I decided not to come out to a young lady today, a lady whom I will never see again. A kid was standing alongside the road today in front of a church waving a sign that said “Free Car Wash.” I opted in. After I surrendered my car for a brief, exterior-only cleaning, I was approached by a college student. I started to give her some money, but she declined. She said they are washing cars for Jesus, and will not accept a tip or donation. She asked if I go to church around here and I told her “no” and left it at that. She did not probe further. We chit-chatted about her small home town in Arkansas, her mission trip here, and her college experience. Then my car was clean. We shook hands and I left.

I wonder why I was unwilling to even mention that I am an atheist, let alone challenge her lightly on her beliefs. After all, I will never see this woman again, nor she me. I wish now that I had risked asking her why her god doesn’t heal amputees. I’m trying, more and more, to come out as an atheist, but it is hard to do in person. I have been out on Facebook for seven or eight years, and to my family for longer than that. I don’t know why I find it so difficult to come out to strangers.