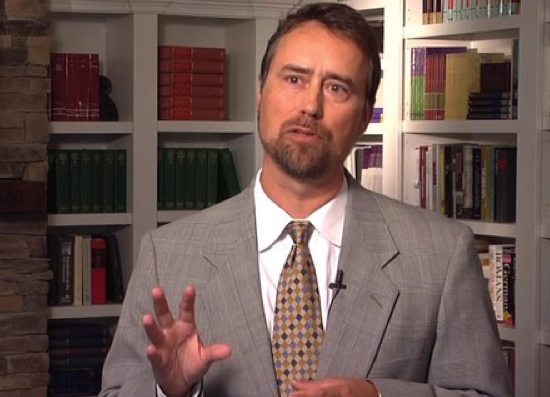 I am always amused when theologically educated Evangelicals attempt to defend Biblical inerrancy. Michael Kruger, President and Samuel C. Patterson Professor of New Testament and Early Christianity at Reformed Theological Seminary, recently posted a three-minute video that purports to answer the question, Does the Bible Have Mistakes? Strangely, the blog post Kruger wrote for the video is titled, Does the Bible Make Mistakes? I thought, isn’t the Bible an inanimate object — black ink on paper? Does Kruger believe the Bible itself is an animate object? I know there are Christians who believe that the Bible has mystical, supernatural power, but Kruger, as a Fundamentalist Reformed Christian, surely knows that, according to orthodox Christian doctrine, it is the Holy Spirit that empowers (gives life to) the Biblical text. Not that I believe such a notion is true. I am just stating what Christians have historically believed about the Bible. (I have had countless Evangelicals tell me that now I am an atheist, it is impossible for me to understand the Bible.) [The title has since been changed, As Van noted in the comments, Kruger’s post is now inerrant.]

Kruger begins the video by asserting that the Bible is the Word of God and whatever it affirms is true. According to Kruger, there are no errors, contradictions, or mistakes in the Bible. Yet, he turns right around and says that readers of the Bible must use various literary skills to “properly” understand the text. Once these skills are put to use, the errors, contradictions, and mistakes fall away.  In other words, when confronted with obvious mistakes, crack open the approved theology books and all the discrepancies will be explained away.

If someone uninitiated in Evangelical beliefs read the Bible, would they naturally conclude that the Bible is without error; that its teaching are consistent, coherent, and infallible? Of course not. Kruger is right when he mentions that many people who say the Bible has errors haven’t really studied the text. But others have. Former pastors who are now unbelievers certainly have studied the Bible from dedication to concordance. Over the course of 50 years in the Christian church and 25 years in the pastorate, I spent tens of thousands of hours reading and studying the Bible. I read scores of Evangelical (Calvinistic) theological books. Before beginning my studies I would pray and ask God to give me eyes to see and ears to hear the truth. (Many Evangelicals think that the knowledge I gained while studying the Bible magically disappeared when I deconverted.)

What kept me from “seeing” textual errors, mistakes, and contradictions was my presuppositional commitment to the Bible being without error — the Words of God. Since God was perfect, it was impossible for the Bible to be errant. It was only when I set aside my theology-driven presuppositions that I was able to see the Biblical text for what it is — a fallible collection of contradictory texts written by men.

Kruger is an educated man, so I suspect he lives with a good bit of cognitive dissonance. Surely at some level he knows inerrancy is a façade used to portray the Bible as some sort of God-inspired, God-written, supernatural text. Once inside the house of textual criticism, inerrancy is nowhere to be found, a circus mirror meant to entertain and deceive the faithful. Of course, Kruger has a vested interest in maintaining the inerrancy illusion. He’s in the business of training men for the ministry. If these preachers-to-be were told the truth about the Bible, why their home churches would gather up pitchforks and combustible materials and burn Reformed Theological Seminary to the ground, using Kruger as a quick-start fire log.

Thanks to authors such as Bart Ehrman, it is now  impossible to intellectually defend Biblical inerrancy. While in many ways, Ehrman doesn’t say anything that hasn’t been known for centuries, his books put complex textual issues in a format laypeople can understand. (You can purchase his books through Bruce’s Little Bookstore of Atheism and Humanism.)

The best antidote for inerrancy is reading Bart Ehrman. It is intellectually impossible for anyone to read several of his books and still believe that the Bible is inerrant. Remember, most Evangelical theologians agree with Ehrman on the evidence. What they disagree with is his conclusions. Sadly, many educated Evangelicals — pastors, theologians, professors — refuse to accept what is clear for all to see: that the Bible is a fallible collection of contradictory texts written by men. In many ways, these defenders of inerrancy are similar to atheist pastors, people who have invested their lives in promoting and defending Evangelicalism. Admitting that what they teach is untrue would quickly and viciously destroy their livelihood. When men have spent their lives pastoring churches or teaching seminary classes, how will they earn a living if they suddenly lose their job? So, Evangelical and atheist pastors alike continue to promote the inerrancy myth, hoping to run out the clock before they are exposed. For some of them, the personal and ethical costs are too high, so they out themselves, causing tremendous heartache and loss.

I was fifty years old when I walked away from Christianity. I can only imagine how difficult it might have been if I had been some sort of high-profile Evangelical who spent his life publicizing far and wide the Christian myth. In my case, I never made a lot of money from pastoring churches, so it was much easier for me to walk away. I had no retirement plan or 401(k) to worry about. I could make just as much money flipping hamburgers as I did preaching. Such is not the case for many pastors, so I understand why some educated Evangelicals continue to preach what they know is not true.

There will always be some educated Evangelicals who refuse to see the facts about the nature of the Biblical text. Regardless of what the evidence says, these defenders of the faith plan to die with their boots on and hands clutched to the inspired, inerrant Holy Bible. All the books to the contrary will not move them. A Fundamentalist worldview forces pastors and professors to believe and preach only what can neatly fit within the Evangelical box. Please see The Danger of Being in a Box and Why it Makes Sense When You are in it and What I Found When I Left the Box.) This is why countless educated Evangelicals believe the earth is 6,021 years old, that Adam and Eve, Moses, and Noah were real people, and the fantastical stories found in the Bible are really, really, really true. Virgins have babies, dead people come back to life, and sick people are miraculously healed through spoken words. While some of these Evangelicals will see the light (after all, I did), most of them will go to their graves certain in their beliefs. Until they are willing to consider the possibility of being wrong, there really is no hope for them.

After watching the video, please share your thoughts in the comment section. Did Kruger adequately defend inerrancy and give plausible explanations for the mistakes, errors, and contradictions to be interpreted so as to maintain Biblical inerrancy?