Quote of the Day: Revisiting My Apostasy by Mike D 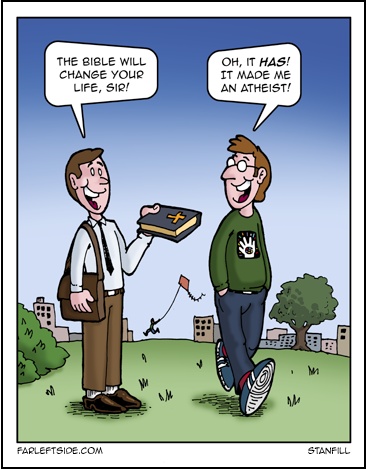 Want to rattle your faith? Read the Bible.

Perhaps I should have been prepared for the fact that answers to my many-religions questions were not forthcoming in the Bible. It was, to say the least, disheartening. Instead, I turned to the theology of the faith itself, particularly the book of Hebrews. Hebrews explains how the death of Christ is wed to the Old Testament covenants that involved ritual animal sacrifice. The Jewish people sacrificed animals to appease the wrath of God brought upon them by their sins; Christ was a perfect sacrifice that allowed the old covenant to be discarded and a new one, based on faith, was forged.

Except, none of this made any sense to me at all. Why did God want ritual animal sacrifice in the first place? What does that have to do with forgiveness? Perhaps, I thought, God wanted people to make a sacrifice — farm animals, in those days, were precious resources. But that explanation evaporates with Christ, since he took the sacrifice upon himself. What was so special about the “blood of Christ”? What did that have to do with God’s willingness to forgive people? And why did God spend centuries on ineffectual covenants in the first place? How does an omnipotent deity “sacrifice” anything at all — Jesus could have, conceivably, poofed himself right back into existence or simply refused to die in the first place. Generally when we mortals talk about “sacrifice”, it means something quite different. We don’t get to come back a few days later and float into the clouds.

Worse, Christianity holds that Christ is God. How can God sacrifice himself to himself to fulfill his own covenant? A covenant whose terms were, as far as I could tell, completely arbitrary! Adding insult to injury is the fact that modern Christianity (generally) holds that humans are “fallen”, and born into sin. Even those few who reject Original Sin still accept the Biblical decree that “all have sinned and fallen short of the glory of God”. In other words, the system is rigged. You’re a sinner, and there’s nothing you can do to change that. But God can save you, as long as you assent to the belief that he created a convoluted system of arbitrary covenants and “sacrificed” himself to himself to appease himself of the terms he created so he could forgive you for being what you had no choice to be — a flawed human being. I should point out that it’s utterly irrelevant whether someone believes it’s all literal, as in the “penal substitution theory of atonement”, or they believe it’s either all or in part metaphorical. Either way, it doesn’t make an iota of sense.

Confused and frustrated, I sought out some church leaders to discuss these matters. One chaplain, in particular, was particularly patient with me as I probed for answers about the blood of Christ, ritual sacrifice, and atonement. But he couldn’t offer anything more than trite platitudes about having faith, that there are some thing we just don’t understand. Maybe that was good enough for him, but I couldn’t assent to beliefs that were, on their face, ridiculous. Frankly, I didn’t think it was too much to ask that a logically coherent explanation of basic Christian theology was forthcoming. These aren’t tertiary issues of theology, after all — they’re the fundamentals of what Christianity is in the first place.