Quote of the Day: Massachusetts Puritans View of Sex by Jason Dikes 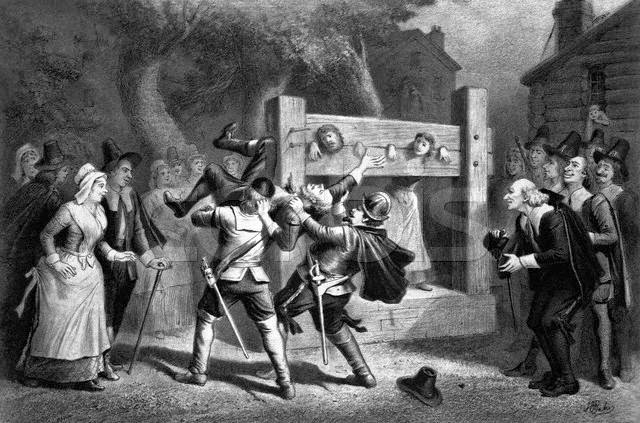 Sex outside of marriage, however, was regarded very differently. The Puritans followed the teachings of the Old Testament in believing that adultery was a sin of the deepest dye. They defined an adulterous act in the conventional way as extramarital sex involving a married woman (not necessarily a married man), but punished both partners with high severity. Their criminal codes made adultery a capital crime, and at least three people were actually hanged for it in the Puritan colonies.

When cases of adultery occurred, it was not uncommon for entire communities to band together and punish the transgressors. In the town of Ipswich, Massachusetts, for example, a married woman named Sarah Roe had an affair with a neighbor named Joseph Leigh while her mariner-husband was away at sea. Several townsmen warned them to stop.When they persisted, no fewer than thirty-five Ipswich neighbors went to court against them and gave testimony that communicated a deep sense of moral outrage. In this case, adultery could not be proved according to New England’s stringent rules for capital crime, which required two eye-witnesses to the actual offense. But the erring couple were found guilty of “unlawful familiarity” and severely punished. Joseph Leigh was ordered to be heavily whipped and fined five pounds, and Sarah Roe was sent to the House of Correction for a month, with orders that she was to appear in Ipswich meetinghouse on lecture day bearing a sign, “For My baudish Carriage,” written in “fair capital letters.” In this case as in so many others, the moral code of Puritan Massachusetts was not imposed by a small elite upon an unwilling people; it rose from customs and beliefs that were broadly shared throughout the Puritan colonies.

In cases of fornication the rules were also very strict. For an act of coitus with an unwed woman, the criminal laws of Puritan Massachusetts decreed that a man could be jailed, whipped, fined, disfranchised and forced to marry his partner. Even in betrothed couples, sexual intercourse before marriage was regarded as a pollution which had to be purged before they could take its place in society and — most important — before their children could be baptized. In both courts and churches, the Puritans created an elaborate public ritual by which fornicators were cleansed of their sin, so that they could be speedily admitted to full moral fellowship.

Puritan attitudes were almost maniacally hostile to what they regarded as unnatural sex. More than other religious groups, they had a genuine horror of sexual perversion. Masturbation was made a capital crime in the colony of New Haven. Bestiality was punished by death, and that sentence was sometimes executed in circumstances so bizarre as to tell us much about the sex ways of New England. One such case in New Haven involved a one-eyed servant named George Spencer, who had often been on the wrong side of the law, and was suspected of many depravities by his neighbors. When a sow gave birth to a deformed pig which also had one eye, the unfortunate man was accused of bestiality. Under great pressure, he confessed, recanted, confessed again, and recanted once more. The laws of New England made conviction difficult: bestiality was a capital crime and required two witnesses for conviction. But so relentless were the magistrates that the deformed piglet was admitted as one witness, and the recanted confession was accepted as another. George Spencer was hanged for bestiality.

This hostility to unnatural sex had a demographic consequence of high importance. Puritan moralists condemned as unnatural any attempt to prevent conception within marriage. This was not a common attitude in world history. Most primitive cultures have practiced some form of contraception, often with high success. Iroquois squaws made diaphragms of birchbark; African slaves used pessaries of elephant dung to prevent pregnancy. European women employed beeswax disks, cabbage leaves, spermicides of lead, whitewash and tar. During the seventeenth and early eighteenth century, coitus interruptus and the use of sheepgut condoms became widespread in Europe.

But the Puritans would have none of these unnatural practices.They found a clear rule in Genesis 38, where Onan “spilled his seed upon the ground” in an effort to prevent conception and the Lord slew him. In Massachusetts, seed-spilling in general was known as the “hideous sin of Onanism.” A Puritan could not practice coitus interruptus and keep his faith. Every demographic test of contraception within marriage yields negative results in Puritan Massachusetts. The burden of this taboo rested heavily upon families throughout New England. Samuel Sewall, at the age of 49, recorded the birth of his fourteenth child, and added a prayer, “It may be my dear wife may now leave off bearing.” So she did, but only by reaching the age of menopause.