There Are So Many Gays in the Olympics Now 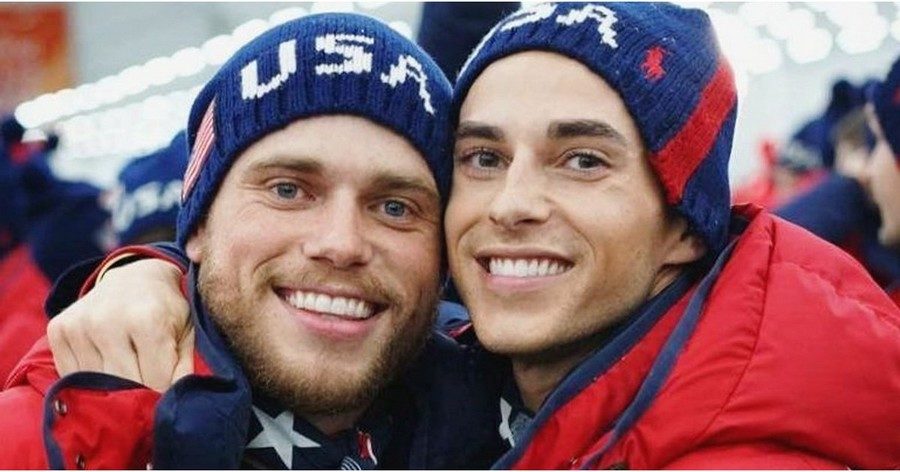 My wife and her mother talk via telephone every Sunday evening around 9:00 PM. One recent topic of discussion was the Winter Olympics. Polly and her Mom both shared what events they liked watching. Polly’s mom, a devout Independent Fundamentalist Baptist (IFB) Christian, shared one observation that left Polly and me laughing when she told me what her mom had said. There sure are a lot of gays in the Olympics now, Mom said, with, I am sure, a shaking of her head a low sounding, umm hmm — the sound she makes when something or someone doesn’t meet her approval.

Polly said nothing. She could have, of course, told her mom that there have always been gay athletes in the Olympics. Gays, gays, gays, everywhere gays, but for most of Mom’s life, they quietly hid in dark closets, so she didn’t see them. Out of sight, out of mind. Now that closet doors have been flung open, Fundamentalists are forced to see and engage people who are considered by them to be abominable reprobates. I have no doubt that Fundamentalists wish that gays would stop flaunting their sexuality — you know like heterosexuals flaunt theirs.

Mom’s youngest brother died of a viral heart disease at age fifty-one. Art was a wonderful man, a pacifist who refused to carry a gun during the Vietnam War. He was a telecommunications operator. Art lived in Michigan, hours away from his Fundamentalist family. When he traveled to Ohio to visit on holidays, he would attend church with the family at the Newark Baptist Temple. I never heard Art talk about God, Jesus, the Bible, or Christianity. He supposedly made a profession of faith as a boy, but I doubt that Art attended church other than when he was visiting his Fundamentalist family. After Art died, it was left to his two preacher’s-wife sisters to settle his estate and take care of his personal property. There were things “found” at his apartment that still can’t be talked about to this day. I’ve thought, over the years, surely everyone knew Art was gay. The first time I met Art was Thanksgiving 1976. I knew immediately that Art was “different” from the rest of us fine upstanding Christians. It’s too bad he died so young. I suspect he would have found today’s societal openness towards gays liberating. I would love to have had an opportunity to talk to him about life as a gay man in a Fundamentalist Baptist family.

I don’t fault my mother-in-law for being homophobic. She was raised in a Fundamentalist Christian home where human sexuality was defined by the Bible. Gay people were disgusting, vile cretins in need of old-fashioned Baptist salvation. Getting saved turned sinners into saints, homosexuals into heterosexuals. This is how I was raised too. From my elementary school years forward, I heard pastors, youth directors, and Sunday school teachers say that God destroyed Sodom and Gomorrah over the sin of ho-mo-sex-u-al-ity (shout the word loudly, enunciating each syllable while pounding on the pulpit). Gay people were viewed as sexual predators. No child was safe when near homosexuals. Church was considered a safe haven because there supposedly weren’t any gays in IFB churches.

I didn’t personally know a gay person until high school. I knew a lot of people who were called queers and faggots, but these slurs were often hurled towards boys who refused to participate in gym or who acted in ways deemed unmanly. They may or may not have been gay. In ninth grade, my gym teacher decided to teach us how to square dance. My pastor got wind of this and made a fuss. Dancing? In school? This resulted in me sitting on the sidelines while everyone else, save two other boys, learned to do-si-do and swing their partner round and round. The other two boys? Yeah….the two “queers” who refused to participate in gym. I was thoroughly embarrassed by having to sit with these boys. (Please read Good Baptist Boys Don’t Dance.)

I am sure my mother-in-law, along with her fellow Christians, is upset and alarmed over how out-in-the-open gay people are these days. Why, there’s even gays kissing on TV! Umm hmm. What Fundamentalists fail to understand is that there have always been gay people. Religious oppression kept them from openly expressing their sexuality. Now, LGBTQ people are out of the closet and openly living their lives as they see fit. Their openness scares the Jesus right out of Fundamentalists. They genuinely believe that homosexuality is a sin above all sins, and that societies which endorse and support such behavior will be judged and destroyed by God. This is why Fundamentalists opposed same-sex marriage and continue to threaten boycotts of companies that support the “gay agenda” or the “gay lifestyle.”  The problem now, of course, is that anti-gay Fundamentalists make up a small and shrinking percentage of Americans and tend to live in southern or rural communities. They no longer have the political power necessary to turn back the Sodomite horde. As the United States becomes more inclusive and tolerant, Fundamentalists are forced to admit that Christianity no longer rules the roost; that even some Evangelicals now think it is okay for people to be gay; that come the next Olympics there will be gay athletes. Umm  hmm…..