Quote of the Day: Jewish Woman Wants Sixty-Seventh Book Added to the Bible — Book of Trump 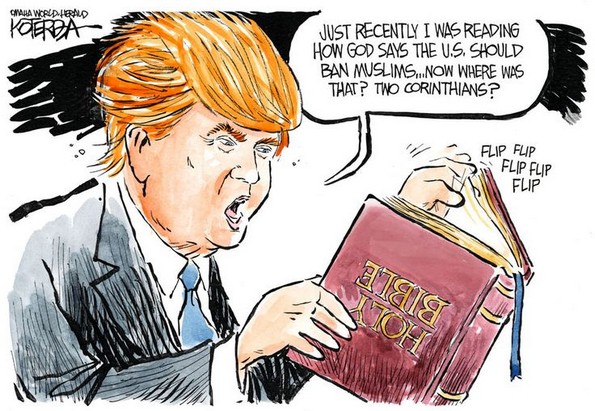 In nuptial terms, our countries [Israel and the United States] celebrated their “golden anniversary” more than 20 years ago. We are now at platinum – a miracle of preciousness, radiance, and endurance. And the man who most deserves credit for this is President Donald Trump.

Under his watch, America has finally made good on its decades-old pledge to formally recognize Jerusalem as Israel’s capital and move the US Embassy there. In another service to historical justice, Trump declared the Golan Heights to be Israeli territory, and in service to the security of Israel and the whole world, he withdrew the United States from a nuclear deal with Iran that was a contemporary echo of the Munich Agreement.

Trump and his senior staff have also dispensed with the useless mold of the so-called peace process, which had been bunged up by dishonesty and hypocrisy. Their administration has made clear that the Middle East must come to terms with an Israel that is proudly permanent in the land of Zion – an Israel whose Jewish roots run deepest and whose ancestral, sovereign claims are without equal.

Trump is a man of his word. On the campaign trail, he promised to protect Israel, to move the US Embassy to Jerusalem, to quit the Iran nuclear deal. And he has kept each and every one of those promises – unlike previous presidents who traded principle for political expediency.

Trump is a businessman and a statesman with an instinct for justice. He sees an Israel that does whatever is necessary for its security and defense, against the odds and sweeping international consensus. These are the kind of nations and people that he likes to deal with.

Trump is also a patriot who wants to make America great again. He is constantly aware of that cost that the United States risks paying should it lose credibility. An America the projects strength and credibility rallies most world powers to it; these, in turn, respect and value its steadfast loyalty to its allies, chief among them Israel.

By rights, Trump should enjoy sweeping support among US Jews, just as he does among Israelis. That this has not been the case (so far; the 2020 election still beckons) is an oddity that will long be pondered by historians. Scholars of the Bible will no doubt note the heroes, sages, and prophets of antiquity who were similarly spurned by the very people they came to raise up.

Would it be too much to pray for a day when the Bible gets a “Book of Trump,” much like it has a “Book of Esther” celebrating the deliverance of the Jews from ancient Persia?