Category: Quote of the Day

Quote of the Day: The Evolution of the Abrahamic God 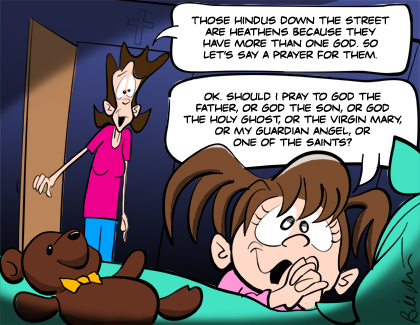 This much is accepted by most Biblical scholars, including some who are believing Jews or Christians. But things get more controversial when you suggest that there was a long time when even “monolatry” was too strong a word from mainstream Israelite doctrine — a time when not all non-Yahweh gods were considered evil or alien; a time when Yahweh was ensconced in an Israelite pantheon, working along side other gods.

Yet, if you read the scriptures closely, you’ll soon see hints of such a time. The Bible famously says that God “created man in his own image,” but those aren’t Yahweh’s words. When Yahweh is actually quoted, in the previous verse, he says, “Let us make man in our image, after our likeness.” (Genesis 1:26) Then when Adam eats the forbidden fruit, Yahweh says, “Behold, the man has become like one of us, knowing good and evil.” When people start building the Tower of Babel, which will reach to the heavens, and Yahweh opts for preemptive intervention, he says, “Come, let us go down, and there confuse their language, that they may not understand one another’s speech.” (Genesis 11:7)

Us? Who is us? If you ask this question of some Jewish of Christian clergy, you may get such answers as “angels” or the “heavenly host, God’s army.” In other words, Yahweh  may be accompanied by other supernatural beings, but none of them qualify as gods. The Bible says otherwise. It talks more than once about a “divine council” in which God takes a seat ; and the other seats don’t seem to be occupied by angels Psalm 82 says: “God has taken his place in the divine council; in the midst of the gods he holds judgment.” And God himself, addressing the other council members a few verses later, says, “You are gods.”

The many biblical references to the existence of multiple gods are in a sense amazing. For, though the Bible was composed over many centuries, the earliest parts of it passed through the hands of later editors who decided which books and verses to keep and which to discard — and who seem to have had a bias against polytheism. So those hints of Israelite polytheism that remain in the Bible are probably, as Mark S. Smith suggested in his book The Origins of Biblical Monotheism, “only tip of the iceberg.”

— The Evolution of God by Robert Wright, The Emergence of Abrahamic Monotheism, pages 104-106

Purchase the books mentioned in this quote

The Evolution of God by Robert Wright

The Origins of Biblical Monotheism: Israel’s Polytheistic Background and the Ugaritic Texts by Mark S. Smith