Black Collar Crime: Southern Baptist Leader Joe Knott Terrified Over What Will Happen if Convention Tries to Stop Sexual Abuse in Their Churches

I am terrified that we are breaching our long-standing position of being a voluntary association of independent churches, when we start telling churches that they should do this or do that to protect children or women.

I guarantee you women and children are going to be victimized no matter how much — and that is going to make us potentially targets of great class-action lawsuits, which could be the end of the Southern Baptist Convention.

I am speechless. Until the Joe Knotts of the world are run out of the Southern Baptist Convention, no real and lasting change will take place. He is part of the problem, not the solution. For Knotts and others like him, ecclesiology is more important than protecting children and women (and men too) from sexual predators who freely roam the halls of Southern Baptist churches. Why, if the SBC does anything to protect children and women from abuse, it could open the Convention to lawsuits. Your point, Joe? The executive committee, along with countless churches, pastors, and other leaders should be held accountable for the abuse that has happened on their watch. That’s the price that must be paid for decades of concealment and inaction.

What Will the IFB Church Movement Do About Sexual Abuse Allegations? 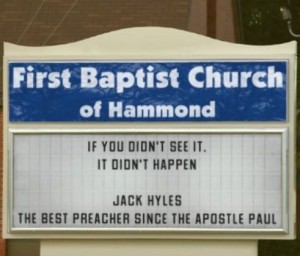 In the post that follows, I deliberately paint with a broad brush. If what I write doesn’t apply to your church or your pastor, then feel free to ignore my words. Be aware that I am no friend of the IFB church movement. It will be a good day when every IFB church in America is shuttered. IFB beliefs and practices are psychologically harmful, and in some instances physically harmful. There are better, kinder, gentler expressions of religious faith available for people who need it. I have spent the last decade telling my own story and listening to the stories of others. So much pain, so much abuse. The only advice I can give is this: RUN!

Answerable to no one but God — who never says a word to them — IFB churches are often controlled by authoritarian pastors who rule their churches with a rod of iron. Believing that they are divinely called to be pastors and commanded in Scripture to rule over their churches, these so-called men of God far too often become a law unto themselves. Their churches become their possessions, their ministries given to them by God to lead, direct, and control. It is not uncommon, much like in the business world, for IFB pastors to be the CEOs of their churches for decades, and when they retire, to pass their kingdoms on to their sons. Their churches become the family business. Ask IFB congregants where they attend church and they will often reply, not First Baptist Church, but Pastor or Bro. Johnny B. Awesome’s church. IFB churches are pastor-centric. Everything revolves around the pastor and his decrees.

The church culture described above is a perfect medium for sexual abuse, sexual misconduct, and other predatory behavior. There’s little-to-no accountability to anyone except God, and I can safely say that he hasn’t been seen in IFB churches in a long, long time. While an IFB pastor is answerable to his church’s membership, practically speaking, unless he steals money from the church, is caught fucking the deacon’s wife in his study, or some other egregious “sin,” he is pretty much safe from being fired. Over time, such men gain more and more power, so much so that it becomes almost impossible for congregants to get rid of them. I have seen church constitutions — often written by the pastors themselves — that require a seventy-five-percent “yes” vote to remove a pastor.

IFB church members are often taught to implicitly trust their pastors and to ignore any rumors they might hear about them. (Please see Sexual Abuse and the Jack Hyles Rule: If You Didn’t See It, It Didn’t Happen.) Rumors swirled around Jack and David Hyles for years, yet because church members were taught (indoctrinated) to “trust and ignore” the Hyleses escaped being held accountable for their abhorrent criminal behavior. Yes, I said “criminal.” It is clear from the latest Fort Worth Star-Telegram report on sexual abuse in IFB churches that David Hyles committed sexual crimes and his father covered them up. This story has been repeated in numerous IFB churches over the years. Don’t think for a moment that the latest report on sexual abuse is new. This kind of behavior has been going on ever since I was a teenager at Trinity Baptist Church in Findlay, Ohio, five decades ago. It was covered up back then and it is covered up today.

Sexual assaults, rapes, predatory behavior, and adultery are covered up way too often in IFB churches. Protecting the “good” name of the church in the community becomes more important than rooting out predatory behavior. Far too often, victims are either not believed or are blamed for what happened to them. IFB pastors are known for their sermons about how women dress, and how inappropriately dressed women are culpable for how poor, hapless, weak Baptist men respond to their carnal display of flesh. Women (and teen girls) are expected to be gatekeepers; to dress and act in ways that keep church men and teen boys from having lustful thoughts about them. When Jack Schaap, the former pastor of First Baptist Church in Hammond, Indiana and Jack Hyles’ son-in-law, was arrested for sexually assaulting a church teenager he was counseling, more than a few Schaap defenders blamed the girl for seducing him. She was called a slut, a whore, a Jezebel. Schaap was viewed as a tired, overworked man of God who was an easy mark. Never mind the fact that Schaap was old enough to be the girl’s father and that he, through letters, cards, and text messages, sexually manipulated this help-seeking, vulnerable, naive girl. His disgraceful fall into sin was all her fault, according to his defenders.

The title of this post asks, What Will the IFB Church Movement Do About Sexual Abuse Allegations? The answer should be clear to all who are reading: NOTHING! As long as IFB churches remain independent and accountable to no one but the silent God, sexual abuse will continue. As long as congregants are taught to revere, fear, and obey their pastors, it is unlikely that predatory IFB preachers will be in danger of exposure or criminal prosecution. As long as IFB preachers continue to promote warped views of human sexuality and sexual accountability, it is doubtful that predators and abusers will be held accountable for their crimes. And as long as churches value their own reputations more than the innocence of their children and the vulnerability of their women, pastors will continue their wicked ways.