The Road to Atheism is Littered with Well-Read Bibles 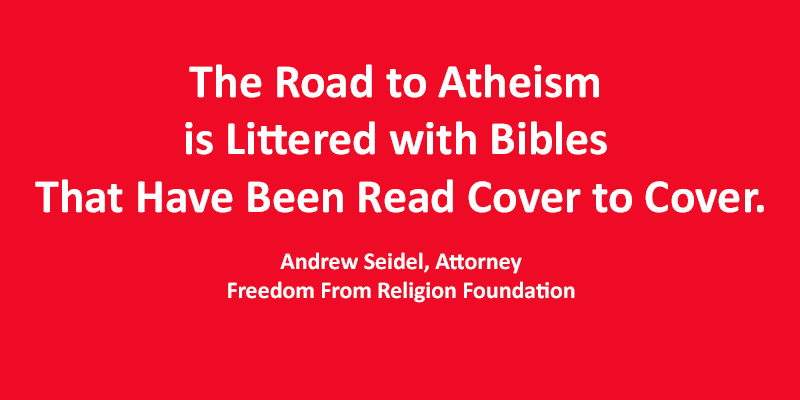 One of the charges Evangelical apologists love to level against atheists is that they don’t really know what the Bible says and teaches; that atheists are ignorant of that which they criticize. While it is certainly true that some atheists know very little about the Bible, the same can’t be said of ex-pastors such as myself, John Loftus, Dan Barker, David Madison, and the members of the Clergy Project. Nor can it be said of countless atheists who were formerly devoted followers of Jesus Christ; former Evangelicals who daily read and studied their Bibles and attended church every time the doors were open; former Evangelicals who devoured books on Christian theology and loved to talk about the teachings of the Bible. Such people know the Bible inside and out. Their paths from Evangelicalism to atheism are littered with well-worn, dog-eared Bibles. (Please see the From Evangelicalism to Atheism series.)

Many Evangelical apologists believe that only through the indwelling of the Holy Spirit can one truly understand the teachings of the Bible. Thus, a one-time Evangelical such as Dr. Bart Ehrman may have an academic understanding of the Bible, but he can’t really “know” the depths and intricacies of its teachings. This line of argument, of course, is an attempt to dismiss out of hand criticisms of the Bible by atheists and other non-Christians. Evidently, the moment I said I was no longer a Christian, everything I learned about the Bible during the fifty years I spent in the church and twenty-five years I spent in the ministry disappeared in some sort of supernatural Men in Black mind wipe. Thoughtful Evangelicals realize the absurdity of this argument and refrain from using it, but alas many Evangelical zealots aren’t “thoughtful.” In their minds, atheists are the enemies of God, reprobates, apostates, and haters of God, the Bible, and Christianity. No matter what we might have known in the past, now that we are followers of Satan, our minds and intellectual processes are ruined. No atheist can know as much about the Bible as a Spirit-filled Evangelical, or so they think anyway.

Does it really take the Holy Spirit to know and understand the teachings of the Bible? Of course not. And it is absurd to argue otherwise. The Bible is a book, no different from the Quran, Book of Mormon, or Huckleberry Finn. Any claims made for its supernatural nature require faith, a faith that is unnecessary to have when it comes to understanding the Bible. If a person can read, is he or she not able to understand what the Bible says? Don’t Evangelicals themselves admit this fact when Gideons hand out Bibles and non-Christians are encouraged to read the gospels? If the teachings of the Bible cannot be naturally understood without some sort of Holy Ghost magic, why challenge unbelievers to read the wrongly-called Good Book?

I suspect the real issue is that when atheists read the Bible, they are free from the constraints of doctrinal statements, systematic theologies, and hermeneutics. One of the best pieces of advice I ever heard about reading the Bible came from Dr. Ehrman, who suggested reading each book of the Bible as a stand-alone text. Let the author speak for himself. Of course, such readings of the Bible destroy attempts by Evangelical apologists to harmonize the Bible — to make all the disparate, contradictory parts “fit.” Go back and read the first three chapters of the book of Genesis without appealing to parlor tricks used to make the text mesh with what Trinitarian Evangelicals believe about God and creation. A fair-minded reader might conclude that there are multiple gods. An excellent book on this subject is The Evolution of God by Robert Wright.

Over the course of the twenty-five years I spent in the ministry, I read the Bible from cover to cover numerous times. I spent thousands of hours reading and studying the Bible, and thousands of more hours reading theological tomes. Even today, a decade removed from the last time I darkened the doors of a Christian church, I still have a mind brimming with Bible verses and things I learned as an Evangelical pastor. One of the ironies of the health problems I have, with its attendant memory problems, is that I tend to have problems with short-term memory, not long-term. Thus, I can’t remember that recent Christopher Hitchens quote I read, but I can remember a quote by Charles Spurgeon or John MacArthur from decades ago. Believe me, there are days when I wish I could flush my mind of all the religious nonsense that clutters up its space. So much wasted mental real estate . . .

The reasons I divorced Jesus are many. I have spent countless hours writing about why I am no longer a Christian. That said, the primary reason I am an atheist today is the Bible. As I began to have questions and doubts about the central claims of Christianity, I decided to re-read and study the Bible, determining what it was I really believed. I found that many of my beliefs were false or grounded in narrowly defined theological frameworks that could not be sustained intellectually. Once I let the Bible speak for itself, my Evangelical house came tumbling to the ground. I tried, for a time, to find a resting spot that allowed me to hang on to some sort of Christian faith. Alas, I did not find these things satisfying intellectually. Eventually, my slide down the slippery slope landed me where I am today — a committed agnostic and atheist.

At the very least, Evangelical apologists should grudgingly admit that many Evangelicals-turned-atheists know the Bible as well they do. Now if we could get apologists to know and understand atheism/agnosticism/humanism as well as many ex-Evangelicals know the Bible, that would be great. People such as myself have a distinct advantage over many Evangelical apologists. We have lived on both sides of the street. We have read atheist authors and Christian ones. That’s why, when an Evangelical wants to argue with me about the inerrancy and infallibility of the Bible, I ask them, have you read any of Bart Ehrman’s books? If they haven’t, I don’t waste my time with them. Their problem is one of ignorance, and until they are willing to do their homework, there’s really no hope for them.

I will forever, until dementia or death robs me of my mind, remain a student and reader of the Bible.  My reasons for doing so are different today from what they were when I was pastoring churches, but my goal remains the same: to help people see and understand the truth.

Questions: Bruce, Have You Heard of The Clergy Project?

Konnie asked, “Bruce, have you heard of The Clergy Project?”

I deconverted in 2008, and from the start was an out-of-the-closet ex-Evangelical-pastor-turned-atheist. When The Clergy Project was ramping up, I was asked to help with interviewing prospective members. I have also sent a number of unbelieving clergy to The Project. While I am still a member of the Project, due to time constraints, I am not involved in its day-to-day machinations. I fully support their work.

Konnie also asked, “Bruce do you listen to any atheist podcasts or read atheist blogs?”

I listen to very few podcasts. I simply do not have the time to do so. On occasion, I will listen to the Freethought Radio podcast. I do follow and read more than one hundred agnostic/atheist/humanist blogs. I also follow and read more than two hundred Christian/Evangelical blogs. Of course, I do not read every post on every site. I use an RSS reader to organize and read the blogs I follow. Several times a day, I scroll through the post titles and read those which sound interesting. This allows me to keep up with what is going on in both the atheist and Evangelical communities.