Duck Dynasty Patriarch Phil Robertson, in His Own Words 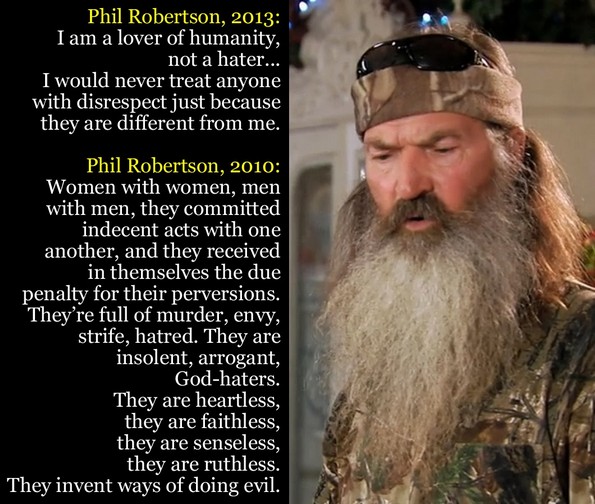 I like Christian Fundamentalist Phil Robertson. Why? Because he is willing to say out loud what many Evangelical/Fundamentalist/Conservative Catholic Christians think or say in the safe confines of their churches.

Here’s Duck Dynasty’s Phil Robertson in all his glory:

“I’ll make a bet with you. Two guys break into an atheist’s home. He has a little atheist wife and two little atheist daughters. Two guys break into his home and tie him up in a chair and gag him. And then they take his two daughters in front of him and rape both of them and then shoot them and they take his wife and then decapitate her head off in front of him. And then they can look at him and say, ‘Isn’t it great that I don’t have to worry about being judged? Isn’t it great that there’s nothing wrong with this? There’s no right or wrong, now is it dude?’ Then you take a sharp knife and take his manhood and hold it in front of him and say, ‘Wouldn’t it be something if this [sic] was something wrong with this? But you’re the one who says there is no God, there’s no right, there’s no wrong, so we’re just having fun. We’re sick in the head, have a nice day.”

“Have you ever heard this many lies coming out of Washington D.C. since you’ve been on the earth? Have you ever heard more? You say where in the world is it coming from? They champion perversion, they champion murder, aborting their children and they are champions of lies. I mean I’m listening to them and thinking, ‘dude, what?’ ‘Yeah, this bunch here, they’re the kind that clings to their guns and their Bibles,’ I’m thinking, yeah, we may need them.”

“It seems like, to me, a vagina — as a man — would be more desirable than a man’s anus. That’s just me. I’m just thinking: There’s more there! She’s got more to offer. I mean, come on, dudes! You know what I’m saying? But hey, sin: It’s not logical, my man. It’s just not logical.”

“Everything is blurred on what’s right and what’s wrong. Sin becomes fine. Start with homosexual behavior and just morph out from there. Bestiality, sleeping around with this woman and that woman and that woman and those men. Don’t be deceived. Neither the adulterers, the idolaters, the male prostitutes, the homosexual offenders, the greedy, the drunkards, the slanderers, the swindlers — they won’t inherit the kingdom of God. Don’t deceive yourself. It’s not right.”

“We murder each other and we steal from one another, sex and immorality goes ballistic. All the diseases that just so happen to follow sexual mischief… boy there are some microbes running around now.”

“Now to me either it’s the wildest coincidence ever that horrible diseases follow immoral conduct, or it’s God saying, ‘There’s a penalty for that kind of conduct.’ I’m leanin’ toward there’s a penalty toward it.”

” I am just reading what was written over 2000 years ago. Those who live like this will not inherit the kingdom. All I did was quote from the scriptures, but they just didn’t know it…

“Women with women. Men with men. They committed indecent acts with one another. And they received in themselves the due penalty for their perversion. They’re full of murder, envy, strife, hatred. They are insolent, arrogant God haters. They are heartless. They are faithless. They are senseless. They are ruthless. They invent ways of doing evil.”

“Why do they murder and why do they hate us? Because all of them … 80 years of history, they all want to conquer the world, they all rejected Jesus and they’re all famous for murder. Nazis, Shintoists, Communists and the Mohammedists. Every one of them the same way.”

“From one man God made all nations of men. We all came from the same dude, and I don’t know what color he was.”

A good woman is “hard to find. Mainly because these boys are waiting until they get to be about 20 years old before they marry ’em. Look, you wait till they get to be about 20 years old, they only picking that’s going to take place is your pocket. You gotta marry these girls when they’re 15 or 16, they’ll pick your ducks. You need to check with mom and dad about that, of course.”

“I never, with my eyes, saw the mistreatment of any black person. Not once. Where we lived was all farmers. The blacks worked for the farmers. I hoed cotton with them. I’m with the blacks, because we’re white trash. We’re going across the field. … They’re singing and happy. I never heard one of them, one black person, say, ‘I tell you what: These doggone white people’ — not a word!

“We never, ever judge someone on who’s going to heaven, hell. That’s the Almighty’s job. We just love ‘em, give ‘em the good news about Jesus — whether they’re homosexuals, drunks, terrorists. We let God sort ‘em out later, you see what I’m saying?”

“All you have to do is look at any society where there is no Jesus. I’ll give you four: Nazis, no Jesus. Look at their record. Uh, Shintos? They started this thing in Pearl Harbor. Any Jesus among them? None. Communists? None. Islamists? Zero. That’s 80 years of ideologies that have popped up where no Jesus was allowed among those four groups. Just look at the records as far as murder goes among those four groups.”

“God says, ‘One woman, one man,’ and everybody says, ‘Oh, that’s old hat, that’s that old Bible stuff’ and I’m thinking well, let’s see now. A clean guy, a disease-free guy, and a disease-free woman, they marry and they keep their sex between the two of ‘em, uh, they’re not gonna get chlamydia and gonorrhea and syphilis and AIDS. It’s, it’s safe.”

“Our founding fathers started this country and built it on God and His Word, and this country sure would be a better place to live and raise our children if we still followed their ideals and beliefs.”

“I love all men and women. I am a lover of humanity, not a hater. … I have been immoral, drunk, high. I ran with the wicked people for 28 years and I have run with the Jesus people since and the contrast is astounding.”

“We’re Bible-thumpers who just happened to end up on television. You put in your article that the Robertson family really believes strongly that if the human race loved each other and they loved God, we would just be better off. We ought to just be repentant, turn to God, and let’s get on with it, and everything will turn around.”