Christians Say the Darnedest Things: Atheists are a Foolish, Sad, and Predictable Lot 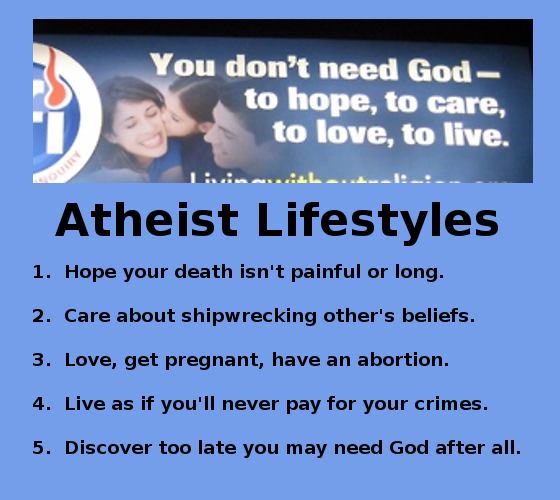 What a foolish, sad, and predictable lot. They [atheists] appear almost like a new species of humanity, a strange mutation. And like most mutations, they present a harmful, not helpful, distortion. They begin with the assumption of naturalism and, wonders of wonders, they always conclude with naturalism. They cannot find God because their philosophy allows none to exist, having excluded Him by definition. They seem not to understand that apart from their baseless assumption, their arguments ring hollow to the rest of us. The book of Ecclesiastes, while speaking in another vein, gives an excellent description of their folly. “This also is vanity and a striving after wind (4:4).

They do not see — nor do they want to see — that to begin with God gives at least a viable base for making an argument. On the other hand, to begin without Him brings with it a necessary inconsistency and gives the lie (or doubt) to everything. One cannot present a valid argument for truth, a logical argument for reason, a moral argument for good and bad.  And baseless arguments are usually — and should be — considered fallacious.

Really now. is it not a bit frustrating? You [atheists] surely want to discredit my contentions. But as I have shown, you have none of the raw material from which to formulate a counter-argument. To answer me, you will need to employ reason in an effort to establish truth. But I have shown that these belong to God, and that you cannot logically use them without dismissing your atheism. You might want to challenge my arguments as unfair, but then you would be arguing on the basis of a moral structure to which your system gives no access. And even science cannot come to your rescue since it depends upon truth and reason under the guidance of morality. But even with all of this, we may have no power to stop your dissent since consistency has never been a part of your repertoire.

As I close, I ask that you recall the horizon line. True seeking requires that you do not limit yourself to the cramped valley of physicalism. Remember that the central issue is atheism against theism. Understand also that it is an artificial sham to pit evolution against creationism or an old earth against a young one. Discover the right key. Only theism is congruous with nature as we know and experience it. Atheism is consistent with nothing, including itself.

Here’s the final word: Either you must admit the fact of God or acknowledge that you have taken a completely baseless and, therefore, defenseless position.

You can purchase The Fatal Flaw here.