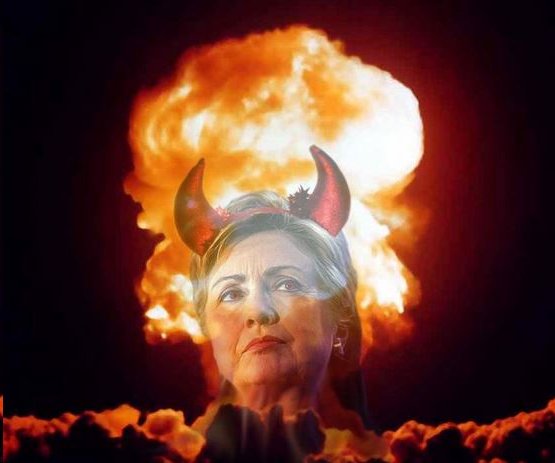 Donald Trump is a nearly perfect icon of carnality, an unspiritual man who can be reasonably seen as having spent his entire life striving with remarkable devotion and energy after the riches he cannot take with him when he dies (i.e., he bears the image of a fool), and flouting the divine laws which limit and control the pleasures he seeks in wealth and its indulgences, cynically using the laws God has set in the world, as well as his fellow human beings, for his own enlargement, so that the charge of narcissism leveled against him seems as reasonable as the conclusion that while he claims to be a Christian he is in fact only a Presbyterian.

Mrs. Clinton cannot be compared to Donald Trump simply as a person who will counter his more conservative policies with an opposing liberalism. She represents something dangerous to a geometrically higher degree than carnal depravity. America is in deep crisis, one of the signs of this being that its electors no longer enjoy the privilege of choosing between candidates who profess Christianity but have different ideas on how monies should be allocated or wars should be waged, but between carnal ambition and behavior on one hand, and on the other destruction of the created good of which Trump’s carnality is a mere perversion. Hillary operates in a far more spiritual sphere. Her familiars hate the incarnation of spirit in flesh (for they are pure spirit) pre-eminently the incarnation of God, and are intent on the degradation and destruction of the race in whom this image is found.

The new spiritual order, a form of religion itself, has better ways of defining human life, the family, and sexual being, better ways to define and administer justice, better ways to educate and better goals and materials for education, ever-improving ways to direct and control, for their own good, the lives of people who don’t share the opinions of those Thomas Sowell identifies as the self-congratulatory “anointed”–who consider themselves, despite their massive and continual failures in experimental manipulations of society, the best and brightest, the natural ruling class.

This class has well-planned ways, especially through its homosexual office, to rid the polis of the influence of uncooperative religion, and, along with this, to neutralize the danger represented by any society functioning independent of government control. During the Obama administration one has seen significant adumbrations of this party’s willingness to use its powers to oppress and suppress those it perceives as enemies of the religion of progressivism, looking as it does to the dawn of a new age of universal peace and prosperity, for which it does not hesitate, like every utopian tyranny, to break anything that gets in its way, truth being its greatest enemy and the necessary first victim of its ravages.

This is not only what may be expected from Hillary Clinton but is already operative in her and her colleagues in office, and to which her presidency will signal a further removal of restraint that will become most immediately evident in its control of a federal judiciary that operates according to party doctrine, and will for decades to come.  Her party and her office may be expected to continue reflecting a deep hatred of the human race, desire to make it at least as lawless and miserable as life in the cities it has for decades controlled, to break every rule of faith or honor that opposes them, to weaken the country’s moral and physical ability to resist destructive forces, to the end of exterminating the nation both spiritually and materially.

In this scheme of things the merely carnal man, the man of weak and desire-wracked flesh, is still a man and as such a threat to beings who despise incarnate spirits above all things. A man who simply runs things according to his appetites is better, even if he is very bad indeed, than someone who is controlled by not by flesh and blood, but spiritual rulers of this present darkness, who have already shown copious evidence of hating the human race through the Party of Abortion.  That is why I will vote for Donald Trump and hope for things that I could not reasonably hope for under Hillary Clinton.