You Never Were a Christian 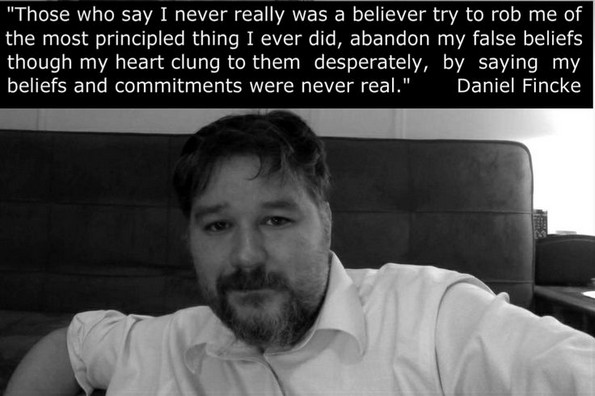 One of the ways that Evangelicals dismiss my life and current beliefs is to say that I never was a Christian, I was a false Christian, or I was Christian in name only.

I thought Christians have been given a spirit of discernment. I thought Christians are filled with Holy Spirit. I thought the Holy Spirit is their teacher and guide. I thought the Bible gives Christians everything they need to know concerning life and godliness. If these things are true, how is it then that NO ONE, not one single person, ever suggested that I was not a real Christian until I openly said I was an agnostic? I was part of the Christian church for fifty years. I preached my first sermon at age fifteen and for the next thirty-five years I was a committed, devoted follower of Jesus. I spent twenty-five years in the ministry, pastoring churches and helping thousands of people. I prayed, read and studied the Bible, witnessed, tithed, attended public worship services, and tried to pattern my life according to the teachings of the Bible and the life of Jesus. I sacrificed my life for the sake of the gospel. I willingly lived a life of self-denial, accepting poverty wages so churches could have a full time pastor. This was my life, yet according to some Christians, it was all a charade, a game, or the work of a man inspired by Satan and possessed by demons

A pastor on Facebook said that he could discern the true Christian from the false Christian. I replied that I did not believe he had any such gift. I told him my family and I could put on our Sunday best and come to his church and I could preach for his congregation and EVERYONE would think the Gerencsers are a wonderful Christian family. Perhaps my older children could come along with us and bring their guitars so we could lead the church in a divine, inspiring time of praise and worship. I bet people would even remark that they “felt” God’s presence and that the Gerencsers are a godly example of how a family should be.

I’ve been telling my story online for more than seven years. Uncounted Christians have told me that I never was a Christian. Some of these deniers were close friends and colleagues in the ministry. Why do they say I never was a Christian?  By saying this, they are able to ignore the glaring truth that they have no discernment and that the Holy Spirit did not warn them I was a sheep in wolf clothing. This also allows them to avoid the hard theological questions that arise when trying to square my life with their beliefs.

It’s easy to say, in hindsight, I never was a Christian. Why is it no one spotted my deception while I was their pastor? Was I just a great con artist, an Elmer Gantry? Think about this for a moment. For twenty-five years, I was able to successfully con seven churches, thousands of people, and dozens of colleagues in the ministry. Does anyone really think I could pull this off if I were not a Christian?

Here’s the truth, like it or not: I was a Christian and now I am not. I don’t care how you square this with your theology, you know and I know that I was a true-blue, washed-in-the-blood, sanctified, Holy-Ghost-filled, Bible-believing, sin-hating Christian. Jesus was my one and only, the passion and love of my life. I was willing to die for him if need be. If I wasn’t a Christian then nobody is.

I am sure someone will ask why this matters to me? If God doesn’t exist and the Bible is fairy tale, why should I care whether someone thinks I was a Christian? Imagine, for a moment, that you were a star baseball player in high school. At age eighteen, you were signed to a minor league contract by the New York Yankees. You worked your way through the Yankees minor league system, finally making it to the major leagues at age twenty-three. For the next fifteen years, you played outfield for the Yankees. At the age of thirty-eight you retired. Fast forward to age sixty. You are having a discussion with someone and they tell you that you never were a baseball player. You may have had a ball glove, a bat, and a uniform, but you never were a “real” baseball player! Would you be offended by this? Would it be OK for someone to dismiss your life on the baseball diamond? Of course not. The fact that you were a baseball player from the time you were a child to age thirty-eight was a very important and real experience for you. Tens of thousands of people KNOW you played baseball, yet there are a handful of deniers who are sure you never, ever played the game. While fans are certainly free to discuss and debate how good a player you were, how well you played the game, or if your play helped the Yankees win, but saying you never were a player is irrational.

Yet, this is exactly what some Christians do. They deny I was ever what I said I was. They take a knife to my life and cut huge portions of it away and toss it in the garbage. While this might help them avoid the hard questions my life requires them to answer, the evidence for me having once been a Christian is overwhelming, making their denial  ludicrous and irrational. I wonder if the real issue for deniers is that my shocking deconversion forces them to consider that they too could fall from grace, that they too could one day be numbered among the godless.