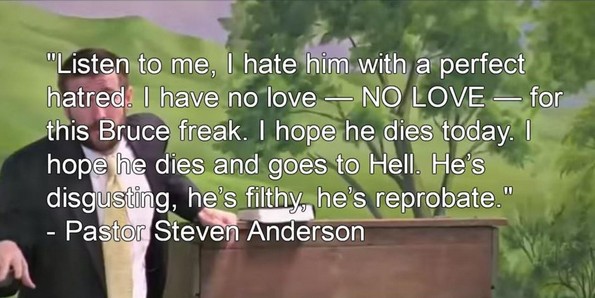 Steven Anderson, pastor of Faithful Word Baptist Church, Tempe Arizona, has a huge hard-on for Caitlyn Jenner. Well, I shouldn’t  say huge hard-on because Anderson is a small-minded, small dick narcissist who loves to say outlandish things so he can continue his five minutes of media fame. While I would love to say that Anderson is an outlier, his type can be found in every Evangelical sect. Anderson happens to hail from the Jack Hyles wing of  the Independent Fundamentalist Baptist church movement. He prides himself in being uneducated, as does his wife Zsuzsanna. If you have not read my post Understanding Steven Anderson, Pastor Faithful Word Baptist Church, Tempe, Arizona, I encourage you to do.

When I first read Anderson’s quote, I thought to myself, Anderson is upset at me. After all, when you do I Google Search for Pastor Steven Anderson, my post about him is usually in the top five to fifteen search results. The ranking varies depending on if the news media has done any reporting on Anderson.  Sadly, Anderson had BRUCE JENNER in mind, not Bruce Gerencser, even though, as one Facebook commenter said, “Don’t feel bad, Bruce. I’m sure he hates you, too!“