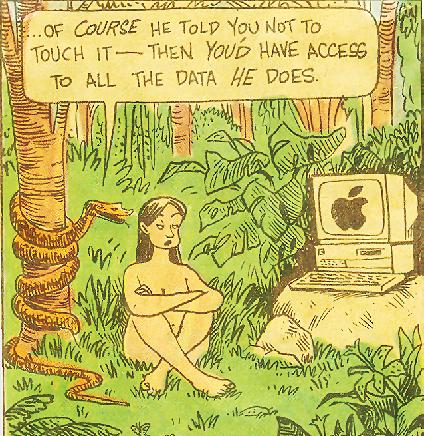 Several months back, I asked readers to submit questions they would like me to answer. If you would like to ask a question, please leave your question here.

I know you are probably going to slam me for asking this, but it really is something I have noticed time and time and time again across my nearly 63 years of life—and I am at a bit of a loss to understand it. So, here goes:

Why do Christian fundamentalists and conservative evangelicals believe that the sole purpose of communications media (books, magazines, newspapers, movies, television shows, blogs, etc.) is to “teach me how I should live my life” in this world. All of my semi-fundie aunts are dead now, but they grew up in rural Tennessee in the period 1910-1930. In later years, (1930s onward), they would scrape up enough money to go to a movie, and they would go with the apparent notion that Joan Crawford will today on the movie screen “teach me how I should live my life if I move to the city.”

Whenever a fundie wants to banish a book from the public library, ban a movie, or whatever, the excuse is always something along the lines of: “Well, I’m afraid this book (or this movie) is going to teach people wrong things about…”

I gotta be honest with you Bruce. I think these people are just plain nuts. For example, I saw a DVD of the movie “Lucy” recently. At no time did I insert it into the DVD player, kick back in my easy chair, and say, “Scarlett is gonna teach me how I should live my life with this movie.” If I pick up the newest Superman comic book, I never say, “Superman is going to teach me a lesson on how I should live my life.”

I am a professional anthropologist. Human culture and society are my business, but this one is a little hard to understand. On occasion, I have wondered if this is a uniquely American disease of the mind with religious roots. For example, when the first pioneers pushed westward across the Appalachian Mountains into Ohio, Kentucky, and Tennessee, the Bible was often the only book they owned. It was viewed as a book whose primary purpose was to “teach them how they should live their lives.” Historically, is it possible that they uncritically transferred this notion to every form of communications media that arrived on the scene?

Even nowadays, you can here fundies say, “I don’t like that short story because it does not teach a good moral lesson.” I just want to say back, “Well, maybe the author did not want to teach you a good moral lesson because he was just writing a story that he wanted to tell.”

What goes on in the minds of these people?

Here’s what I know for sure, the Christian fundamentalist operates from six presuppositions:

Because Evangelicals believe the Bible is the inspired, inerrant, infallible Word of God, it becomes the foundation for how they view the world and live their lives (in theory anyway). This thinking permeates every aspect of their lives. It is not uncommon for Evangelicals to label themselves as “people of the book.” The Bible becomes a written oracle that speaks infallibly pertaining to life and godliness. It becomes THE truth above all others. Throw in the notion that the Holy Spirit lives inside Evangelicals as their teacher and guide, and is it any surprise that Evangelicals think the way they do?

Everything in the Evangelicals’ lives is filtered through the pages of the Bible. When they see something in the media that lines up with their beliefs, this is viewed as God giving them a life lesson or reinforcing their beliefs. Since most Evangelicals think homosexuality is a sin, they can turn to Romans 1, 2 and see that their view of the world is going to hell in a hand basket is affirmed by the Bible and recent events such as the legalization of same-sex marriage and the persecution of Christian wedding cake bakers.

Evangelicals often equate the smallest of things to God. From finding their keys to discovering a $20 bill in a pair of pants, every unexpected “blessing” is a sure sign of the truthfulness of the Bible. These “God sightings” are proof that they are on the right track and that their beliefs are true. So, when a Tim Tebow or some other sports star praises Jesus, they see the star’s words as an affirmation of their beliefs. Same goes for utterances about God at the Grammy Awards, Country Music Awards, and other show-biz award shows. Never mind that many of the singers are praising God for songs that promote debauchery and sin. All that matters is that they thanked God or their Lord and Savior Jesus Christ. Woo Hoo! Another God sighting!!

Evangelicals are also obsessed with eschatology. Always on the lookout for Jesus coming to rapture them away, they look for signs of his soon return (even though they are commanded not to do so). Again, this kind of thinking leads them to “see” God and signs everywhere they look. From RFID chips being the mark of the beast to mathematical formulas that predict the exact date of the rapture, Evangelicals seek out “evidence” for their eschatological beliefs. In doing so, they overlook the obvious; first century Christian expected the second coming of Jesus in their lifetime, yet here we are 2,000 years later, no Jesus. Perhaps Jesus likes his digs in heaven and is not coming back or his body lies silent in an unmarked grave outside of Jerusalem.

Evangelicals also believe God speaks to them, either through the Bible or through the still small voice of the Holy Spirit. When a person has God speaking directly to him, it is possible to see almost anything as a lesson or message from God. Spend some time on the CHARISMA website and you will come away thinking that Evangelicalism is actually an insane asylum. No belief is so far-fetched that it cannot be attributed to God. Years ago, a woman stood up in one of the churches I pastored and told a story about God appearing to her. A devout Evangelical Christian, she said God came in the night and spoke to her. Wanting to make sure it was God and not the devil, she asked for a sign. All of a sudden, she saw a blue light and she knew it was God. I thought then, as I do now, that she was confusing a blue light special at K-Mart with a visitation from God. (Note also the number of Republican candidates for President who say the Christian God TOLD them to run.)

Throw all these things in a bag and shake them up and what you end up with is a Christian version of McCarthyism. Everywhere Evangelicals look they see their God. When they pray for Grandma and she gets better they think God did it. When God doesn’t answer their prayer and Grandma dies? It’s God’s will. Either way, everything traces back to God. He is the Alpha and Omega, the first and the last, the beginning and the end. 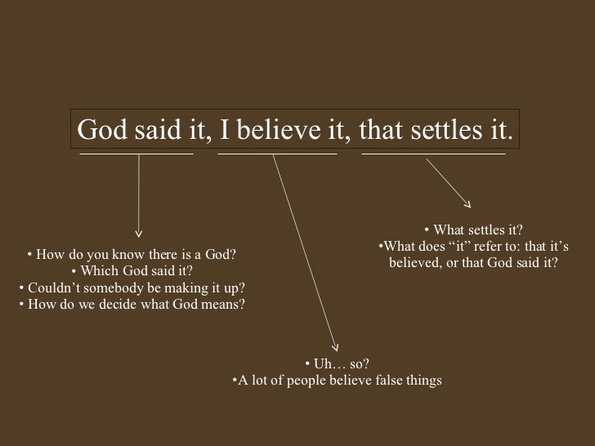 Understanding this explains why their thinking drives you nuts. As a man of science, you value evidence and facts. While you are still a believer, you do not check your brain at the door and ignorantly view the world as the Evangelical does. Evangelicals will likely say that they too value evidence and facts, but their evidence is the Bible, not what can be understood through reason, healthy skepticism, and the scientific method. When confronted with a challenge to their beliefs, the Bible and faith always win.

This is why I do not get into arguments and lengthy discussions with Evangelicals. The path always leads back to faith and THE BIBLE SAYS!  Once the Evangelical appeals to faith, there is no hope of a meaningful discussion. Just today, an Evangelical preacher “proved” to me that Jesus resurrected from the dead. How?  He quoted the Bible. In his mind, God said it and that settles it.