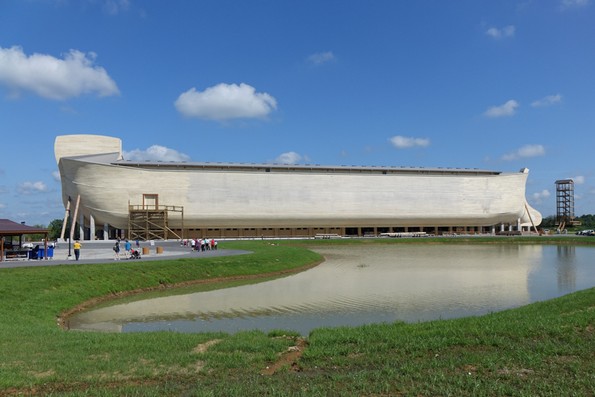 The July 31, 2016 edition of the Defiance Crescent-News featured a Letter to the Editor by local Fundamentalist Jack Fetter objecting to my recent letter about Ken Ham’s Ark Encounter. You can read my letter here. Several weeks prior to his Letter to the Editor, Fetter was featured in a puff piece extolling the wonders of Ham’s latest monument to human ignorance — the Ark Encounter. Fetter is quoted as saying (article behind Crescent-News paywall):

They (Answers in Genesis) want people to experience the most authentic reconstruction of Noah’s Ark, with ‘authentic’ being the key word. They really want people to see what life was like in Noah’s day, to get answers about the great flood and to learn that the one door on the ark represents the one and only way to God is through His Son, Jesus Christ. God hates sin, and it was at this point in history that mankind had become so rebellious, that God needed to start over again.

God is a forgiving God, but at the end, there will be judgment. We’re all going to face the Lord one day, and this project is a great reminder of what God did by sending His Son, Jesus, to earth to die for the sins of mankind. They pray this will be a life-changing experience where many will desire to have a personal relationship with Christ and serve Him.

Crescent-News religion writer, Tim McDonough, made no attempt to ask Fetter — a man who spent 42 years working for Youth for Christ — hard questions about his assertions or worldview. You know, questions about the absurdity of building a monument to events that never took place or questions about how geology, archeology, cosmology, and biology thoroughly discredit claims of a universal flood 4,000 or so years ago. Ham’s and Fetter’s irrational Fundamentalist interpretations of Genesis are littered with absurdities, yet the Crescent-News writer allowed their claims to go unchallenged. At the very least, McDonough should have interviewed any of a number local mainline pastors/priests, academics, or scientists who would have presented opposition to Fetter’s literalism. I realize that McDonough’s article was on the Friday religion page, but, my God, sir, think of the children! Surely, poking the Fundamentalist bear a bit won’t cause people to cancel their newspaper subscriptions. But then, maybe it would. Having spent the past eight years drawing the ire and hatred of local Bible-thumpers, I suspect a religious news article challenging the veracity of the flood myth would result in numerous locals throwing conniption fits.

Sunday’s paper — letters to the editor are published on Wednesdays and Sundays — featured the following from Fetter (behind Crescent-News paywall):

A recent letter to the editor on July 20 entitled, “Creation museum draws questions” had an absolute opposite effect on my life. The museum is an awesome experience that answers and defends the Word of God.

Another comment was that evangelicals bore easily and few return once they tour the Creation Museum and Ark.

First of all, all Christian growth is not boring. The most purposeful life both here and in eternity is to love and serve Jesus Christ. I have visited the Creation Museum over 30 times and have found the museum to be a treasure chest of biblical truths that will help me deepen and defend my faith. Besides the museum my biggest resource is the huge amount of creation material that can be taken home to study.

People return because even with a two-day pass it can’t be covered, especially if you do the shows, workshops,, planetarium, petting zoo, etc. There’s so much to do that I don’t have the space to share. Most repeaters bring guests and then the guests bring new people to experience the museum. This is the reason revenues have finished in the black every year at the Creation Museum.

It was indicated the Ark was built on speculation. Genesis 6:15 states the exact dimensions of the Ark and that is exactly the measurements of the Ark Encounter. It was also mentioned that it would be doubtful if the Ark would safely float. That is a non-issue because God promised there would never be another judgment by a flood. The rainbow is that reminder. However, there will be another judgment from God in the form of fire.

Fetter’s letter is typical of those written in response to my attacks on Evangelical Christianity, Bible literalism, and scientific ignorance. You can read all of them here.  Fetter, now in his seventies, will likely die believing that the words of the Christian Bible are literally the words of God. Having invested his life in promoting Biblical literalism and scientific ignorance, Fetter has traveled too far to turn back now. Convinced that Ken Ham’s wood boat (along with the Creation Museum) will be used by God to save the lost and rebuke the wicked, Fetter has traveled over thirty times to Kentucky to view the “wonders” found within Ark Encounter and the Creation Museum. While Fetter is free to spend his remaining years of life amongst the wonders of bronze age sheepherders, I plan to spend my time making sure that another generation of American children and young adults are not intellectually crippled by Bible nonsense.

Fetter is right about one thing: the difference between him and me is one of clashing worldviews. While I would, if given the opportunity, challenge the idea that Christianity and the Bible are something other than human words and beliefs, I readily admit that the worldviews of Jack Fetter and Bruce Gerencser are poles apart. Fetter begins with faith, believing with great certainty that the Bible is a supernatural book, with a supernatural message, written by a supernatural God. Its words are inerrant, infallible, and true. I, on the other hand, begin with skepticism and reason, both of which insurmountably challenge Fetter’s system of belief. While I am certain Fetter is a decent human being, I certainly don’t want to see local school children exposed to creationism or its gussied-up sister, intelligent design. Both are theological presuppositionalist dogma masquerading as evidence-based science. If Fundamentalists such as Fetter want public school children taught creationist myths, they should be covered in comparative or world religion classes. Doing so would show students that Fetter’s flood/ark myth is just one of many that can be found among earth’s religions. Of course, Fetter and Ham want nothing of the kind. They know that exposing students to a broad spectrum of mythical religious beliefs will destroy Evangelical Christianity and its false, one-true-religion narrative. Study one religion, and you’ll be hooked for life. Study two religions, and you’re done in an hour, atheists, agnostics, and skeptics say. Rational inquiry and intellectual freedom have always been the enemy of faith.

Fetter and I are on opposing fields of battle. Fetter believes that faith in God and the teachings of the Bible will win the day, whereas I believe that skepticism and reason will one day conquer religious ignorance. Our battle is far from over, but, in time intellectual inquiry and freedom will defeat religious certainty and ignorance. I am hopeful that one day history will record that Ark Encounter and whatever other Biblical monuments Ham might erect are considered relics from a day when people naïvely believed the Christian God ruled the universe. The way forward is paved by reason, rationality, skepticism, and scientific inquiry. To reach such a place, those of us who value these things must be willing to wage war against the Jack Fetters and Ken Hams of the world. The future of the human race hangs in the balance (most anti-climate change, anti-global warming thinking is driven by religious belief). We must never waver in our defense of open, rational inquiry. Our enemy is tiring. In another generation/century or two the answer to the question, Is God Dead? will be met with a resounding reply of Yes! Until that day, we must continue to push back every attempt by Fundamentalists to bow the peoples of earth to their worldview.