Bob the Baptist Says: I Don’t Interpret the Bible, I Just Read It and Believe What it Says 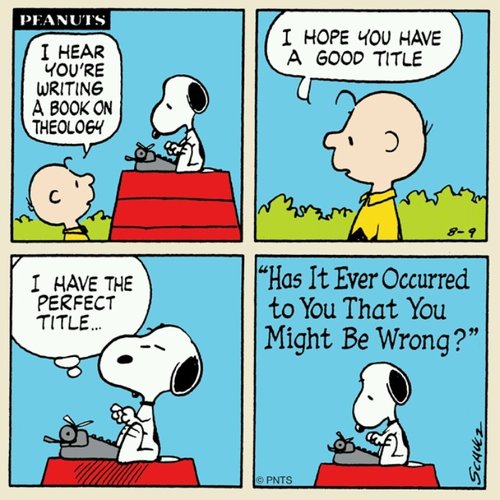 Countless Evangelicals claim they believe that every word of their inspired, inerrant Bible is absolutely true. In their minds, every word in the sixty-six books of the Protestant Bible is straight from the mouth of God. Thus, when they read the Bible, there’s no need to interpret it. God said it and they believe it! End of discussion.

If this notion is true, why, then, do Evangelical believers have such differing beliefs? Not only do their beliefs conflict with those of non-Evangelical Christians, their “infallible” beliefs are often at odds with the beliefs of their fellow Evangelicals. If there is ONE Lord, ONE Faith, and ONE Baptism, and all believers have God, the Holy Spirit, living inside of them acting as their teacher and guide, why all the differing beliefs? If all one needs to do is to read the Bible to find God’s truth, why do Christians hold a cornucopia of contradictory beliefs?

Suppose, for a minute, that a person living on an island came upon a copy of the Bible. This man has never been exposed to Christianity. He has never heard about the Christian God, Jesus, the Holy Spirit. Would this man naturally come to the same beliefs as Evangelicals? Surely, if all one needs to do is read the wonderful, matchless Holy King James Bible to find God’s truth, shouldn’t this man come to the same conclusions as a Bible college-trained Evangelical preacher?

The fact is, the moment a person starts reading the Bible, he is interpreting the text. There’s no such thing as just reading and believing. The mind of every Bible reader is conditioned by the religious beliefs held by his culture, family, and church. So, when he reads the Bible, he is filtering its words through the beliefs, teachings, dogma, and interpretations of others. There’s no such thing as naked truth, especially when it comes to the Bible. Its text has been interpreted and reinterpreted for thousands of years. What one generation of Christians believed is often not what a different generation believed. Evangelical preachers love to think that their churches are just like the churches of first century Christians. These promulgators of ignorance believe that First Baptist Church in Podunk, Mississippi is exactly the same as the churches founded by the apostles two thousand years ago. To the uninitiated, this kind of thinking sounds absurd, but having grown up in Independent Fundamentalist Baptist (IFB) churches, I can tell you that such thinking is common. IFB preachers love to think that their churches are “old-fashioned” congregations. In their minds, “old-fashioned” means their churches are patterned after early New Testament churches. What it really means, however, is that their churches are like congregations were in the 1950s.

Here’s the truth: God’s “truth” is actually man’s interpretation of an ancient religious text. Beliefs are, at best, educated opinions. At worst, beliefs are opinions of poorly educated dunces who think of themselves more highly than they ought. I am at the place where, when a Fundamentalist Christian says to me, THE BIBLE SAYS _________, my response is, So what? All you are doing is expressing your opinion.

This is why the best way to engage Evangelicals is to attack the nature of the Biblical text itself. When Evangelicals speak authoritatively, their foundation is not as strong as they think it is. This is why they need a plethora of presuppositions to prop up their house of cards. The Bible is God’s Word, Evangelicals say, because the Bible says it is. The Evangelical deity is the one true God because the Bible says he, he, and he is. The Evangelical God created the universe 6,023 years ago because the Bible says he did. Humans are sinners by nature because the Bible says they are. All these “truths” are KNOWN by unbelievers, so there is no need to prove them. Atheists and their ilk live in denial of these “truths.” In fact, there’s no such thing as an atheist because everyone KNOWS the Evangelical God is the one true God. Atheists suppress what they know to be true, or so the thinking goes anyway. The only way to effectively reach Evangelicals, then, is to challenge their infallible interpretations of the Bible. We must become like the Devil in Genesis when he said to Adam and Eve, Yea, hath God said? Are you sure God said what you believe he said, Baptist Bob? Once doubt is sown in their minds, then, and only then, are they ready to critically examine the Biblical text.