Why Evangelical Christianity is Dying

Evangelicalism is dying. Oh, Evangelicals still make lots of noise and have a stranglehold on the Republican Party, but their grip on America is weakening and, in time, their hold will falter, leading to epic collapse. The Week reports:

This won’t happen any time soon, but that train is a coming, and nothing can stop it. Younger Evangelicals, in particular, are exiting their churches stage left, never to return. Those who remain tend to be more liberal politically, socially, and theologically, than their parents and grandparents. These cradle Evangelicals will, in time, seek out the friendlier confines of Liberal/Progressive Christianity. The late Rachel Evans is a good example of an Evangelical who tried to change things from within, but failing to do so, left the church of her youth and became an Episcopalian. 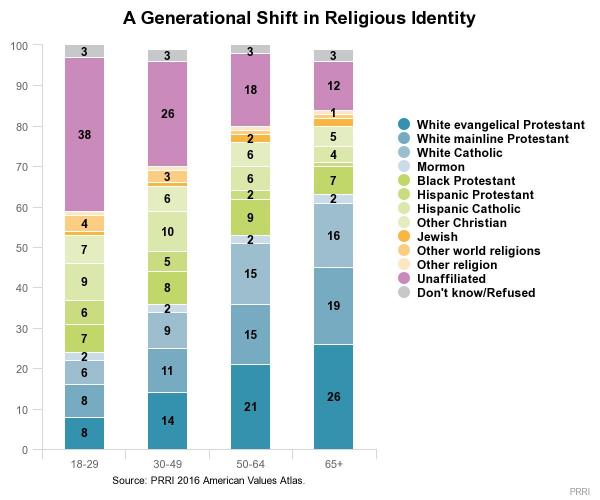 What drives the slow death of Evangelical Christianity?

Evangelical hatred for LGBTQ people is well-known. See an anti-LGBTQ bill and you will find Evangelicals lurking in the shadows. Older Evangelicals lived in a world where homosexuals stayed in the closet where they belonged. Younger Evangelicals have LGBTQ friends. Exposure to people who are different from them makes it hard for them to condemn people to Hell for being “different.” The more that Evangelical young adults read, travel, and attend secular universities, the more likely it is that they will abandon the Evangelicalism of their childhoods.

American Evangelicals generally support the anti-immigration policies of Donald Trump and the Republican Party. Older Evangelicals tend to live in white monocultures where exposure to non-white people is limited or non-existent. Younger Evangelicals are more likely to know and be friends with people of color. Again, exposure to people different from them forces younger Evangelicals to question the racist beliefs of their parents and grandparents.

Most Evangelicals believe God created the universe in six twenty-four-hour days. Older Evangelicals are more likely to believe Genesis 1-3 is the de facto scientific explanation for how the universe came into existence. Younger Evangelicals, exposed to non-religious science curriculua, are less likely believe the old Evangelical canard: God Did It! They know the universe is billions of years old, and that evolution best explains the natural world. The more science training young Evangelicals receive, the more likely it is that they will cast aside creationism and its gussied-up cousin, intelligent design.

Evangelicalism is front and center in the global climate change debate. Older Evangelicals, in particular, often believe climate change/global warming is a myth or something not to worry about because God is on the job. Younger Evangelicals see firsthand what violent storms, floods, melting ice caps, and rising temperatures are doing to their planet. They are angered by the “que sera, sera” approach to life of older Evangelicals; tired of “I’m going to die soon” or “the rapture is imminent” indifference from their parents, grandparents, and older church members.

Evangelical Insistence that the Bible is Inerrant

Evangelicals traditionally believe the Bible is the inspired, inerrant, infallible Word of God. Most older Evangelicals believe their Bibles are they very words of God. Many younger Evangelicals, however, have serious questions and doubts about the nature of the Biblical text. The non-answers they receive from their churches/pastors don’t measure up to their expectations. And when questions go unanswered, young Evangelicals turn to the Internet for answers, finding evidence that their pastors, parents, and Sunday school teachers are lying about the Bible These seekers wonder, “what else are our pastors lying about?”

In 2016, eighty-one percent of voting white Evangelicals voted for Donald Trump. Without their votes, Hillary Clinton would have won the election. Younger Evangelicals tended to vote for liberal/progressive candidates, candidates that better reflected their worldview. Record numbers of young Evangelicals voted for Bernie Sanders in 2016 and Barack Obama in 2008 and 2012. Younger Evangelicals see that their pastors, parents, and grandparents were willing to sacrifice moral principles to gain political power, and it disgusts them. In 2020, the party that captures this voting bloc will win the election.

They are increasingly concluding that Evangelicalism is irredeemable, so they leave. I fully expect this exodus to increase, leading to the eventual death of Evangelical Christianity.