Evangelical Twitterer Says God is Losing Patience with Me 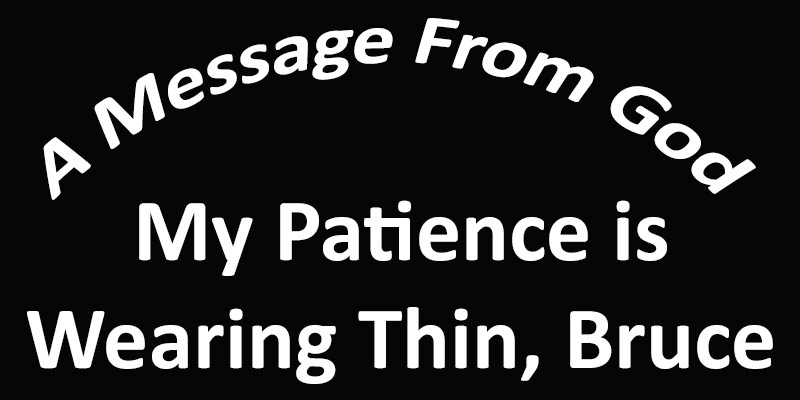 Warning! Bucket loads of snark ahead.

Recently, I engaged in a short-lived Twitter discussion with an Evangelical man going by the handle atheismbut. His goal, I believe, was to sling lies, half-truths, and religious clichés at atheists. I am not sure what he hoped to accomplish by doing so, but I decided to play his game for a bit. After failing to drag me into a mud-fight, this man unfollowed me. He then refollowed me, and a day or so later unfollowed me again. He has now blocked me, so I am unable to see his tweets, respond to him, or notify him of this post.

This man doesn’t use his real name on Twitter, choosing instead to list his name as Atheism Be Damned. Catchy, right? sigh After unfollowing me the first time, this man sent me a direct message (DM). I had in our Twitter conversations called the man an apologist and a zealot, both of which offended him. His DM, however, only proved that my assessment of him was spot-on. Here’s what he had to say:

I’ll take this offline. I say what God directs. See, I absolutely do not care what people think of me, say about me or say to me. What I truly care about is what My Lord sees of me. His good and perfect will is what I care about. Here’s His word to you: (I have given you the time you sought. I have been patient. I have stood near all this time. I have not abandoned you. My patience wears thin son. The time has come to choose. Return to the anointing I have placed on you and fulfill the call or forfeit your inheritance. I wait no more.)

Bruce…as your brother created in His image…please stop what you are doing. Repent of your apostasy and declare your faith in Him for all to witness. Your 25 years of faithful service only counts if you reclaim it. Do not allow the enemy to steal what God has given to and through you. Sto [sic] listening to the lies of the world. There is no true wisdom in the fallen ones [sic] domain. Anyhow, that’s it. It’s on you sir. Your call. I pray and hope you make the right decision.

As is common among zealots, they believe that God speaks directly to them. This man certainly did, telling me that he just says what God tells him to say. And how can any of us know this to be? ‘Cuz he says so. He says that he doesn’t care what people think or say about him, yet for no good reason, he unfollowed me twice and blocked me. Evidently, he DOES care about what people say about him.

Supposedly, this man’s God gave him a message he wanted to be delivered to me. Here’s what it said:

I have given you the time you sought. I have been patient. I have stood near all this time. I have not abandoned you. My patience wears thin son. The time has come to choose. Return to the anointing I have placed on you and fulfill the call or forfeit your inheritance. I wait no more.

First, why didn’t God deliver this message herself, instead of using a middleman? Have you noticed that God always uses middlemen to deliver his missives; that he never, ever speaks directly to the unwashed, uncircumcised Philistines of the world? Come on God, just send me an email or a text message.

Second, I didn’t ask God for time to consider my past/present/future life. God and I have not spoken to one another since November 2008. Since then, I have concluded that the God I thought I was speaking to for fifty years was just a voice in my head; that I was the God I was speaking to.

Third, if God was standing nearby, I never saw him. This leads me to believe that Atheism Be Damned is seeing things — a common Evangelical malady. The only place this man’s God can be found is within the pages of the Bible — a bestselling storybook. Jesus said, seek and ye shall find. Sorry, Jesus, but everywhere I look you, are nowhere to be found. Perhaps Jesus is much like Baal in 1 Kings 18: 25-29:

And Elijah said unto the prophets of Baal, Choose you one bullock for yourselves, and dress it first; for ye are many; and call on the name of your gods, but put no fire under. And they took the bullock which was given them, and they dressed it, and called on the name of Baal from morning even until noon, saying, O Baal, hear us. But there was no voice, nor any that answered. And they leaped upon the altar which was made. And it came to pass at noon, that Elijah mocked them, and said, Cry aloud: for he is a god; either he is talking, or he is pursuing, or he is in a journey, or peradventure he sleepeth, and must be awaked. And they cried aloud, and cut themselves after their manner with knives and lancets, till the blood gushed out upon them. And it came to pass, when midday was past, and they prophesied until the time of the offering of the evening sacrifice, that there was neither voice, nor any to answer, nor any that regarded.

The prophet Elijah mocked the prophets of Baal saying: Cry aloud: for he [Baal] is a god; either he is talking, or he is pursuing, or he is in a journey, or peradventure he sleepeth, and must be awaked. In modern English, Elijah mocked Baal’s non-appearance, saying” perhaps Baal is busy talking to someone else, taking a shit, on vacation, or sleeping. Elijah, of course, was right about Baal, but these same words aptly describe the non-existence of the Christian God too.

Fourth, Atheism Be Damned warns me that God is running out of patience with me; that he’s tired of me not listening to the Baalam’s donkeys he has sent my way. (Numbers 22:21-39) Again, if God is upset with me, he knows where I live. No need for Atheism Be Damned to deliver a message that God is supposedly capable of delivering himself.

Sixth, Atheism Be Damned claims some sort of familial connection with me — spiritually, I suspect. Sorry, but I have no interest in having such a relationship. I am quite content being a part of the fallen one’s family. That’s Satan/the Devil/Lucifer/Beelzebub for you unaware of Evangelicalese. If given a choice of spending eternity with the Atheism be Damneds of the world or spending eternity in Hell with Christopher Hitchens and my dear friend Steve Gupton, along with my wife, children, and the fine folks who frequent this blog, give me HELL every time. Sorry, but there’s nothing appealing about kneeling as if giving a blow job before God and worshiping for all eternity. Imagine how much fun Hell will be compared to the Evangelical Heaven. Who in their right mind, save those who have been scared with fear and threats of judgment, would want to spend every day and night for a million years singing praises to a narcissistic deity? No thanks. Bring on the whiskey, beer, and cigars, and let’s have a rip-roaring time fishing the Lake of Fire.

Finally, Atheism Be Damned says, he has said all that God intended for him to say, and now, it’s up to me to choose between the Evangelical God and reality. He signs off by saying, “I pray and hope you make the right decision.” I thought it was God who saved sinners? I thought that salvation depended on God giving sinners ears to hear and eyes to see. I tried to tell Atheism Be Damned that I was an apostate and a reprobate. I even quoted Bible verses from Romans 1 and Hebrews 6, proving that I am beyond hope; beyond the saving grace of God. Hebrews 6:4-6 says:

For it is impossible for those who were once enlightened, and have tasted of the heavenly gift, and were made partakers of the Holy Ghost, And have tasted the good word of God, and the powers of the world to come, If they shall fall away, to renew them again unto repentance; seeing they crucify to themselves the Son of God afresh, and put him to an open shame.

I was once enlightened, having tasted of the heavenly gift and having been made a partaker of the Holy Ghost for over thirty-five years. I had tasted the good word of God and the powers of the world to come, yet in November 2008, I fell away, renouncing Jesus and Christianity. Thus, according to the inspired, inerrant, infallible Word of God, it is IMPOSSIBLE to renew me again unto repentance.

Of how much sorer punishment, suppose ye, shall he be thought worthy, who hath trodden under foot the Son of God, and hath counted the blood of the covenant, wherewith he was sanctified, an unholy thing, and hath done despite unto the Spirit of grace?

Evidently, I believe the Bible more than Atheism Be Damned does. I am sure zealots shudder at my impudent treatment of their God and the Bible. However, I am not a believer, nor shall I ever be. The believing, preaching days are long gone. I have no intention of returning to slavery, to the fish, cucumbers, melons, leeks, onions, and garlic of Egypt (Numbers 11) . I have found the Promised Land. Its streets are paved with reason and freedom, and an endless buffet feeds my every intellectual want and need. Why in the world would I ever want to become a Christian again?