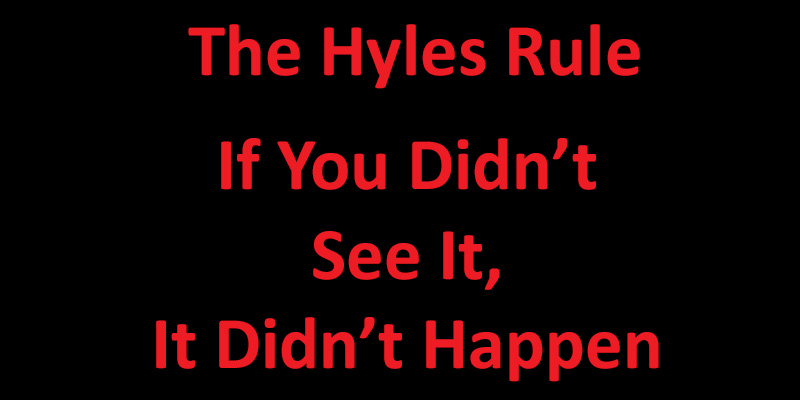 Bob Gray, Sr. is the retired pastor of the Longview Baptist Temple in Longview, Texas. Gray has spent his clerical career defending and standing behind men accused of all sorts crimes, malfeasance, and inappropriate conduct. One need only look at Gray’s resolute support of adulterer Jack Hyles (Please read The Legacy of Jack Hyles and The Scandalous Life of Jack Hyles and Why it Still Matters.) and his sexual predator son David Hyles (UPDATED: Serial Adulterer David Hyles Has Been Restored and Is All Forgiven for David Hyles?) Gray, a graduate of Hyles-Anderson College, believes, as did his god Jack Hyles, that if you didn’t see something, it didn’t happen. (Please read If You Didn’t See It, It Didn’t Happen and Sexual Abuse and the Jack Hyles Rule: If You Didn’t See It, It Didn’t Happen.) In his mind, unless there are two or more witnesses to Pastor Johnny fucking his secretary at the Motel 6 or Youth Pastor Billy Joe having sex with a church teen in his office, then they are innocent of all charges.

Today, Gray took to his blog to defend Catholic Brett Kavanaugh of all charges. I find it hilarious that Gray — who hates Roman Catholicism as only a Baptist can — is defending Kavanaugh. Much like the “liberal” Evangelicals he condemns, Gray has sold his soul for a mess of political pottage. All that matters to Gray is that Republicans continue to control the government and that right-wingers dominate the U.S. Supreme Court. Why? Abortion. It’s always about abortion. That, and those damn queers who dared to come out of the closet and demand equal justice and protection under the law. Gray, as a man, has been reduced to being a shill for the Republican party, a man willing to defend all sorts of vile behavior if, in doing so, the desired political objective is gained.

According to Gray, all these women hurling accusations against Kavanaugh, President Trump, and countless other men, are a sign of the coming end of the world. Gray writes:

In recent days we have seen those who oppose Christian values use a very potent weapon against those who stand for what is right. It is a weapon that has been used since the beginning of time. It is a weapon Satan mastered and taught throughout the ages. It was first used in the garden of Eden against God. It has continued to be used throughout history. The Bible tells us that a sign of the times is the increase of the use of this weapon. What is the weapon you ask? It is a powerful weapon of accusation.

In our political arenas we have watched as the liberals have used accusation over and over again in an attempt to discredit an individual with whom they disagree. In recent days we have seen it used against politicians, Supreme Court nominees, and others who stand for conservative principles. Unfortunately we have also seen it used among preachers and Christians. Many an individual has been damaged permanently by an accusation that has been made against them. Political contests have been determined by accusation which were made. Nominees for positions in the president’s cabinet have been altered because of accusation. Accusation can literally alter the course of history.

In the Garden of Eden Satan began his attack on God by accusing him of not telling the complete truth. Joseph was placed into prison and stripped of his position because of an accusation. Our Saviour was hung on the cross to be crucified because of those who accused Him.

Gray goes on to list nine things Christians should do when hearing of accusations against someone:

Please follow that statement carefully. Accusation must always be accompanied by several things.

It must be given to the proper person. When we accuse someone publicly we are not looking for justice as much as we are looking to influence opinion. A public accusation does not fix a problem. A public accusation creates a problem because it changes public opinion without justice being carried out. We must only accuse to the proper authority or person who is responsible for finding truth behind the accusation.

2. Accusation should not be assumed as true.

There was a day when we all believed that a person was innocent until proven guilty. We are now living in a society where guilt is assumed until innocence is proven. A person’s reputation is destroyed because we assume them to be guilty based upon what seems to be a credible accusation. In some cases we assume it to be true even if the evidence is by an unreliable witness. We seem to like assuming guilt. It is wrong to accept accusation as truth.

3. The accuser should be on trial as much as the accused.

A person who makes a public accusation almost always has an ulterior motive. It is foolish to believe that someone who would use accusation to destroy a person’s reputation should be trusted.

5. We should not allow a person’s reputation to be changed by accusation.

Someone who has done much good is accused and suddenly we think bad of them. We don’t know the facts. We don’t know the reason they were accused. We know nothing other than what we have heard. To change our opinion of the one being accused merely because there is an accusation made is foolhardy.

6. Do not be the judge or the jury when you hear of an accusation made.

In fact, don’t be the private investigator either. May I just simply put it this way? Mind your own business. If it’s not your business to carry out justice then keep your nose out of it. You are doing no one a favor by deciding that you are going to be the one who investigates the person who has been accused. Do not make a judgment unless it is your area of judgment.

This is not popular, but it is the right thing to do. A person who has been accused should be defended until they have been proven guilty. Tragically we are cowards when it comes to this. Someone with whom we have had a friendship with for years is accused and we get as far away from them as we can to protect ourselves. What a cowardly way to behave. Stand by your friends when they are accused. I would rather be wrong in defending an accused friend, than to be right in having attack them before knowing the truth.

8. Apply Philippians 4:8 to all accusation.

If you spread accusation you are as guilty as Satan of accusing one of your brethren. Satan is the accuser…not just the false accuser. He is the accuser of the brethren.

10. Identify yourself with the accused.

Well, there’s a load of bullshit. Is it any wonder, given Gray’s ten rules, that he repeatedly has defended adulterers, child molesters, pedophiles, and even murderers? Why, Jesus was falsely accused and so are good men who are having their lives ruined by accusations of sexual misconduct. I wonder what Gray thinks of pussy-grabber-in-chief, Donald Trump’s “alleged” rapes, sexual assaults, and adulteries. Just an innocent man falsely accused by women who want to destroy God’s chosen ruler?

Men such as Bob Gray, Sr. disgust me. His words reveal that he knows nothing about sexual assault and the sheer bravery required of women for them to go public with their accusations. And he sure as hell doesn’t know or doesn’t WANT to know, that very few of these allegations are later proven to be false. In other words, Bobby, you ought to be standing with these women. Instead, you defend and support their abusers and attackers. Shame on you for doing so.