Christian Patriarchy: Should Wives Obey Their Husbands No Matter What? 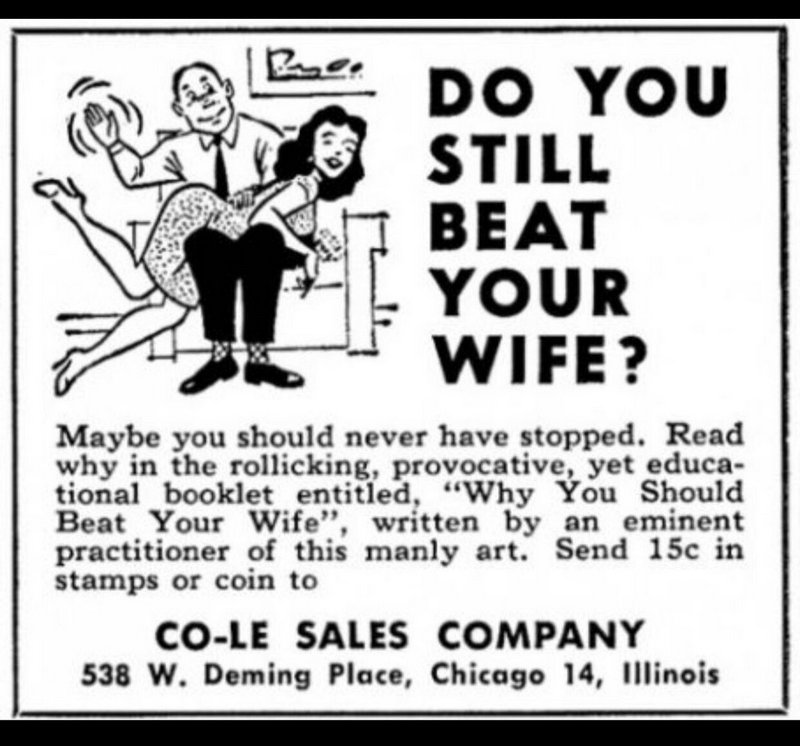 According to Evangelical complementarianism, husbands are their head of their homes. Wives are to submit to their husbands in all things. If husbands ask their wives to do something they think is wrong or they don’t want to do, wives should obey their masters’ commands anyway. Come judgment day, complementarians say, God will judge husbands and they will have to give an account for commanding their wives to do wrong. Most complementarians have two caveats of sorts: no, you don’t have to allow your husband to beat you, and no, you are not obligated to so anything that is “sin.” Outside of these two exceptions, wives are expected to woman-up and do exactly what their husbands tell them the to do. Take the issue of sex. Tired after caring for six children, cooking meals, cleaning the house, washing three million dirty cloth diapers, ironing your husband’s underwear, and making soap for your home-based business? Tough shit. When husbands want sex, wives are expected to give it to them — even during their periods — on demand. Simply put, wives are children with whom husbands can have sex. In every other way, there’s little difference between how wives are treated and how children are treated.

God commands that wives submit to their husbands in everything. No, they don’t submit to physical abuse or if their husbands ask them to do something evil but in everything else, yes, they submit. Some wives believe that injecting their children with vaccinations is evil but in this case, I believe they must submit. The Bible doesn’t say that vaccinating children is evil. Yes, abortion is evil and if, in fact, it is found out that most vaccinations are indeed filled with aborted fetuses, then they may have a case but as I stated, there is no way that they can prevent their husbands from vaccinating their children without causing much harm to their marriage. Children NEED a father and a mother. Children need their mothers loving their fathers. They don’t need conflict and chaos in their homes. They need a home filled with peace and love. This is much more likely to happen when the wife is obeying the Lord and her husband.

When a wife is living in loving submission to her husband on a continual basis, her husband will be much more willing to listen to her appeals. If she has researched vaccinations and feels strongly against them, she can share these with him after praying. Then she must give it to the Lord and live by faith instead of by fear.

Now, the husband in Alexander’s story wants to do what’s best for his children. Alexander, I believe, is an anti-vaxxer. What she is saying here is that wives should refrain from doing right by their children if their husbands ask them to do something that might harm them. And believe me, not getting vaccinations harms not only children, but society at large. The general principle is this: Wives are to do whatever their husbands command them to do as long they are not physically assaulting them or asking them to do something “evil.” Since the Bible doesn’t mention vaccinating children, wives should have their children vaccinated even if they think it may harm them. After all, God is in charge and he will protect them, right?

Anyone with an ounce of critical thinking can discern that this kind of thinking is psychologically and physically harmful, and could even cause death. Wives are turned into lemmings who can’t think for themselves. If I asked my wife what is the biggest “hangover” from our Evangelical days, she would say, “my hesitancy to make my own decisions.” We are more than a decade removed from our complementarian days, yet we still struggle with what I call the vestigial beliefs from our past. As much as we have tried to change our thinking, Polly and I still, at times, revert to our old ways. We are a long way from where we were, but fifty years of complementarian indoctrination will not be undone overnight. It takes time.

I have talked to my counselor many times about this — my frustration with our inability to move towards a more egalitarian marriage. “Well, Bruce, you like making decisions, and maybe Polly likes you making them,” he told me. I suspect he is right. I know I DO like making decisions. I am quite capable of making snap decisions, of being able to quickly size up a matter and decide accordingly. After forty years of marriage to me, Polly likes that I can do this, if for no other reason than that I am to blame if a decision has a bad outcome. Of course, I think it is important Polly think for herself and make her own decisions. This means that I often refrain from making decisions on her behalf, reminding her that she doesn’t need my permission to do something/buy something.

We remain a work in progress. Polly now has a supervisory position at her place of employment. Having this job has forced her to make decisions and be accountable for them. I remember her coming home filled with grief, telling about someone getting upset with her over a decision she made. I laughed, and said, “Welcome to making decisions. Every decision you make has the possibility of pissing someone off.”

The Lori Alexanders of the world want to keep women enslaved. “As long as your husbands don’t beat your ass or ask you to rob a bank, shut the fuck up and do what they say!” Crude? Yes, but this is exactly what Alexander is saying. Worse yet, some Evangelical preachers believe that wives should stay with their husbands even if they beat them — especially if they are unsaved. Why? The Bible says:

Likewise, ye wives, be in subjection to your own husbands; that, if any obey not the word, they also may without the word be won by the conversation of the wives; While they behold your chaste conversation coupled with fear. Whose adorning let it not be that outward adorning of plaiting the hair, and of wearing of gold, or of putting on of apparel; But let it be the hidden man of the heart, in that which is not corruptible, even the ornament of a meek and quiet spirit, which is in the sight of God of great price. (1 Peter 3:1-4)

In the 1980s, the church I was pastoring at the time joined together with other Independent Fundamentalist Baptist (IFB) and Bible churches to hold a crusade (revival) in Newark, Ohio. Jim Dennis, my wife’s uncle and the pastor of the Newark Baptist Temple in Heath, Ohio, was the chairman of the crusade. Pete (or it might have been Bill) Rice of Sword of the Lord/Bill Rice Ranch fame was brought in to be the speaker for the crusade. Several days into the meeting, Rice preached on marriage. Now, I knew he held to a “no divorce” position, so I knew we would disagree on that point. However, I was shocked when he said that Christian wives who were being beaten by their unsaved husbands should consider staying in their homes. Since being beaten by your husband is NOT, according to Rice, grounds for divorce, might it not be better for wives to endure the beatings and, through their godly testimonies win their husbands to Christ? Granted, Rice believed it was okay for wives to separate from their abusive husbands. He had to make such a grudging allowance due to what the Apostle Paul said in 1 Corinthians 7:

But if they cannot contain, let them marry: for it is better to marry than to burn. And unto the married I command, yet not I, but the Lord, Let not the wife depart from her husband: But and if she depart, let her remain unmarried or be reconciled to her husband: and let not the husband put away his wife. But to the rest speak I, not the Lord: If any brother hath a wife that believeth not, and she be pleased to dwell with him, let him not put her away. And the woman which hath an husband that believeth not, and if he be pleased to dwell with her, let her not leave him. For the unbelieving husband is sanctified by the wife, and the unbelieving wife is sanctified by the husband: else were your children unclean; but now are they holy. But if the unbelieving depart, let him depart. A brother or a sister is not under bondage in such cases: but God hath called us to peace. For what knowest thou, O wife, whether thou shalt save thy husband? or how knowest thou, O man, whether thou shalt save thy wife? (1 Corinthians 7:9-16)

Now, there are all sorts of ways to interpret this passage of Scripture, but Evangelicals who believe there are NO grounds for divorce say wives can separate from an abusive spouse, but then can never divorce and remarry. In their minds, remarriage is the same as committing adultery. Rice’s words so incensed me that I withdrew our church from participating in the crusade. That decision made for a bit of family controversy, but I didn’t care. I may have been a complementarian at the time, but I thought wrong to suggest wives couldn’t file for divorce even if their husbands were beating them or abusing them in other ways.

Regular commenter Brian is right when he asserts religion is harmful — especially Evangelical Christianity. Complementarianism is foundational to Evangelical beliefs about marriage and the family. As long as this is so, wives will be considered inferior to their husbands, best suited for bearing children, cooking meals, doing domestic work, and putting out when their husbands ask. Husbands will continue to rule their kingdoms, thinking that doing so is what God commands. And children, seeing this sort of dysfunctional, harmful marriage modeled to them, will follow in their parents’ steps. Until the cycle is broken, complementarianism will live on.