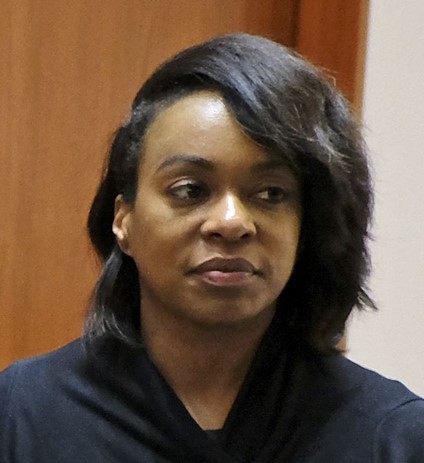 Laura Lloyd, former wife of convicted felon Cordell Jenkins (an Evangelical pastor) , was sentenced to 21 months in prison for lying to federal prosecutors.

After reading a multitude of explicit text messages that showed her then-husband was one of three pastors involved in sex-trafficking a teen girl, Laura Lloyd should have gone straight to notify authorities, a federal court judge said Tuesday.

Instead of helping the victim, the former Lucas County administrator was more concerned with protecting her own image, said Judge Jack Zouhary. He sentenced her to 21 months in prison for lying to federal investigators about her knowledge of the child sex-trafficking scheme at the hands of pastors Cordell Jenkins, Anthony Haynes, and Kenneth Butler.

Lloyd previously entered a guilty plea to lying to federal investigators after she lied about various details, such as not knowing the victim’s age, if the victim participated in Abundant Life Ministries youth programs, and if Jenkins was associated with Haynes.

She learned about her ex-husband’s involvement when she read a series of text messages for approximately 30 minutes during a March, 2017 meeting with the victim and her guardian. The next day, the victim disclosed the information to a school guidance counselor, starting the investigation.

Instead of notifying police after the meeting, Lloyd called her husband and Haynes to alert them of a likely investigation.

“How cannot that child, who is there with a guardian, be screaming in your ears to help? Yes, you should have done more. I appreciate that you recognize that now,” Judge Zouhary said.

While Judge Zouhary said he empathized with Lloyd that a person may not know how to handle a situation when first receiving shocking news, the victim was someone Lloyd knew and was a member of the same parish.

“I’m frankly perplexed of you spending time online to look at how other people caught in a sex crime are able to survive publicly with that situation and continue with their lives,” the judge said. “The focus with you was, ‘How can I survive this situation?’ ”