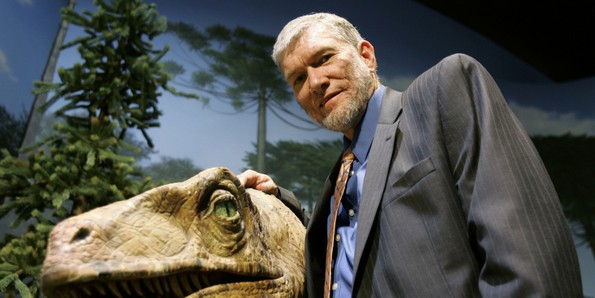 In 2012,  Ken Ham, a young earth creationist, snake oil salesman, and the CEO of Answers in Genesis, warned his followers about the dangers of secularism and atheism:

… Christians today are hungry to be equipped with the resources to fight the battle before us in this increasingly secular culture, where God’s Word is being attacked on nearly every front.

I love teaching children. Once again, as we’ve seen across the country at similar conferences, we were able to reach hundreds of children and young people who attended the special school assembly programs in Florida.

I want to remind you that our theme at AiG for the next two years is “Standing Our Ground, Rescuing Our Kids” as we focus on rescuing them from this present evil age.

Lawrence Krauss is an atheist, and he is an atheist on a mission right now to capture your kids for the anti-God religion of atheism. Think about it—he wants you to hand your kids over to him so he can try to brainwash children into believing they are just animals and that they are not made in the image of God. He wants them to be taught when you die, you rot—and that’s it! In essence, he wants your kids to be captured for the devil.

You know, I often think about why people such as Krauss are so aggressive in preaching their anti-God message of meaninglessness, purposelessness, and hopelessness. We we know that in Romans 1 we are told such people know that God is real, so they “suppress the truth in unrighteousness.” And it’s even more than that. They want the focus on them—it is a self-centeredness. They want you to think they are a god! They have succumbed to the devil’s temptation in Genesis 3:5—they want to be like God—they want to be a god!

Such God-haters like Lawrence Krauss and others usually go ballistic when they hear of AiG teaching kids about Genesis. And they just hate me teaching children the truth about science, origins, and how to think correctly about such matters.

This past Monday in Florida, I taught young children for an hour and a half, covering topics like dinosaurs, fossils, the Flood, creation, evolution, the gospel and much more. I showed them how the history recorded in the Bible explains dinosaurs and that observational science confirms the Bible’s history. Secularists hate me teaching children to think correctly about origins as I help them understand what God taught Job in Job 38:4. God asked Job if he was there when God made the earth. But of course, he wasn’t—and that’s the point. When it comes to origins, no human was there to see the earth come into existence! But God has always been there. Evolutionists were not there to see the supposed millions of years of evolution. So I love to teach the kids to ask the question, “Were you there?” when someone talks about millions of years. The kids get it! The atheists don’t want to get it because they don’t want to give up the starting point for their worldview—i.e., that fallible man determines truth.

I taught the high school students how to understand science in relation to the origins issue by showing them the difference between beliefs about the past and knowledge gained by observation, which enables us to build technology.

Recently, Dr. Krauss made the false statement that evolution is the basis of biology and the basis of technology. Absurd nonsense! I made sure I taught the students how to think correctly about such issues. Then I gave them answers to many of the questions skeptics will use to try to make them doubt God’s Word—questions like these: Who made God? How did Noah fit the animals on the Ark? Isn’t natural selection evolution? What about Carbon dating?…

Evangelicals like Ham love a good conspiracy theory. They believe we are living in the last days and Jesus could return to earth at any moment.  (Though I suspect Ham secretly hopes Jesus doesn’t return before he open his Noah’s Ark Amusement Park.) They also believe the world will become increasingly more sinful the closer we get to the return of Jesus. The rise of secularism and atheism is proof to people like Ham that we are living in the last days.

Ken Ham, and millions of other Evangelicals, believe they are called by God to stand against Satan and his lies. In their eyes, secularism, atheism, humanism, evolution, acceptance of homosexuality, and legalized abortion are Satanic lies that must be exposed and defeated.

Ham is right about one thing; America is becoming more secular. He is also right that the battle for the future of America will be fought in our public schools and universities. Make no mistake about it, secularists, humanists, and atheists believe the kind of Christianity Ham peddles is intellectually harmful and retards the thinking of young people.

And so we fight. No longer do secularists, humanists, and atheists hide in the shadows, fearing the wrath of Christian America. We can sense the tide is turning, and so does Ken Ham.

Secularists, humanists, and atheists use reason and facts to show  young people a better way. They show that there is no need to appeal to myth or religious superstition to explain and understand the world. Science is revealing a universe to us that is amazing and wondrous, but it is also showing that the religious narratives of the past 1,800 years are no longer credible explanations for the world we live in.

Ham does his best to disparage secularists, humanists, and atheists. According to Ham:

Only with his last point does Ham get it right. Secularists, humanists, and atheists plead guilty to being human-centered (though that is not the ONLY focus we have).  We know that focusing on prayer, God, or pronouncements from ancient religious texts will do little to improve the world. In fact, such beliefs might actually cause great harm (Many of the people who deny global climate change do so for religious reasons.)

Ham and his devoted disciples are infuriated that people like Lawrence Krauss say teaching children creationism is child abuse. However, let’s consider for a moment whether Krauss’s claim is true. If creationism is religious fiction, then teaching children it is true is a lie. From the time they can walk and talk, Evangelical Christian children are taught all sorts of lies from the Bible. How can this not have a negative effect on children? (Especially since belief in the creation myth is carried into adult life.)

Teaching children the earth is 6,020 years old, that God killed with a flood every human being save eight a few thousand years ago, and that anyone who does not accept the Evangelical version of the Christian God will be tortured by  God in hell for eternity, is quite harmful to the intellectual development of children.

The waiting rooms of mental health professionals are filled with people who have had their sense of self-worth damaged or destroyed by Christian teachings like original sin. Being told you are wicked, that you can be oppressed or possessed by Satan, and that God holds absolute power of your life, does not make for a healthy mind.

So, to Ken Ham, I say this: Yes we are coming for your children.  We don’t actually want to dine on fat Christian sucklings, but we do hope to expose them as they get older to the wide, wondrous universe we live in. We hope to teach them to think critically and not to accept something as fact just because a preacher declares from the pulpit  God says __________________.

I am not anti-Christian or anti-religion. I am, however, anti-ignorance. I think parents hurt their children when they keep them from ALL the knowledge available about the universe and their place in it.