Finally, A Fundamentalist Who Hates the Duggar Family 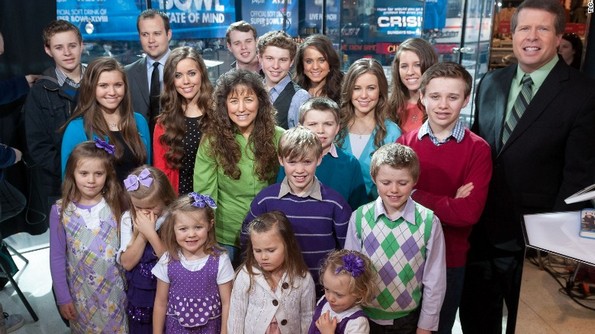 I don’t plan on writing specifically about the Josh Duggar affair. I assume anyone who reads this blog knows all they need to know about Josh Duggar’s molestations of young girls, including his sisters. What I do plan to post are a few quotes from the past week or so that I think readers might find interesting.

– The Duggars, it seems, have always been running in circles known to attract freaks and weirdos. Sadly, many Christians who grow sick of churches pushing birth control, Christian school, and nurseries find themselves attracted to the home church, repentance, patriarchal crowd. From what I have read, it seems the Duggars left a soulwinning, independent Baptist church to join a “home church,” and later got tied in with ATI and Vision Forum, the heads of which have both resigned amidst sex scandals involving much younger women. Guarding our kids against abuse in this day and age is vital.

– I have zero doubt whatsoever that for Joshua Duggar to do what he did (to his own sisters no less), he himself at some time before that, or even at that point in time, was the subject of abuse.

– Not all who are abused become abusers themselves, and it is never an excuse. I do believe that without the perpetrators being punished properly (which would be swift execution), it is virtually impossible for victims to overcome abuse, unless they have the Holy Spirit of God to help them through it.

– The Duggars promote a false gospel that calls for “repentance from sins,” rather than, what the Bible teaches, a turning from false religion or whatever else we are trusting to get us into heaven other than Jesus. While I have know many good Christians who truly were saved become mixed up in this doctrine of “there will be / has to be some change,” many of which later reversed course and realized that their definition of repentance was works salvation, the Duggars push this point more than most, and associate with obviously false prophets such as Ray Comfort and Kirk Cameron, promote the damnable “Hell’s best kept secret,” etc. Because of this, I have only ever given them a 50/50 chance of truly being saved. Unless I talked to them in person, it is impossible for me to give my opinion on it accurately just because as with everything else, they are so wishy-washy it’s hard to put a finger on it. I give their children even less of a chance of being saved, since it seems all they have ever known is this false gospel crowd.

– Being popular and loved by the world is another sign of a false prophet. Then again, while the Duggars enjoyed immense popularity, it was hardly for their Bible preaching/teaching, but rather for their unusual family size and lifestyle. Remember, the show does not promote virtually any doctrine, at all. Besides, they had vehement and vocal haters, too. So their rock star status may or may not be an indicator of being a false prophet.

– It is ridiculous of all these Christian blogs to go on and on about how we are all sinners, we all need grace and forgiveness, etc. Yes, that is all true – but we are not all pedophiles. That is an unnatural desire, only experienced by a reprobate. Even the world, which is happy to excuse most sins and licentious living, is still horrified by child abuse. No, forgiving a pedophile is not a great picture of what the gospel is all about. They have crossed a line where not even God is willing to forgive – why should we?

– Yet with all that being said, and I know I will draw immense hate for this from the trolls on this site, I am not convinced beyond any doubt that Josh Duggar himself had reached that point of being a reprobate pedophile when he did what he did.

One report stated the incident took place the month he turned 14 years old. I consider anyone that is pre-puberty to be a child. Our oldest, who will be 14 in September, is just now in the very beginning stages of puberty from all I can ascertain (thank you, growth hormone-free meat and dairy). Even for a child of course such behavior is vile, perverted, and sinful, and they should and often do know better. But they are not always acting on their own lusts and desires, but in foolishness they are acting out what they themselves have been exposed to. The unpardonable sin of sexual deviance is the fact that they burn with lust after the same gender, after animals, after (in this case) children. Is that what Josh Duggar felt at age 14, or was he, who I am sure was a victim of abuse himself since his family runs in circles replete with reprobates, just acting out the abuse carried out on him earlier, or even at that time? I have no way of knowing the answer to this question for sure. Neither do I need to know, since it is between him and God. He doesn’t go to my church or ever have access to my kids, so I need not waste my time trying to make this important distinction.

My heart breaks for the victims, who will only be able to get over this by the power of God. I am sickened for the children in the family who likely have never been informed of this before, and whose entire lives have just been turned upside down. Imagine that’s your Dad that was just declared to the world to be a pedophile. The new spouses – were they told of issues their young wives are likely to carry with them for life? How to live with such a burden of shame, that has reached international proportions? What great harm has been done to the Bible and God’s way, by allowing a family to be lifted up to such popularity, when this was sure to come out sooner or later, and waved high and low as a banner for why the Bible is wrong and progressives are right. Who are the people that make a living of trying to dig up past evil on a 14-year old?

It was reckless and irresponsible of the Duggars to allow themselves to rise to stardom, knowing about such “skeletons” in the closet. Even if we set aside “Be sure your sin will find you out,” it was insane to think they could become celebrities, and this not come to light with as many people as were involved in it. Did they consider the repercussions on their son’s life, who would even under the best of circumstances have been reeling to recover from this (if that is even possible)? Did they think the world, who was looking for any way to attack them, was going to look the other way on this? Great shame has been brought upon the cause of Christ through their desire to be rich, popular, or both.

So, a sad story all around, on every level. One that brings shame, to some degree, on anyone who names the name of Christ. e have for years held and publicly stated that the Duggars are liberal and worldly, even as they are known for being ‘fundamentalists.’ Maybe their beliefs are, but what they are publicly willing to take a stand for is weak and anemic.

One comment. I love how Anderson chides the Duggar family for being publicity whores, ignoring the fact that she and her husband have been publicity seekers for years. Steven Anderson goes out of his way to get his name in the press. How is this any different from what the Duggar family is doing? Besides, all of us who are bloggers want, desire, or need the fame and publicity our writing brings. None of us write and hope no one reads it, so Zsuzsanna Anderson is being disingenuous on this point.